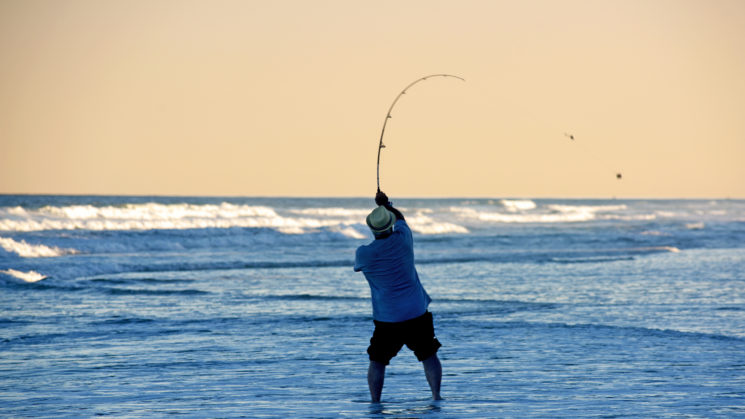 Above: Sunset at Carolina Beach. Photograph by Roger Winstead.

Two fisheries specialists with more than 40 years of combined professional experience have just launched our new blog on marine recreational fishing. Welcome to Hook, Line & Science.To say that saltwater angling is a popular and important activity in North Carolina is a bit of an understatement.

Consider the following: Approximately one in 13 North Carolinians holds a coastal recreational fishing license. In 2016 alone, almost 2 million anglers fished in our state. Of those, about 800,000 were N.C. residents, and just over a million came from out of state to fish our coastal waters. The 13 U.S. Atlantic Coast states, ranked by total number of saltwater anglers in 2016 (includes Florida’s east coast only), according to the most recent data available from NOAA Fisheries.

In fact, North Carolina ranks first among Atlantic states for the number of people who fish recreationally in saltwater off the East Coast. Florida is a close second. No matter how you look at these figures, that’s a lot of people enjoying our coast and its resources.

One of our duties as fisheries specialists with North Carolina Sea Grant is to share relevant scientific discoveries with individuals who work, play and live along the coast — including anglers. We also listen to ideas from all fishermen and share their observations and thoughts with the research and management community.

To better serve saltwater anglers, we mailed a survey to 1,000 coastal recreational fishing license holders across the state. One finding showed that respondents were keen on learning about fisheries research. We also found out lots of other cool things about N.C. anglers, and we plan to share those discoveries soon.

The survey inspired us to launch Hook, Line & Science. Each week, we’ll summarize new research that could affect anglers in our state.

For example, which hook type works best for catching and releasing a certain species? What percentage of boating-related deaths are attributable to alcohol or lack of life jackets? How do non-native invasive species impact local, sought-after sport fish? If you only had time to go to one reef site on your next trip, should you seek out a natural reef or an artificial one? How do hurricanes affect coastal waters and fishing?

Our focus will be on completed research. But, we expect to profile some research in progress if we think that the work matters to anglers. Some research will take place in North Carolina, but certainly not all. And who knows? Maybe some of our posts will help anglers catch more fish!

Interest is high in this new project, and we hope you’ll check back every Monday morning to read about our new research finds.

from the Autumn 2018 issue of Coastwatch