North Carolina Sea Grant currently supports a three-year Core Project that is studying how salt marshes migrate over time. Antonio Rodriguez, a coastal geologist at the UNC-CH Institute of Marine Sciences, is collecting data at 40 coastal sites in North Carolina  His team will share their results with scientists, coastal managers and restoration practitioners, as well as develop educational materials for grades 6 to 12. Carson Miller (above), a graduate student in marine sciences at UNC-Chapel Hill, works with the team and has provided this update.

Across the entire North Carolina coast, locals and transplants are itching to move closer and closer to the water. Drawn to the iconic coastal views, maritime activities and lower real estate prices, more people are developing property along the saltmarsh-upland forest boundary. This boundary resides where the marsh meets the tree line. Because it is both economically and environmentally important, we must understand how this boundary migrates.

The saltmarsh that fronts the upland forest boundary is crucial for many reasons: water purification, erosion control and coastal protection, fish habitats, and recreation, as well as carbon sequestration, the process that removes carbon dioxide from the air.

Globally, however, saltmarsh area is declining. Marshes face both natural and human stressors on seaward and landward edges, also known as “coastal squeeze.”

Normally, a saltmarsh can move freely and offset stressors that cause erosion, such as sea level rise, storms, and boat wakes on the estuarine edge. However, when humans develop the upland boundary, marshes no longer have the ability move landward (“transgression”), leading to coastal squeeze. 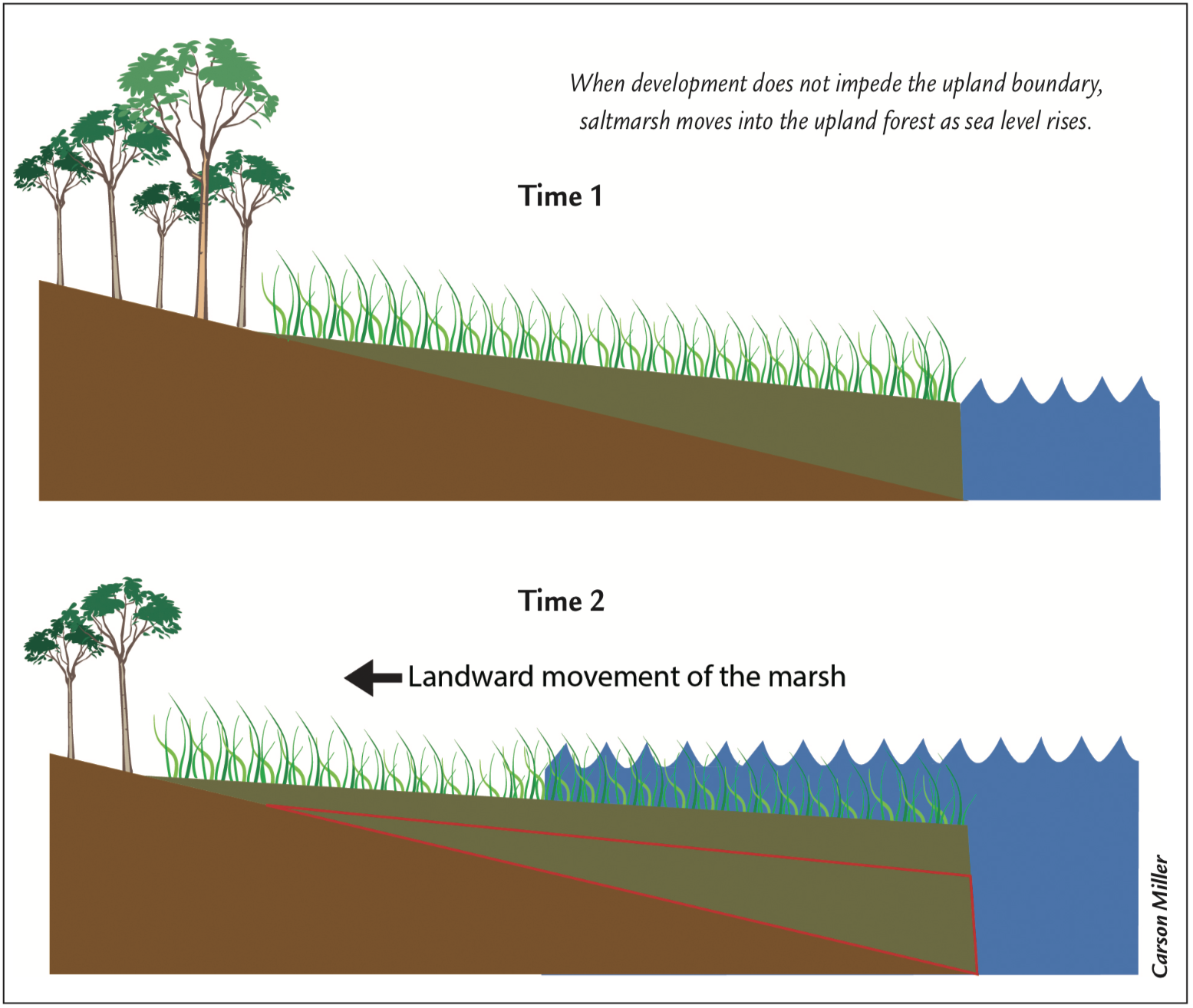 Over the past year, our lab has been sampling sites across ramp and scarped upland gradients in North Carolina. The ultimate goal is to better understand how sea level influences saltmarsh transgression.

So far, we’ve taken 31 sediment cores at 4 different sites: scarps at Shallotte and Newport and ramps at Cedar Island and Hobucken. After we took core transects — a series of cores perpendicular to the marsh shoreline — we brought the cores back to the lab, cut them in half, and examined them (top photo).

We weren’t expecting to find “regressive” (seaward moving) marsh that fronted the steep scarped boundaries — but cores at both scarp sites showed regression.

We radiocarbon dated our marshes as “modern”, meaning they formed after 1950. We then focused on the Newport site and determined a massive increase in marsh area between 1964 and 1975. In the watershed, a project to grow and cultivate trees had begun in 1964, which increased suspended sediment in the estuary and promoted marsh growth. After 1975, marsh growth slowed and remained relatively stable.

So what does this all mean for saltmarsh management? Should these marshes be protected or left to erode, returning the coast to a natural state? Without the additional sediment from human activity, after all, these marshes wouldn’t normally have formed as they did.

With limited resources, managers need to identify the ecosystem benefits most important for an area when considering which saltmarsh should receive protection from wave erosion. Managing older marshes — which have been providing ecosystem services for thousands of years and contain rich carbon stocks — might be a better use of resources. On the other hand, new marshes offer other ecosystem services, such as fishing sites, but will most likely require erosion-control structures to succeed.

In any case, because it’s nearly impossible to know the age of a saltmarsh from its surface, cores that sample the entire marsh thickness are important when deciding how best to conserve these fragile habitats.

Lead photo: Carson Miller cuts sediment cores in half to get a look at marsh history.