BY COREY DAVIS AND KATHIE DELLO

featuring a special sidebar
What to Expect from Climate Change:
Projections from the North Carolina Climate Science Report

We’re moving rapidly into a different North Carolina than the one we used to know. Will 2020 surpass last year and bring even more record heat?

Those warm days last December when temperatures touched the 70s didn’t just make you pull out the sandals for holiday break. They also helped 2019 secure the title of North Carolina’s warmest year on record.

It’s our best and most accurate measure of surface weather conditions using on-the-ground monitoring sites, which is a fancy way of saying good old-fashioned thermometers and rain gauges. This tried-and-true equipment tells us that 2019 consistently moved the mercury higher than any other year observed.

To break down this record and what it means — and where we’re headed in 2020 — here are the answers to some common questions about climate change in North Carolina.

HOW DID IT HAPPEN?

In short, our temperatures were generally temperate, and our prevailing air masses were typically tropical. Just two months all year — March and November — had below-normal statewide average temperatures, while three others — May, September, and October — all ranked among the top-five warmest.

That early-summer onset and early-fall persistence of heat and humidity were ultimately among the most memorable parts of the year, and they helped make it such a warm one.

A stubborn subtropical high-pressure system made our weather so hot and humid during that time, but much earlier similar weather systems also had set up off our coast and given us a warm finish to the winter. 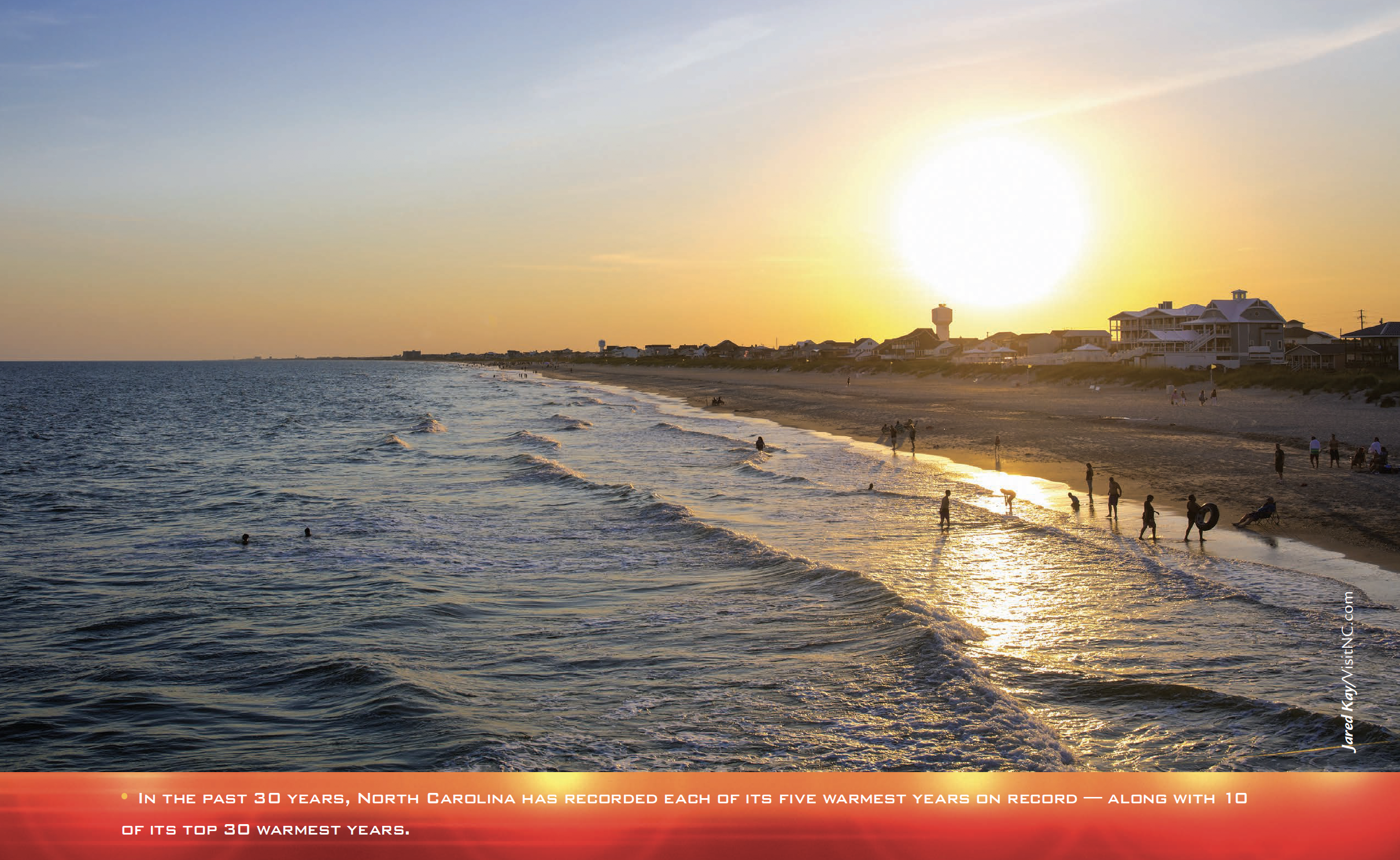 IS THERE A WARMING TREND IN NORTH CAROLINA?

In the past 30 years, North Carolina has recorded each of its five warmest years on record — along with 10 of its top 30 warmest years.

Over that same time, we have recorded zero of our 30 coolest years on record. The last year that cold was 1988 — our 15th-coolest year — when Phil Collins was on top of the Billboard pop charts and the elder George Bush had just won the White House. 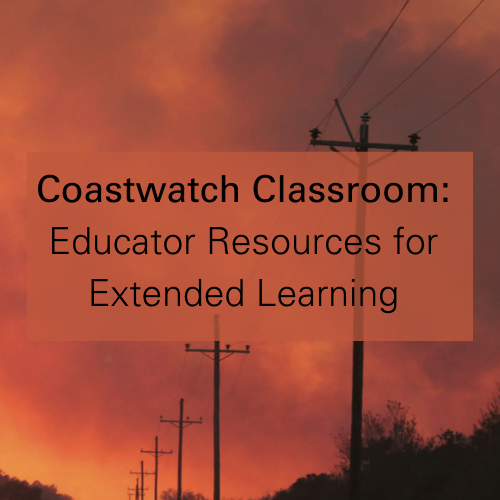 The 80s also was a decade with several extreme cold events, including the state’s infamous “Coldest Day” in January of 1985, when many sites set their all-time record lows, and the Christmas blizzard in 1989 at the coast, which blew through with sub-zero temperatures following it.

That’s another way of showing that it’s been more warm than cool recently, and it’s one sign that North Carolina is experiencing the consequences of a warming planet. Essentially, the climate system is more sensitive to warming nighttime temps, and we see the dominant trend is in our nighttime lows — readings that have consistently pushed some of our recent warm years into the top 10.

We began this year the same way we ended last year — with overall warm weather. January and February were each the 11th-warmest out of the past 126 years, and March was our fifth-warmest on record statewide.

The same large-scale, high-pressure system that made for so many warm months in 2019 was also at play this winter and early spring. However, that pattern relaxed in April, which had near-normal temperatures on average.

When comparing the first four months of the year only, 2020 ranks as the fourth-warmest on record — trailing 2017, the warmest year at the one-third mark, by a little less than a degree. Our average temperature so far this year is also a full 1.7°F warmer than at the same point last year.

Of course, that’s no guarantee that 2020 will top the list of our warmest years as well, especially with several months still to go. But we’re off to a warm start, and many of the same trends we’ve observed in recent years — including the warmth in our nighttime lows — are holding true so far this year. 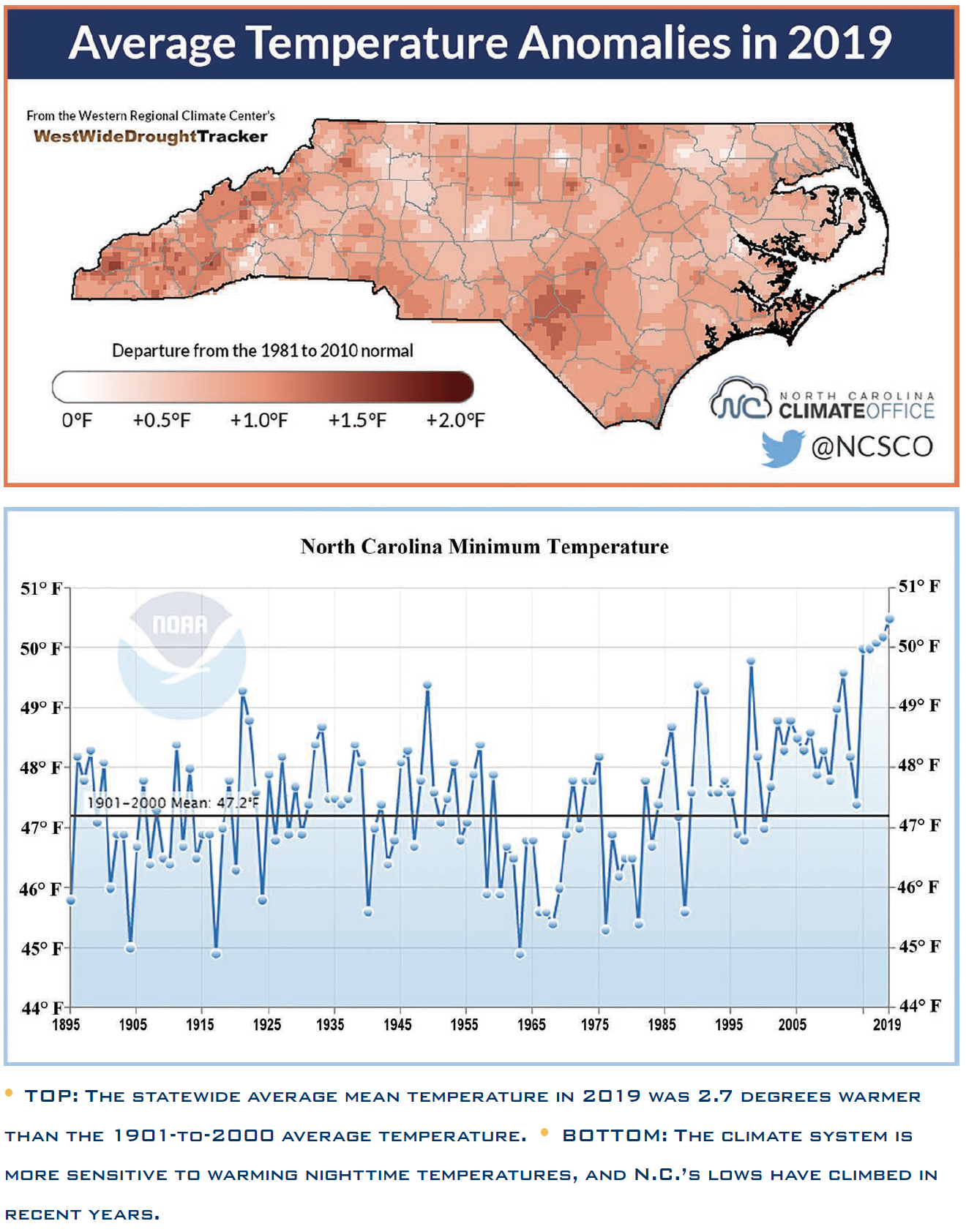 WHAT WILL THIS MEAN FOR FUTURE YEARS?

Even on a warming planet, North Carolina’s climate isn’t a staircase. There’s no guarantee that going forward we will see day-to-day, month-to-month, and year-to-year variability in our weather, and not every year will be warmer than the ones before it.

But if you’re a gambler, we’re stacking the deck with more warm daily temperature records than cool ones. And those warm days and nights add up to warm months, which make for warm years.

There almost certainly will be more record-breakers, based on future global temperature projections. In North Carolina, the climate will warm anywhere from 4°F to 10°F by the end of the century. The addition of heat-trapping greenhouse gases to the atmosphere over a relatively short time means that warmer years are more likely than cooler ones, which is exactly what we’ve already seen over the past three decades.

Small changes in these annual averages mean big shifts in our extremes. Our hottest days and nights are getting hotter.

Not every October will feel like August, as it did in 2019, but that’s likely to become a more common occurrence, especially as the warmer climate creates more evaporation from the oceans, more condensation in the air, and, overall, a more tropical environment that could infiltrate our springs and falls.

Likewise, locations like Raleigh — which is already having more intense and longer heatwaves, according to the National Climate Assessment — may see a transition to a warmer climate more similar to Savannah’s than its historically moderate one.

WHY DOES IT MATTER?

First and foremost, heat is a human health issue. According to the National Weather Service, it is the #1 weather-related killer. And with more extreme temperatures, longer heatwaves, and general socioeconomic disparity, the risks only increase.

More people will be exposed to lethal temperatures. Some of our most sensitive populations in North Carolina lack access to sufficient cooling or live in urban areas covered in asphalt without access to shade. We also have outdoor laborers on our farms and in construction, who face extreme heat during the day and little relief at night.

Although milder winters and faster-emerging springs could extend the growing season and make our climate more hospitable to crops such as citrus fruits, more intense summer heat will also increase the stress on crops and make year-to-year yields more unpredictable.

Stone fruits will lack the chilling hours, or cooler temperatures, required for their development. That’s not speculation; it’s a phenomenon that peach farmers in Georgia are already facing. Likewise, the things we grow in North Carolina are accustomed to a specific climate.

In addition, with those longer growing seasons and extended warm periods, we could see the emergence of things we don’t want: more weeds, pests, and invasive species. Warmer weather also provides a more hospitable climate for the bugs that carry vector-borne diseases.

We’re moving rapidly into a different North Carolina than the one we used to know. It is warmer, wetter, and generally more prone to extremes of intense daytime heat, hot nights, and heavy downpours.

Yet, drought and wildfire are also part of North Carolina’s climate, and our state remains susceptible to the same growing extreme we’ve seen on the West Coast.

Benchmarks like “the warmest year on record” don’t just make for coffee-shop small talk. They’re evidence in the case pointing to a global phenomenon that already affects us here, in our own backyard. 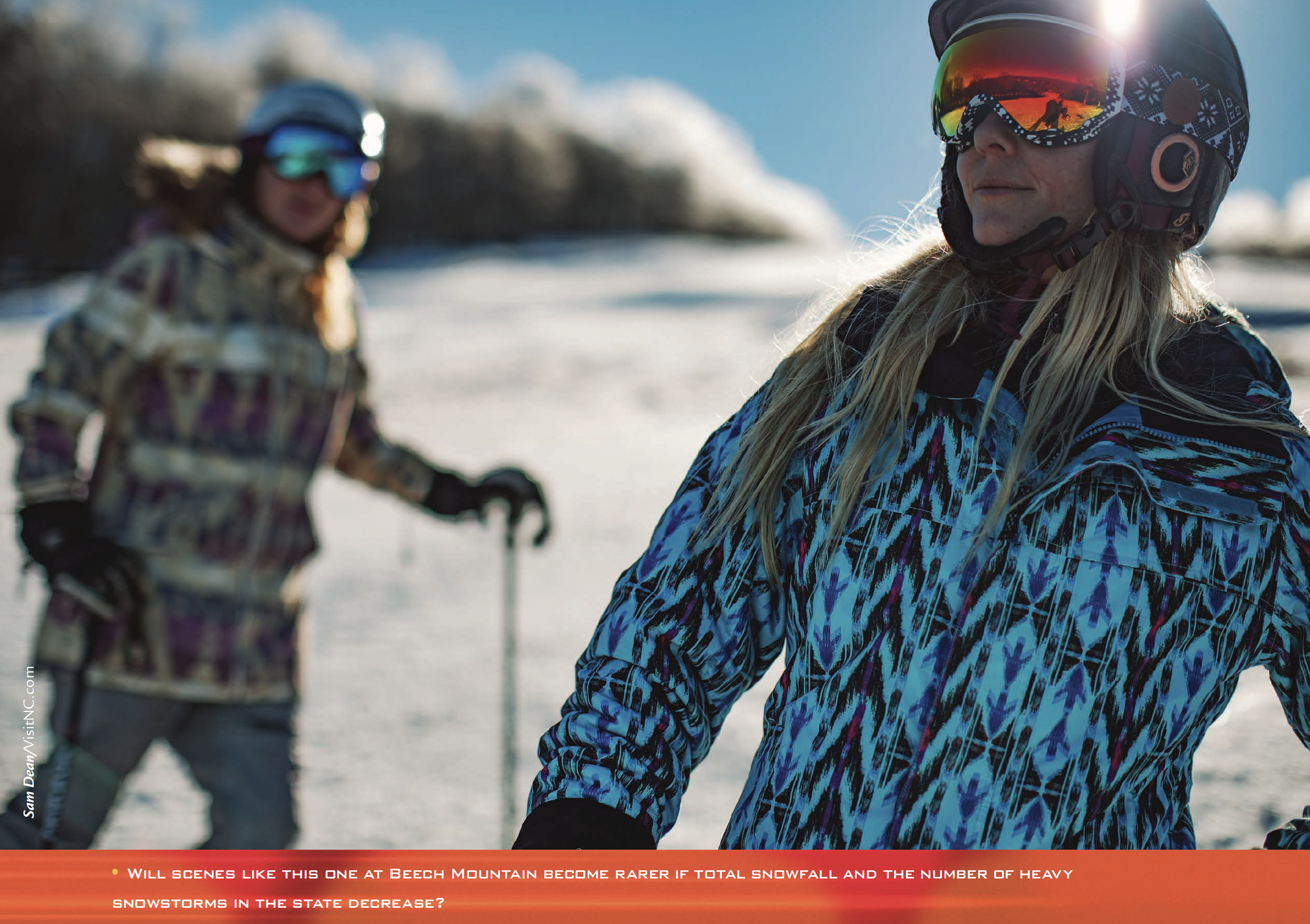 In March, the North Carolina Institute for Climate Studies released the North Carolina Climate Science Report, an independent assessment of observed and projected climate. The report provides crucial information about the past, present, and future of climate change.

The panel based its projections for climate change on what the report calls “the virtual certainty that greenhouse gas concentrations” will continue to rise. As a result, the panel’s overarching conclusion is that “large changes in North Carolina’s climate, much larger than at any time in the state’s history, are very likely by the end of this century.”

The most recent 10 years represent the warmest 10-year period on record in North Carolina.

It is very likely that North Carolina temperatures will increase substantially in all seasons. Annual average temperature increases relative to the recent climate for North Carolina are projected to be 2°F to 5°F by the middle of this century.

It is very likely that the number of warm and very warm nights will increase.

It is very likely that summer heat index values will increase because of increases in absolute humidity.

It is likely that the number of hot and very hot days will increase.

It is likely that the number of cold days (with daytime maximum temperatures below 32°F) will decrease.

There is no long-term trend in annual total precipitation averaged across the state. However, there is an upward trend in the number of heavy rainfall events (3 inches or more in a day), with 2015 to 2018 having seen the greatest number of events since 1900.

It is likely that annual total precipitation for North Carolina will increase.

It is very likely that extreme precipitation frequency and intensity in North Carolina will increase due to increases in atmospheric water vapor content.

It is virtually certain that sea level along the North Carolina coast will continue to rise due to expansion of ocean water from warming and melting of ice on land, such as the Greenland and Antarctic ice sheets. High-tide flooding is projected to become a nearly daily occurrence by 2100.

The intensity of the strongest hurricanes is likely to increase with warming, and this could result in stronger hurricanes impacting North Carolina. Confidence in this result is high for global hurricane changes but lower for North Carolina specifically.

Heavy precipitation accompanying hurricanes that pass near or over North Carolina is very likely to increase, which would in turn increase the potential for freshwater flooding in the state.

There is low confidence in predicting future changes in the number of landfalling hurricanes in North Carolina.

It is likely that the frequency of severe thunderstorms in North Carolina will increase.

It is virtually certain that rising sea level and increasing intensity of coastal storms, especially hurricanes, will lead to an increase in storm surge flooding in coastal North Carolina.

It is likely that increases in extreme precipitation will lead to increases in inland flooding in North Carolina.

It is likely that future urban growth will increase the magnitude of the urban heat island effect, with stronger warming in North Carolina urban centers. 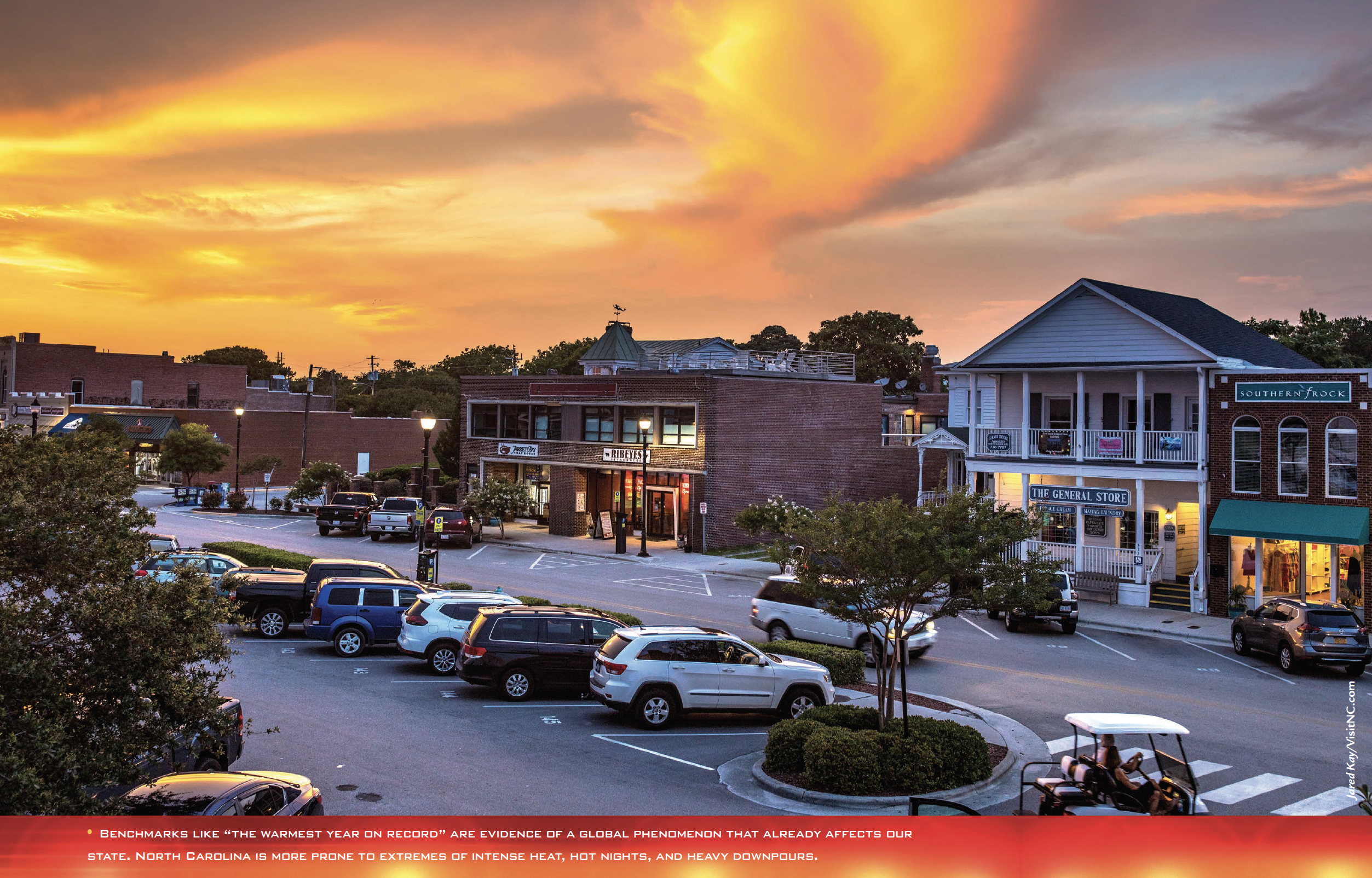 Corey Davis is an applied climatologist at the North Carolina State Climate Office and an NC State graduate with a bachelor’s degree in meteorology and a master’s in atmospheric science. Born in the Triad and now based in the Triangle, Corey has spent his life observing North Carolina’s weather – from hurricanes to humidity to those fickle snow and ice storms – and he now writes about it for the State Climate Office’s Climate Blog: climate.ncsu.edu/climateblog.

Kathie Dello is the state climatologist of North Carolina and the director of the North Carolina State Climate Office at NC State University. She is originally from New York State and most recently spent a decade in Oregon, where she earned her Ph.D. in environmental science from Oregon State University. Kathie moved to North Carolina last year and loves all that it has to offer: good food, green space, mountains, and the beach.

lead photo: Climate change likely will create more frequent conditions for wildfires like the one in Whipping Creek, N.C. Courtesy of the U.S. Department of Agriculture.