Above: Events in the aftermath of Hurricane Katrina are part of what informed Delandra Clark’s interest in environmental engineering. Photo: Andrea Booher

Career guides offer murky explanations about what environmental engineers do.

I recall the skeptical look on my mother’s face when I recited the typical job description: “I’ll use science to solve environmental problems.” Her puckered brow suggested she heard, “I’ll hug trees for a living.”

Ripples of doubt about my chosen major began seeping into my own mind in 2019 when, as a college junior, I sat down one early morning at 1 a.m. to register for spring classes. A quick survey of my peers in a GroupMe chat confirmed my suspicion: They also struggled to craft clear definitions of environmental engineering. “I tell people we work with wastewater,” texted one classmate. Another sent a meme of a caped superhero wrangling spreadsheets.

Looking around the deserted library, I popped the last chocolate-covered espresso bean into my mouth and wondered, “Why did I ever decide to pursue this degree when, clearly, I have no idea what I’m doing?”

Eventually I started remembering my connections to the natural environment.

My father was a heavy equipment operator for Local 3, the largest construction trade union in the United States. He worked in waterways across the country dredging rivers, building levees, and creating drainage canals. Flood control solutions like these protect lives and property by forcibly directing flow away from certain locations and towards others.

But when those measures fail, the results can be catastrophic, resulting in disasters such as the bursting levees in New Orleans after Hurricane Katrina, or lesser-known — but still highly destructive — flooding events, such as in rural areas of North Carolina.

Over the years, I have learned that brute-force flood control systems are no longer adequate. Those structures are frequently mangled by the water they were meant to hold back.

I have since realized that my passion is being part of an engineering movement that designs nature-based, resilient infrastructure that protects people and maintains community. 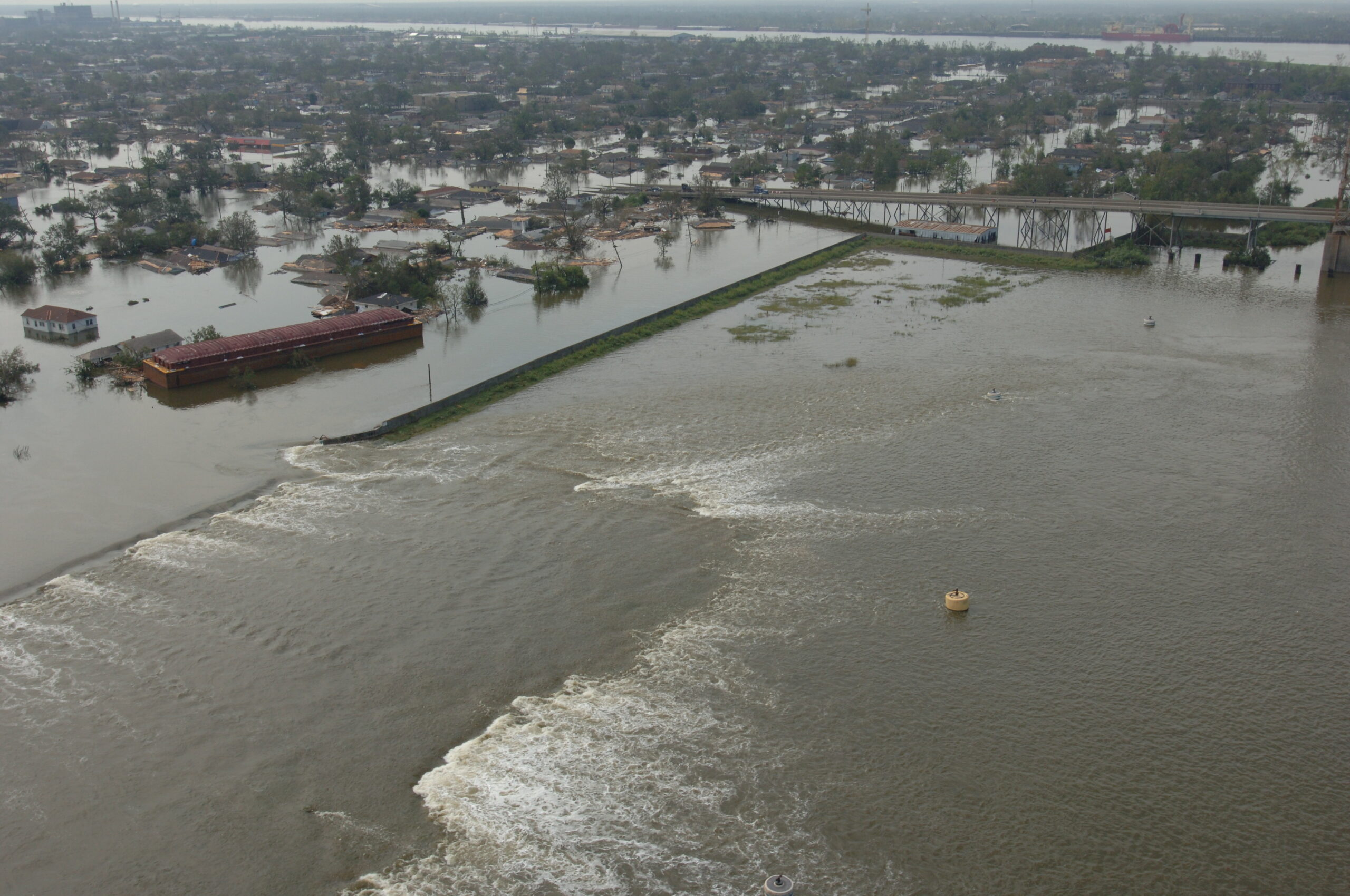 Flood control solutions protect lives and property, but if such measures fail, the results can be catastrophic — like when this levee burst in New Orleans after Katrina. Credit: FEMA.

In 2020, the summer before my senior year, I began working with North Carolina Sea Grant on a study investigating how natural infrastructure can help farming communities in eastern North Carolina manage the risk of flooding across the Coastal Plain.

I was a communications intern and wrote a narrative script for a video highlighting the research team’s collaborative efforts, which focused on Wayne County. As I interviewed engineers, economists, biologists, and designers, I realized that each specialist had a personal connection to the project. I began to see resilience in a different light.

“We can’t wait another 50 years to be proactive,” Michelle Lovejoy, executive director of the NC Foundation for Soil & Water Conservation, told me. Lovejoy coordinates the community outreach events for the project.

She shared a story about driving through Pender County one night in 2019, six months after Hurricane Florence caused mass flooding in the area. Miles of darkened homes suggested the community had all but vanished. Lovejoy wondered if residents would ever be able to return to their farm family way of life.

During this project I often ruminated on the fate of Glen Christina, a family friend of mine. He lived his whole life in New Orleans. Even after Hurricane Katrina flooded his house in 2005 and displaced his family and friends, he couldn’t bring himself to leave the one place where all his memories had been made.

Several years after Katrina made landfall, I received a call from the Orleans Parish coroner. Glen had died alone in his dilapidated home from an untreated abscessed tooth. Someone needed to claim his body to avoid a potter’s field burial (an unidentified grave), and I was on the list of Glen’s most recent cell phone contacts.

Back then, I was convinced that if Glen had been able to repair his damaged home in a timely manner, he’d still be alive. When the weather was wet or cold, he had spent so much time trying to find a s afe shelter that he couldn’t focus on other aspects of health — like making dentist appointments.

Talking with experts during my internship has brought me new perspective on Glen’s situation. The hurricane had not only destroyed his roof but his social network. Friends who would have checked in on him or offered a ride had moved on to other states.

I’ve learned that resilience isn’t just about protecting the built environment. It’s about safeguarding health, transportation, and commerce. It’s about empowering people to support their communities before and after disasters occur.

“Knowing we are going to continue to get hurricanes,” Lovejoy says, “we have to live smarter. It’s about being proactive instead of reactive.” 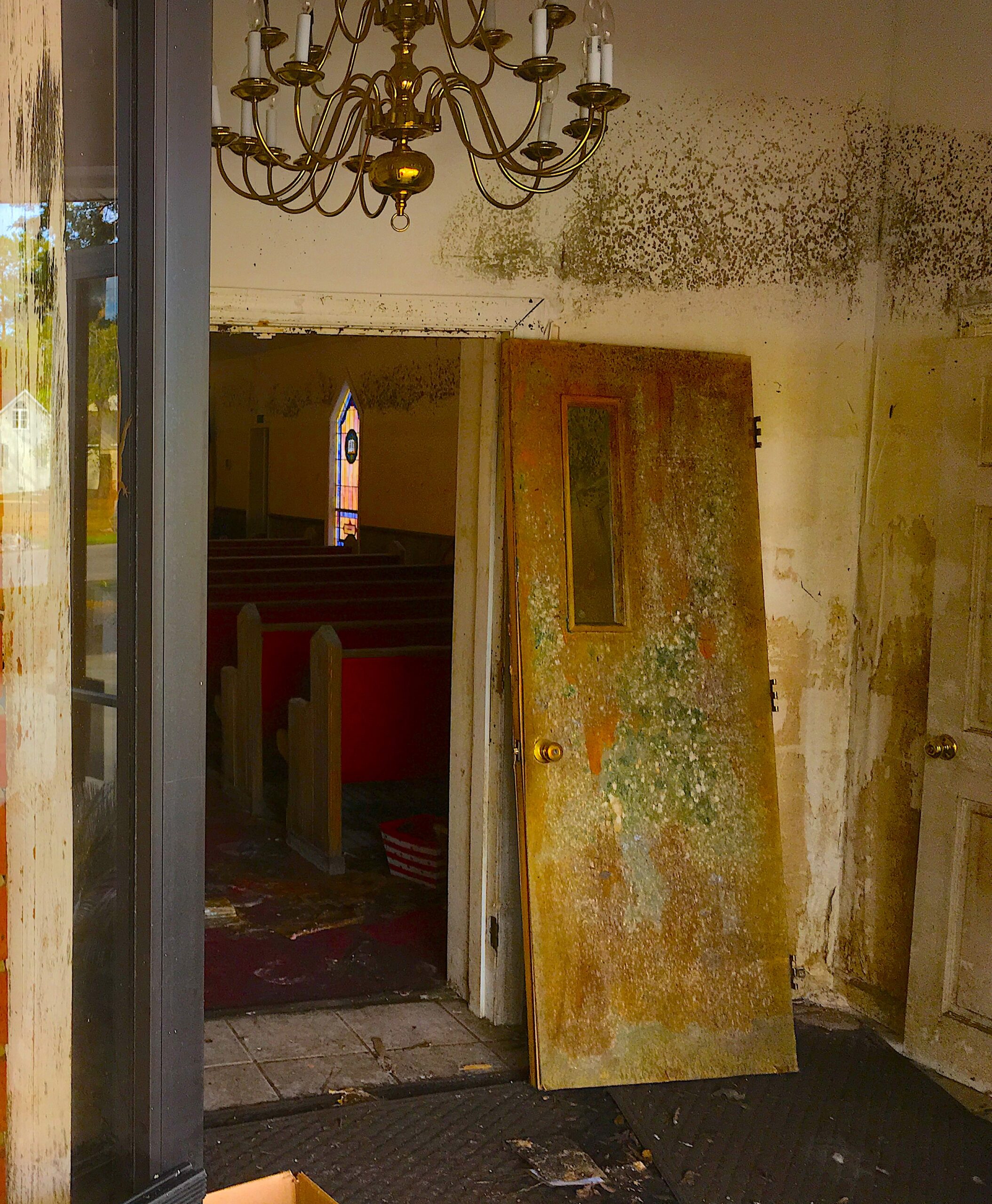 Pender County’s AME Church bore the highwater marks inside and outside, long after Florence had brought mass flooding to the area. Credit: Zach Rudisin/CC-SA-4.0 International.

More and more, communities are considering expanding their resilience strategy to include natural infrastructure. As leader of a North Carolina Sea Grant effort on natural infrastructure and flood mitigation, water resources engineer Barbara Doll is examining how implementing practices like wetland restoration, reforestation, and water farming on private lands can lessen flooding while providing financial benefits to people living in rural areas. (Water farming entails using natural landscapes to store water during floods.) Ultimately, it’s up to local landowners and farmers to decide if these practices are sustainable and make sense for them economically.

As many of my professors have told me, an environmental engineer must be familiar with several disciplines: chemistry, biology, mapping, statistics, soil science, and lots of math. I completed a seemingly endless list of mandatory courses, not really knowing how it all connected. My internship helped me understand.

I have been building a scientific foundation so that I can help guide sustainable development. Communities have greater capacity to weather disasters if they’re given access to necessary scientific information about their risks and vulnerabilities. My role as an environmental engineer will be to equip people with knowledge they need to explore options and advocate for solutions.

Delandra Clark served as a communications intern for a project on natural infrastructure and flood mitigation in eastern North Carolina before graduating in May from NC State University with a bachelor’s degree in environmental engineering.