“Hi. I’m Hollyn Petrock. I’m 15 years old and live in Jacksonville, North Carolina. This is ‘Climate Stories, Youth Report,’ a podcast by Coastal Youth Media and NC Health News, exploring how climate change is shaping our neighbors’ lives in unexpected ways. I’m your host. This podcast is produced by eight youth producers living in rural, coastal North Carolina. Our region is one of the earliest places in the U.S. to be impacted by climate change. After training with professional North Carolina journalists, we embarked as reporters ourselves.”

This is Youth Climate Voices, a series of podcasts that is the fruit of a whole village’s labors — including contributions from high school students and teachers, journalists, multi-media storytellers, subject matter experts, and other supporters who saw the promise of the project.

“It was such an honor to be selected for it,” Hollyn Petrock says of being chosen to narrate the introduction and conclusion of each podcast. “I was a little nervous at first, but once I got the hang of it, I felt pretty confident.”

Petrock was far from a seasoned student journalist when the program began. “I had never really thought about journalism before the project started,” she says. “It 100 percent made me interested in it, so much so I could see myself actually doing it as a career.” 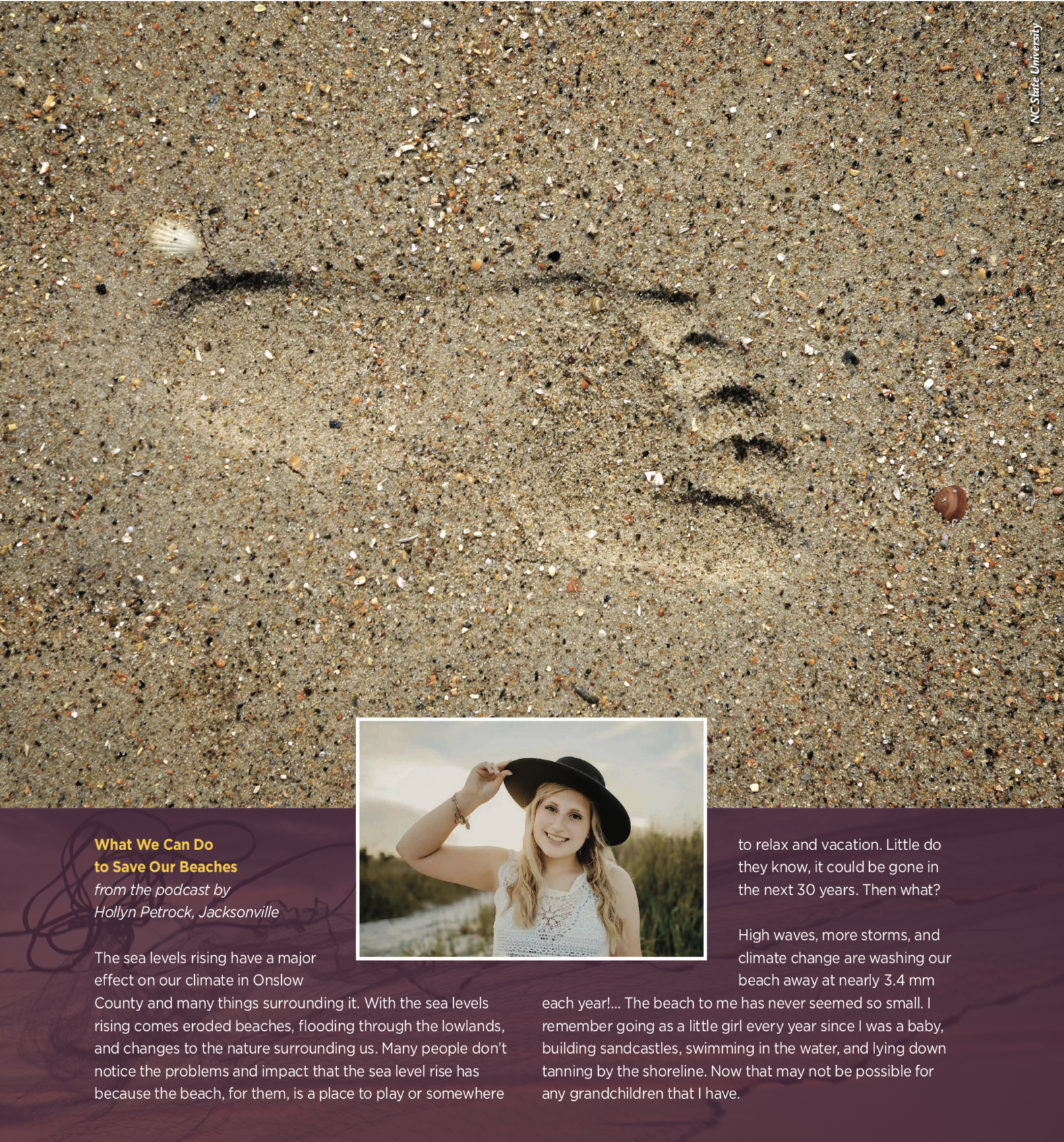 “Young people are interested in storytelling these days,” says Rose Hoban, who founded North Carolina Health News, the online newspaper dedicated to health, healthcare, and health policy news. Hoban originally conceived Youth Climate Voices to focus on teens in smaller communities. “These kids don’t see as many opportunities as kids in big cities do, so they are really excited.”

She also saw a need for more general reporting from the coast — and student reporters offered a solution. 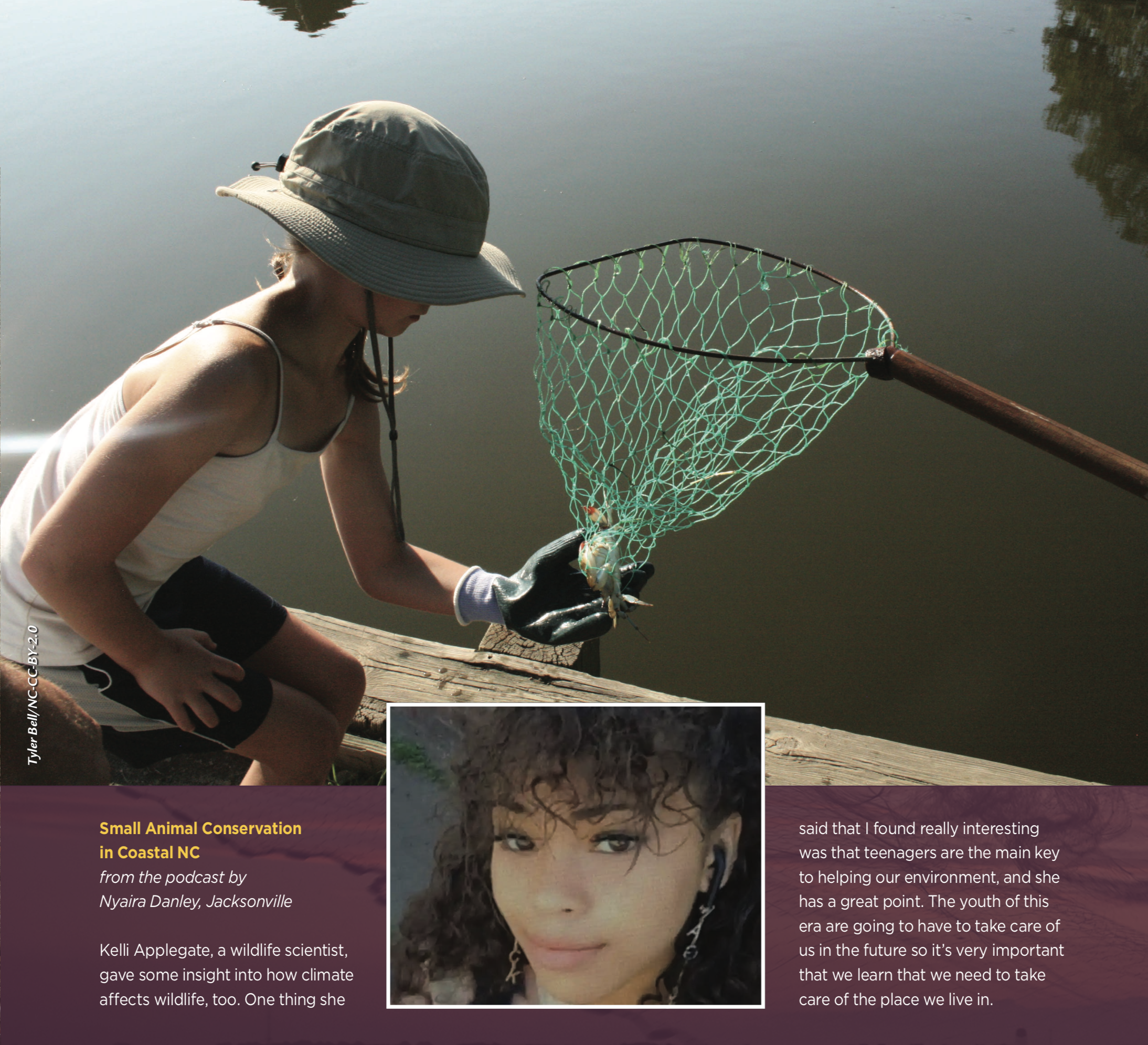 The students in these workshops never fail to impress me,” says Blythe. “They are enthusiastic, curious, creative, and bring a youthful and fresh perspective.”

Sloan, a documentary producer based in Morehead City, helped the students not only with their stories, but also with the technology involved. She often trains people in coastal communities to tell their stories using video, photography, and podcasting, so she had experience guiding people through the process.

“We use the community media-making model,” Sloan explains, “where the teacher is the student is the teacher.” Her work, she adds, develops leadership skills in communities and helps forge strong community bonds, because people come to understand where they live better. 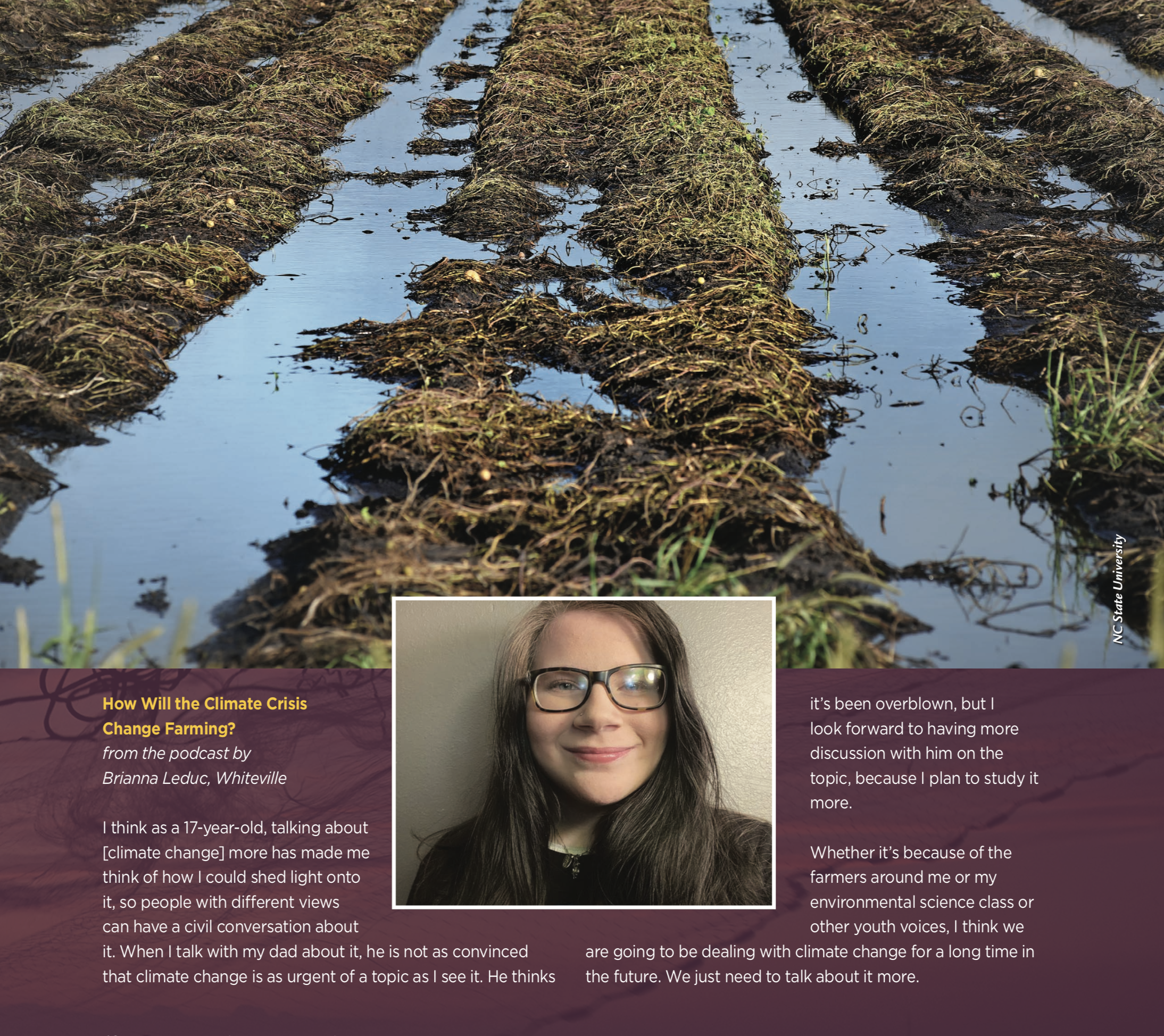 Midway through the Youth Climate Voices project, once they had a model they liked, the team received a key boost from the Community Collaborative Research Grant Program. North Carolina Sea Grant, the Water Resources Research Institute, and the Kenan Institute for Engineering, Technology, and Science (KIETS) offer the CCRG program to strengthen research and outreach partnerships between communities and universities.

“The focus on engaging youth voices is a compelling way to build capacity at the local level for the pressing environmental issues that these students face now and in the future,” says John Fear, deputy director of North Carolina’s Sea Grant and the Water Resources Research Institute.

KIETS associate director Raj Narayan says the project is a good fit with his institute’s goals. 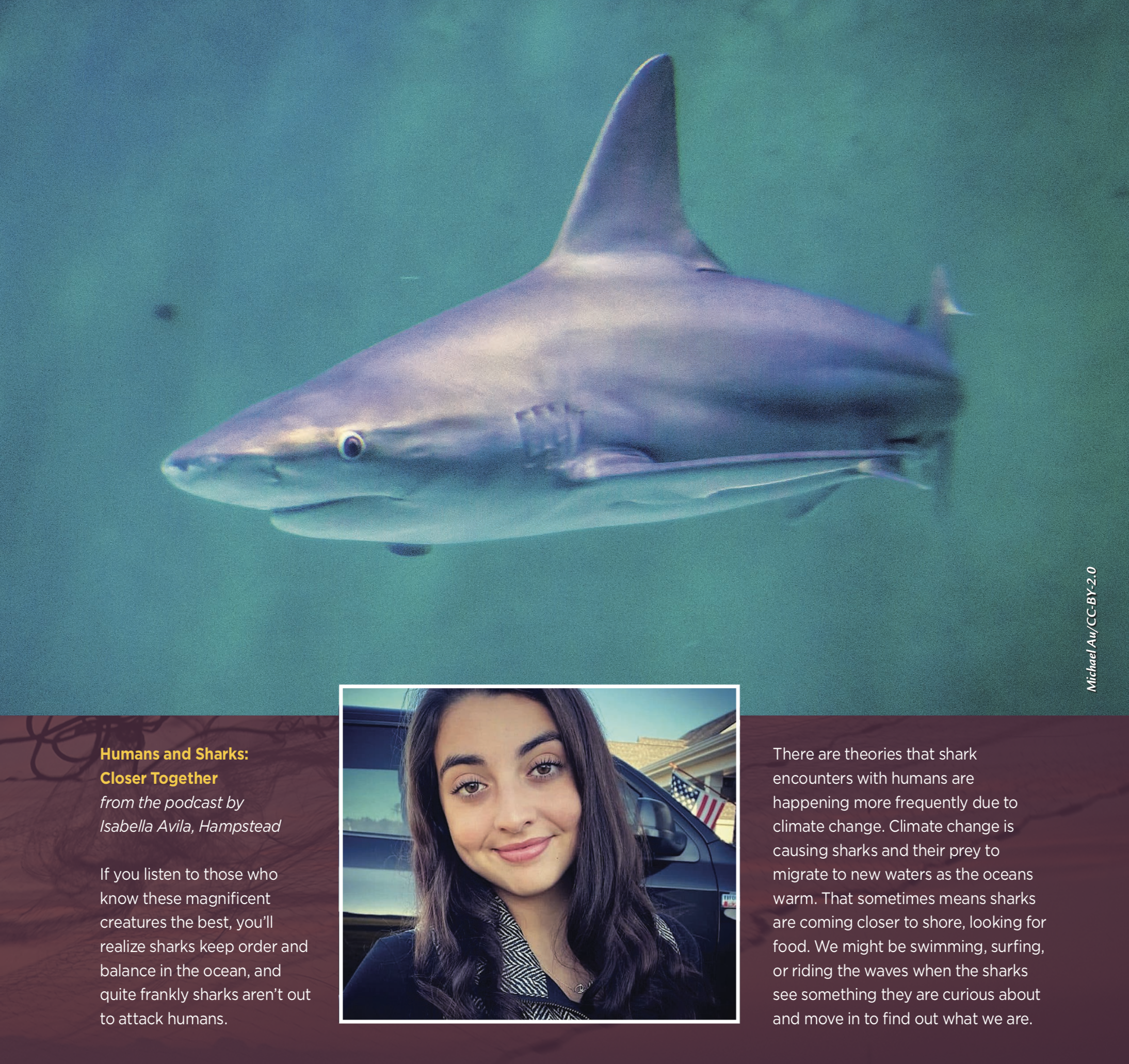 PODCASTING IN A PANDEMIC

Each time the Youth Climate Voices team opened the program for recruitment, it filled quickly, proving to Hoban, Blythe, and Sloan they were onto something.

The team aimed to attract students from coastal counties, like Carteret, Onslow, and Craven. The COVID-19 pandemic precluded in-person workshops, though, and it also sent the North Carolina Health News office into overdrive. This could have blighted Youth Climate Voices for a season, or for good — but instead of postponing or abandoning the project, the team adopted a fully online format.

“COVID took away the opportunity to do live workshops,” says Hoban, “but it did make the workshops more accessible to the students.” Many of the students they wanted to reach live in rural areas, which would have presented difficulties for in-person engagement anyway. However, the age of video conferencing means that many remote students had just as much access as students in the heart of the cities.

During the online sessions, the team led the students through training on the art of the interview, introducing them to common questions and showing them different interview styles.

“The students were very engaged,” Hoban says, adding that they came up with excellent questions. 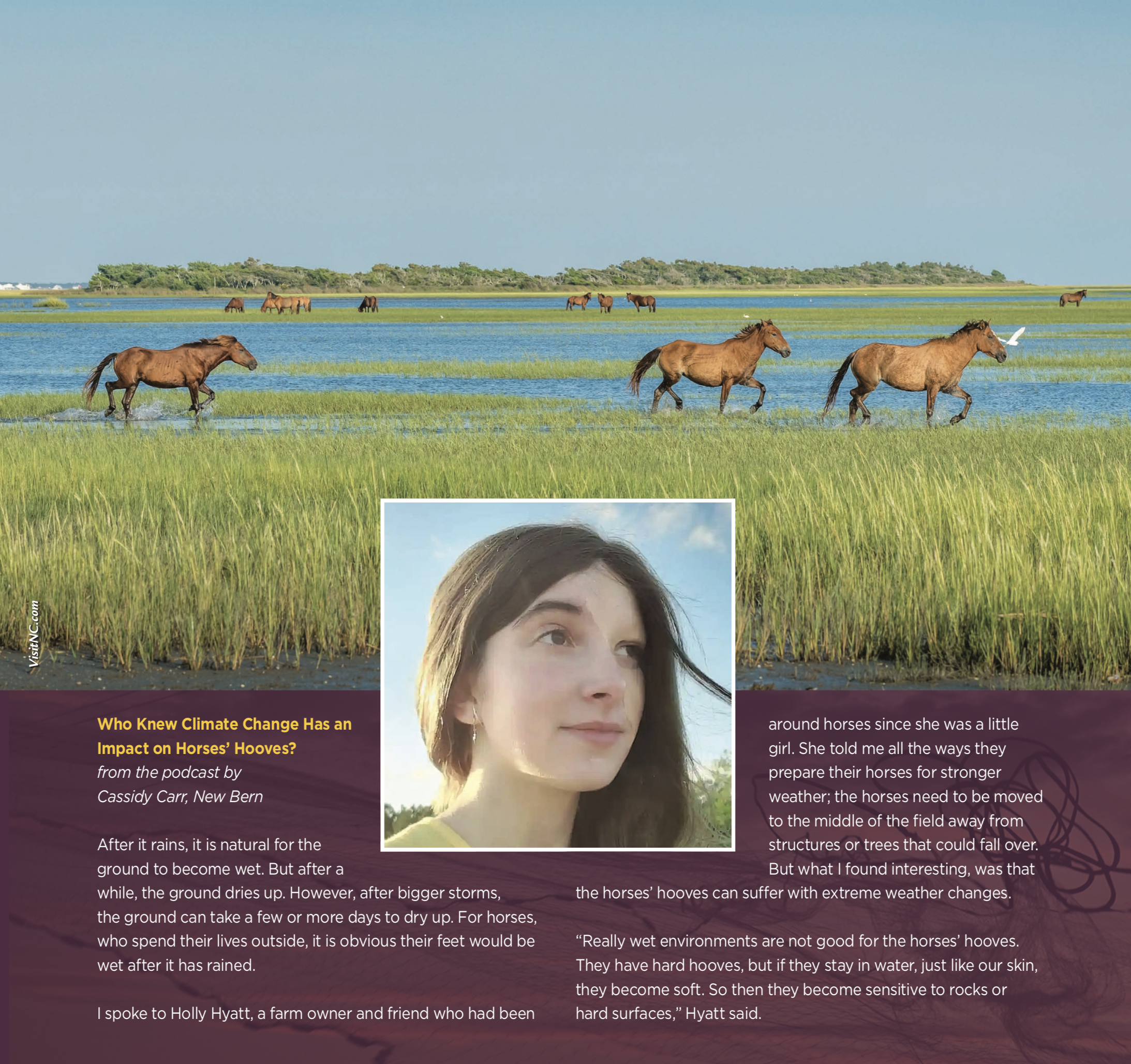 Guest speakers discussed elements of journalism and the students’ individual interests — and Aranzazu Lascurain, assistant university director of the Southeast Climate Adaptation Science Center, became a crowd favorite. With a broad background in environmental conservation and resource planning, she served as the climate expert for the students as they looked for the signs of climate change in their home communities. From the impact on air quality of burning trash in rural areas to the stresses more frequent hurricanes and rain events put on horses’ hooves, students discovered the fingerprints of climate change everywhere. They interviewed relatives, neighbors, and friends, as well as local experts like farmers, fishers, ecologists, veterinarians, aquarium staff, and town mayors.

North Carolina Health News features the podcasts online as “impacts on animals,” “impacts on food and farming,” and “the past, present, and future of climate change.” They also are available on every major podcast platform, with the potential for a global reach.

“What they produced in just days is wide-ranging, far-reaching and, quite frankly, work that wowed us,” Blythe wrote in the introduction to the series. “We’ve compiled those essays and podcasts with hopes that their important voices will lend new depth and perception to an issue that will have great impact on their lives.” 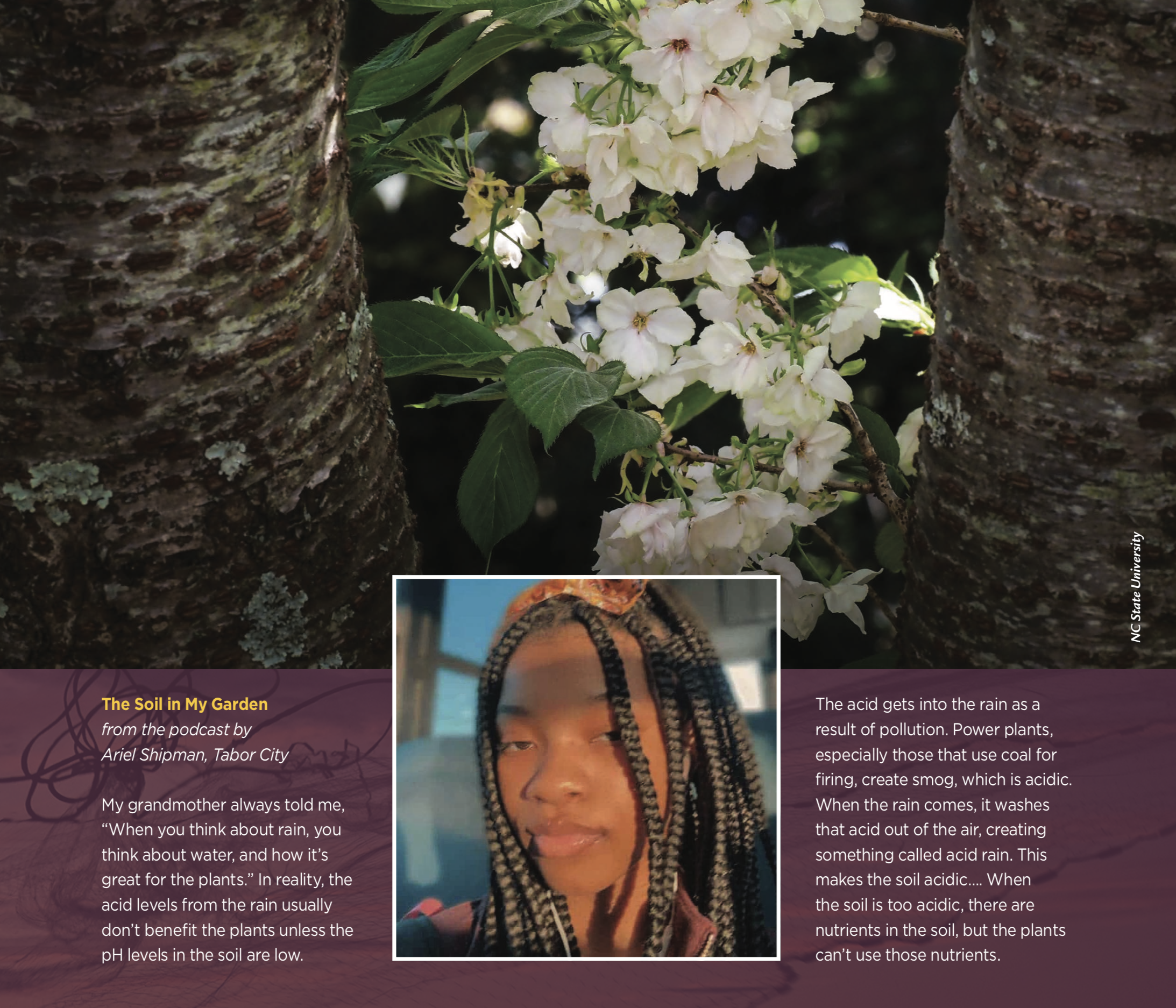 Isabella Avila, one of the students who took part in the workshops, chose to talk about sharks. After interviewing her father, who is a diver, and two local shark experts, she realized sharks are crucial to their ocean environments and not the crazed man-eaters depicted in film.

“That was the coolest part of the whole project,” she says, “that transformation from one mindset to another.”

Since she finished her podcast, she has received praise from quarters she had not expected.

“My creative writing teacher shared it with the whole staff,” she says. “I didn’t know until my guidance counselor came up to me and said she had listened to my podcast. She said she had changed her mind about sharks because of it. That feels good, knowing that I was able to change even just one person’s mind!”

Cassidy Carr, a New Bern high school student who took part in the workshops, began with more of an interest in the visual side of storytelling.

“One of my teachers heard about this project and told me about it because she knew I’m a fan of photography,” Carr says. “My favorite lesson was listening to a photographer talk about the best ways to get a good picture.” 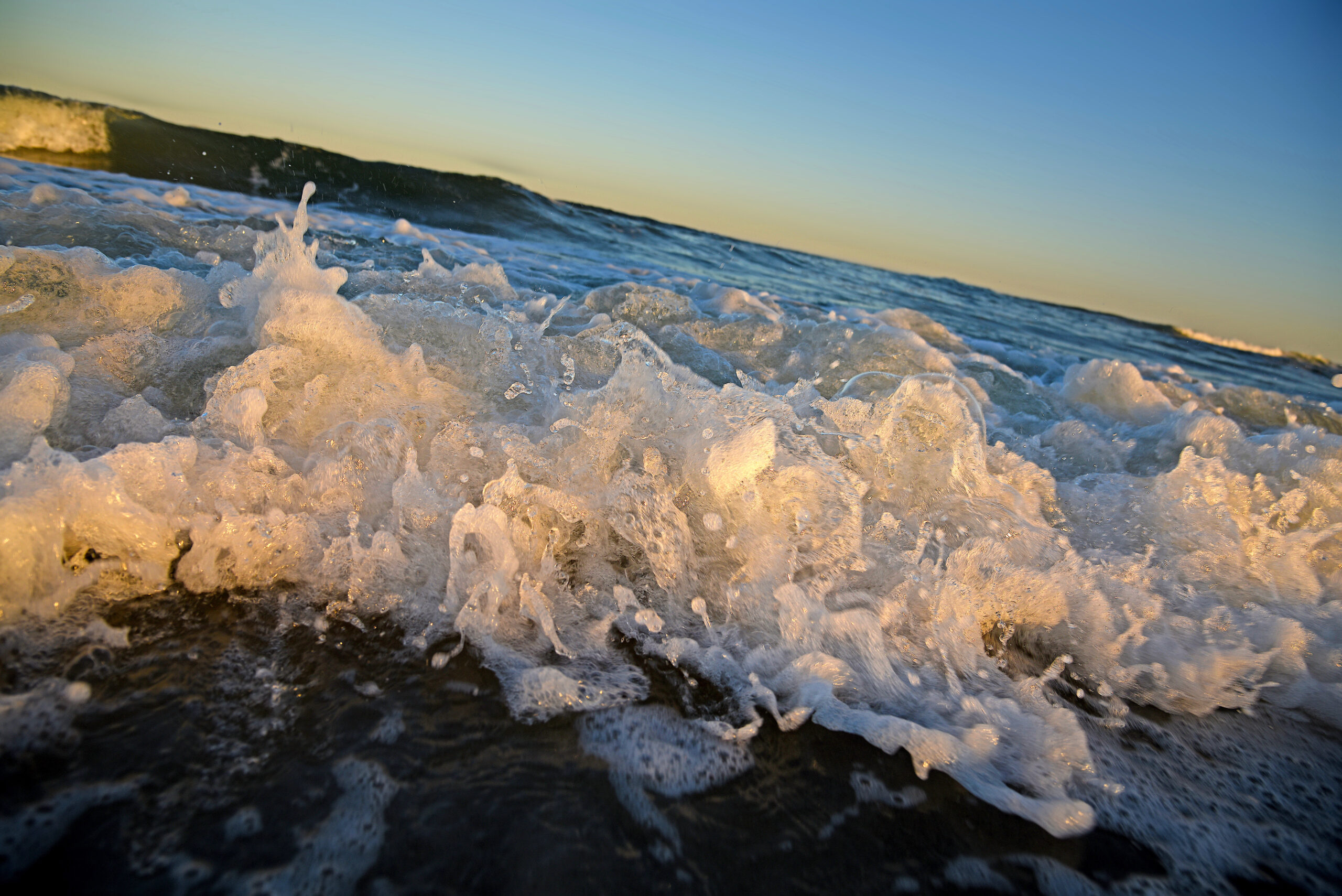 The project was not only a chance to further develop her skills with a camera, she adds, but also a way to explore other facets of storytelling. She also hit upon one of the most unexpected climate change impacts the student group discovered: the damage to horses’ hooves.

“My friend has horses,” she says, “and I remembered her once telling me that she had to evacuate with her horses to New York to avoid one of the hurricanes, because of the risk to the horses and their hooves.”

Ariel Shipman, a high school student in Tabor City, heard about Youth Climate Voices from her broadcasting teacher, who said it would be a great way to use her writing skills.

Shipman says the workshops were informative — and very interactive. “They made us come out of our shells,” she explains. “I gained new social skills, writing skills, and creative skills. I think, in a way, this made me more open to speaking up about new things I’ve come up with.”

With glowing reviews from the students, Hoban and team are hoping to continue the Youth Climate Voices program, with more podcasts from students all over the coast. Witnessing the students grow has provided all the motivation the team needs, as they watch these youth take on new challenges, connect with mentors, and visualize themselves on career paths they never considered before.

As Shipman discovered, “Our imaginations are broader than we think.”