LEGAL TIDES: Repair and Rebuild: After the Storms

The evacuation orders went out and Oak Island residents responded to the need to leave. No one wanted to stare down their late summer, unwanted guest Floyd wobbled just off the coast, threatening to strike with Category 5 deadly force.

By the time he made landfall, Floyd’s wind force had been downgraded. But, as the storm made its way inland, it was clear that the toll would be high for the Brunswick County community of 7,000, Oak Island Mayor Joan Altman recalls. 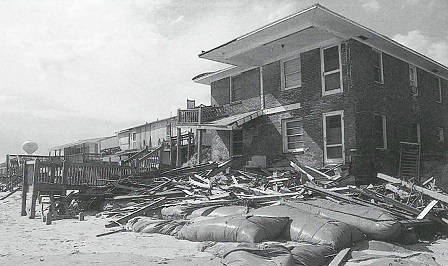 The beach town took a direct hit from a powerful storm surge and a continuous pounding from high tides, torrential rains and flooding.

The sandy beach and man-made dunes along four miles of its 10-mile oceanfront were decimated. Precious beach sand washed across the ocean road and was deposited onto second- and third-row lots.

Floyd destroyed 50 homes. None are likely to be rebuilt on their prestorm sites, Altman says. Waves demolished some of the older cottages and washed away their building lots.

Some newer homes, built according to wind-resistant standards on required deeper pilings, withstood the onslaught. They appear to be intact, but their building lots, septic systems and septic fields now lie under the surf. Relocating these to new lots could be the only option for homeowners.

Others are in what could be called recovery limbo. Some houses that sustained more than 50 percent damage may meet a Coastal Resources Commission (CRC) litmus test for repair or replacement. But, if Floyd has moved the shoreline landward and erased the vegetation line originally used to determine the setback line, it may not meet the new setback requirement. 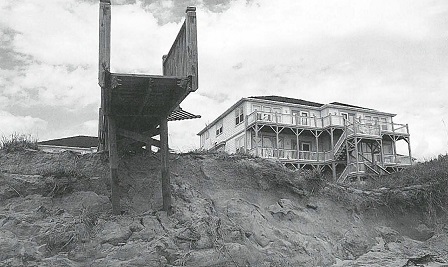 There is little chance that the sand­-starved beach will soon recover through the natural erosion-accretion process. And Oak Island is not due for a major beach renourishment project until 2004, when the U.S. Army Corps of Engineers is slated to pump tons of sand to widen the beaches and construct and vegetate protective dunes.

Though erosion is a way of life for coastal communities, Altman says, “It is still sad. This represents a major loss to our families and to our community.” Many of the lost cottages had been in families for three generations. Others were second homes. Some were rental properties.

From the start, the CRC attempted to balance redevelopment in ocean hazard areas with safety, social and financial considerations. Commission members recognized that North Carolina’s coast is subject to annual threats from storms, shifting coastlines and the natural erosion-rebuilding cycle.

‘The CRC understood that they could not remove all risks associated with living along the coast, so they tried to reduce the dangers by implementing stringent management policies and standards,” Clark explains. 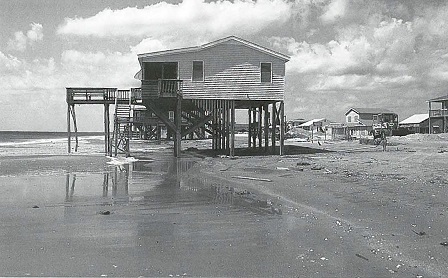 Because large structures pose increased risk to life and property, structures with more than 5,000 square feet require twice the setback — no less than 120 feet from the first line of vegetation.

Shorelines can erode significantly during hurricanes. When the storm passes, property owners, such as those at Oak Island, may have to deal with a variety of situations.

The structure or vacant lot may fall landward of the vegetation line, but within the minimum setback area. If the structure has sustained damage less than 50 percent of its value, the homeowner can institute repairs without a permit. However, if the damage is more than half its value, the property owner must obtain a permit from the N.C. Division of Coastal Management or local government before rebuilding. 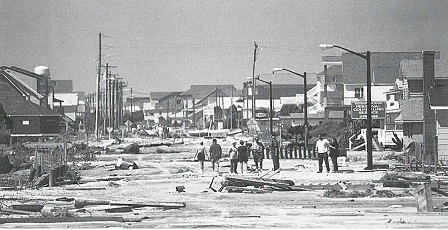 As evidenced by this photo and the ones above, the 1999 hurricane season left some coastal property owners stranded. Photo courtesy of “State Port Pilot”.

Or, the property owner might consider encouraging a community effort to artificially nourish the beach. This is costly, and the first line of stable vegetation becomes permanent at the time beach nourishment begins.

Two more options are available, says Donna Moffitt, director of the Division of Coastal Management. Property owners can hope that the local government will purchase their property under a grant from the Public Beach and Coastal Waterfront Grant Acquisition Program. The program gives priority to lands that have been made unsuitable for development as a result of natural hazards, she explains.

Another option is for landowners to donate their unbuildable lot to the state, local government, or a qualified nonprofit organization in return for a tax credit under the Conservation Tax Credit Program operated by the N.C. Department of Environment and Natural Resources.

Beach bulldozing must adhere to strict regulations. More importantly, beach bulldozing is prohibited during the sea turtle nesting season May 1 through Nov. 15.