Dreaming of a White Winter 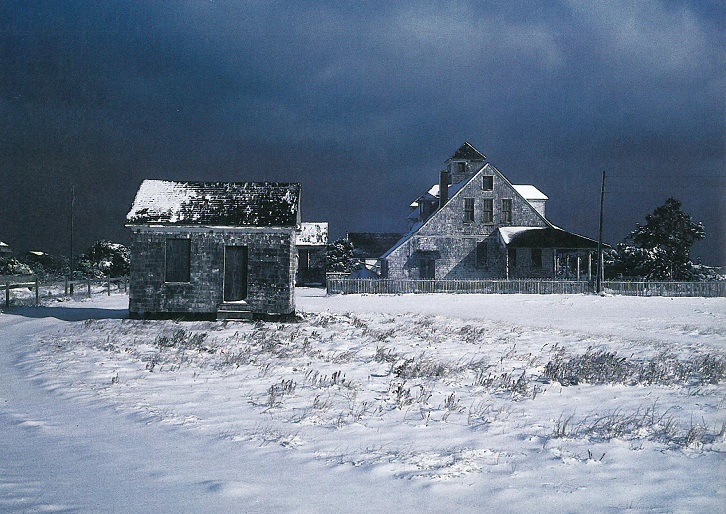 A winter storm on Hatteras Island tranforms the Chicamacomico Lifesaving Station into a snowy wonderland. Photo by Michael Halminski.

If you think that a white Christmas on the Outer Banks is unusual, you haven’t been around as long as Ignatius Doylon Midgett — I.D. to friends. “An Easter Sunday snowfall in 1939 was the heaviest I can ever recall,” he says. 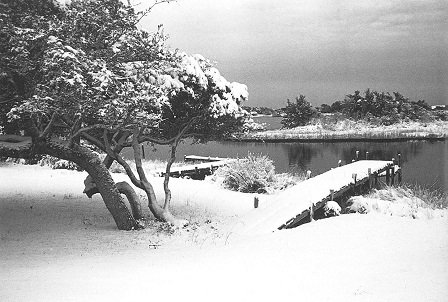 Midgett was about eight years old at the time of the holiday event. “Easter must have come early that year,” he explains. “We had all just been to church when it began snowing. By night, we were snowed in. It was not a blizzard, but one of those gentle, quiet snowfalls. The snowflakes were the size of silver dollars.”

Normal day-to-day activities were put on hold until the snow melted in a day or so. “We had no sleds, but we found other ways to enjoy the snow while it lasted,” Midgett says.

A snowstorm in 1946 also stands out in his mind. “My father was on leave from the Coast Guard Station at Chicamacomico. We plowed through the snow to hunt geese and ducks.”

Midgett, a retired ferry captain, says his adult winter memories are not so fond. He reports that, “Everything pretty much stops with Nor’easters. They can blow the water out of the sounds and pile it up as ice along the opposite shore.”

That’s how 82-year-old Roy White of Knotts Island remembers it in Currituck County as well. 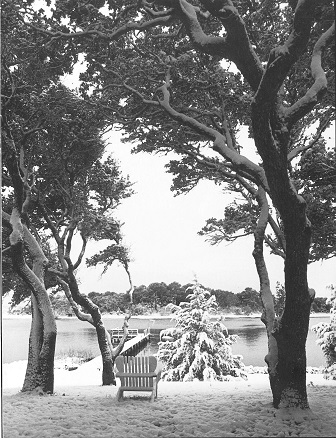 As a youngster, White worked with his father as a hunting guide. “My daddy operated Pud White’s Hunting Club from 1922 until 1948. I can remember having to break through the ice to get to the duck blinds,” White recalls. “At times, the bay would freeze so hard that we had to put skids under the boats.” 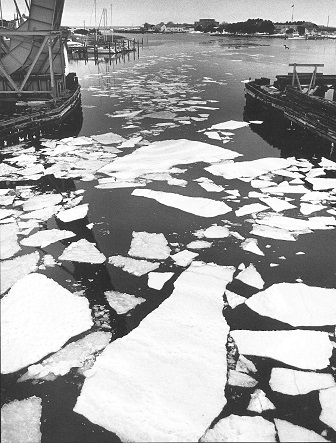 As for snow, he remembers a storm in 1937 that dumped about two feet of snow on the island. The wind piled it into drifts above his head. “We had no sleds or skis. We just put boards under our feet and slid around,” he recalls.

Residents in isolated communities such as Knotts Island had to be self-sufficient, White says. “When I was a youngster, my family prepared for hard winters. There were 11 of us children and no supermarkets to run to. My father would slaughter eight or ten hogs and put them up in the smokehouse. My mother always canned all kinds of vegetables and made preserves. Potatoes were stored in a root cellar lined with straw. That’s how we got through the winter.”

White says in his adult years he weathered many a tough winter season — with or without snow. Before retiring in 1978, he tended about 300 eel pots for six months every year, and net fished the other months.

“My amount of snow in eastern North Carolina is a lot of snow,” says Ryan P. Boyles, assistant state climatologist.

And snowfall records from a series of weather-reporting stations indicate that residents in coastal communities have had their share of the white stuff — at least one major snowstorm in each decade of the past half century. 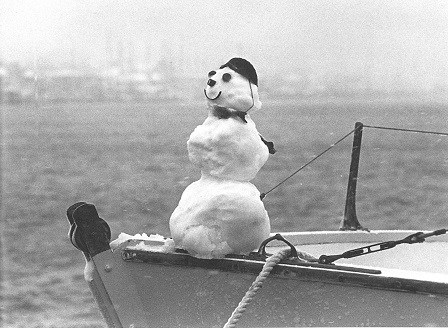 In 1989, they even enjoyed the proverbial “White Christmas” when a surprise winter storm slipped up from the Gulf of Mexico bringing an accumulation of 12 to 18 inches from Southport to Currituck.

Not as pleasant in the memory books was the February 1973 storm that was described in a Wilmington Morning Star story as “the heaviest winter blast since 1896, crippling the eastern part of the state with a foot of snow.” High winds and record tides buckled the Johnny Mercer Pier at Wrightsville Beach and devoured miles of beaches all along the coast.

And, in March 1980, a headline stretching across the front page of the Wilmington paper announced “Rare Blizzard Covers Dixie,” telling of a snowstorm that “shut down all essential activities in the region.” The snow began to fall late on Sunday, March 2. By Monday, the paper said, Wilmington was a “ghost port shrouded in snow.”

Indeed, records of that storm from the State Climate Office at North Carolina State University confirm accumulations of about 18  inches of snow in most coastal towns and inland to Bayboro and Greenville. Elizabeth City recorded a whopping 25 inches of snow.

But some Coastwatch readers’ winter tales reach back further than climate office data.

“You know, winters must have been a lot colder in the old days,” says Knotts Island octogenarian White. “My daddy used to tell stories about the Currituck Sound freezing solid over back in 1899. People drove horse and buggies across to Currituck.”

This article was published in the Holiday 2000 issue of Coastwatch.