From atop the trail, the view is typical of many mountain forests. Lush foliage, steep inclines and animals scurrying about.

But this is not a mountain forest. This is the Cliffs of the Neuse State Park in the small town of Seven Springs, near Goldsboro.

Located right between the Piedmont and the coastal plain, this area — once covered by the Atlantic Ocean — has seen many ecological and economic changes. From dinosaurs to Indians, healing springs and modem-day expansion, these cliffs have a story to tell.

Due to the park’s unusually high elevation and the shade provided by the cliff side, many mountainous plants and animals are intermixed with coastal species. Galax, usually native to the mountains, grows here and even has a hiking trail named after it.

The hiking trails — each shorter than a mile — meander among a variety of trees. There are longleaf and shortleaf pines, hemlocks and eerily beautiful stands of cypress. Spanish moss, the namesake of another trail, hangs from some of these trees. This pale, soft moss once was used as filler for pillows.

Other park inhabitants include fox squirrels, warblers, deer and a bald eagle or two. Bird Trail offers some great views, but the wonderful concert given by the forest’s chirping inhabitants — bird and katydid alike — is the best reason for visiting this trail. 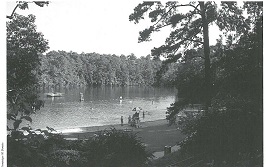 The flora and fauna are not the only aesthetically pleasing sights at the Cliffs of the Neuse. “The geology is fascinating, and the cliff is breathtaking,” says Lundie Spence, North Carolina Sea Grant marine education specialist. “I’m proud that North Carolina has this location open to the public so everyone can see it.”

For educators, the park offers an important instructional tool. ‘The geology is amazing. There is this tiny little museum that is the best, bar none, for describing the geologic history of the coast,” says Spence.

The exhibits also include the history of the plants, animals, and people who have lived in the area of the park. From Native Americans to the early settlers and on to today, the museum shows a little history from all eras.

Though low-tech by today’s standards, the museum’s “Forming of the Cliffs” display is quite impressive. It creates an interactive way of showing the gradual change the Neuse River has undergone due to erosion in the last few million years, resulting in the formation of the cliffs.

Future goals for the park include getting the funding to make the exhibits more handicap-accessible as well as adding a visitors’ center to reinforce the role of the museum, says Dan Smith, park superintendent. The visitors’ center would be a separate building with interactive, computerized exhibits and an auditorium.

A VISION IN MOTION 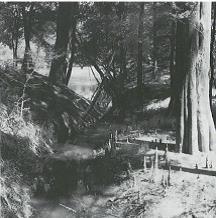 The idea for the park was set in motion in 1945, when Lionel Weil donated a sizeable part of his property towards the construction of the park. Along with a few other landowners, Weil wanted to preserve the land while at the same time making it accessible to the public “fraternity,” says Smith. Unfortunately, Weil died in 1948, the same year that the park opened to the public.

This May, Thomas Drake, assistant professor of geology at North Carolina State University, started a cliff management project to preserve Weil’s vision. Drake’s data would help ”to document and keep a database of the cliff’s movement,” says Smith.

Currently, due to their constant movement, the cliffs are barely visible from the lookout point. With the help of Drake and his students, the park officials hope to make them more accessible and viewable while still preserving the ecology of the area.

Dave Bernstein, one of Drake’s graduate students, says, “When large rains or severe storms come through, large trees will fall and take out a large portion of the cliff.” The group is still finishing the maps and processing the data.

TOP: In earlier times, the view of the cliffs was clear. Photo courtesy of NC Division of Parks and Recreation. BOTTOM: A research project aims to offer a renewed vista. Photo by Dominique M. Donato.

Visitors come to the Seven Springs area because of the unique landscape and opportunities offered at the Cliffs of the Neuse. Similarly, the Tuscarora and Saponi Indians chose the area for their ceremonial grounds many years ago.

‘The uniqueness of the elevation here drew them. We’re right between the Piedmont and the coastal plain,” says Smith. The Indians also took advantage of the medicinal plants found in the area, such as yarrow, used to stop bleeding.

This tradition of healing continued on into the early 20th century when visitors came to Seven Springs to partake of its fabled waters. Seven Springs was named after its seven natural springs — each reportedly containing a different mineral. Visitors came in hope of easing their ailments in the waters of the springs.

Those that found no relief in bathing in the springs or drinking its cool waters could always find relief in the liquor made from the mysterious waters. Today, the springs are closed and under private ownership.

Still, the Cliffs of the Neuse State Park offers the public the opportunity to swim in spring waters of their own. The swimming lake is fed by five freshwater springs, making the water so clear that one can see straight to the bottom.

When the park opened in 1948, the picnic area was one of the only facilities available. There are now 100 picnic tables on the grounds and 10 grills, shaded by the trees and surrounded by the natural music of the park. The picnic areas are conveniently located near the swimming lake. So, families can enjoy a nice meal and then head to the refreshing, clear waters of the lake to cool off.

During the years that Seven Springs became a center for healing, the Neuse River also became a popular venue for young lovers. On a nice summer evening, young couples could be seen paddling canoes down the river to view the cliffs, a luxury still available today.

Camping is also popular here. ‘We have a lot of repeat campers. They like the family atmosphere and overall quietness,” Smith says. Family camping sites are equipped with picnic tables, grills, water access, and a shower house nearby. There is also more primitive group camping available for avid outdoors enthusiasts.

VISIONS FOR THE FUTURE

The Cliffs of the Neuse have withstood many changes but stand as a lasting reminder of our past, Spence says. ”The location is great. It brings you back to the turn of the century when people used to go to springs to drink and bathe in the water,” she adds.

Because of Weil’s vision, the cliffs’ history and natural beauty will continue to be appreciated even in the face of development that has spread through Wake, Johnston, and Wayne County areas.

The Cliffs of the Neuse were created during the Cretaceous period, some 66 to 90 million years ago. Once, the Atlantic Ocean covered the area where the park now is located until a shift in the fault line caused the cliffs to form on the eastern bank.

The cliffs, extending some 600 feet out and 90 feet up, were formed out of interspersed layers of sand and clay, known as black layer formation. The dark gray to black layers are made of different types of clay — probably deposited from tidal marshes. The white to yellow layers indicate old ocean beaches. Though the cliffs are visible only for 90 feet above the river, the black layer formation extends 200 feet in total.

Fossils found at the cliffs tell the area’s history of life millions of years ago. Once the area was an ocean filled with sharks, bony fish, aquatic turtles and giant crocodiles.

Prehistoric creatures such as the duckbilled dinosaur, ostrich-like coelusaur and dryptosaurus — a relative of the Tyrannosaurus rex — may once have walked on North Carolina soil, while pterosaurs soared through the sky, and mosasaurs occupied the waters.