Corals and Sea Urchins: Two Parts of the Same Story 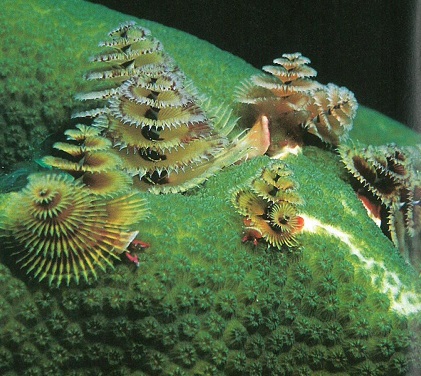 The biodiversity of a coral reef often is compared to that of a tropical rain forest. Bountiful. Lavishly beautiful. Teeming with life. Rich enough in resources to feed and heal Earth’s six billion souls.

Scientists estimate that in recent decades more than one-third of the world’s coral has been destroyed or degraded, and that half of its original rain forest cover has disappeared.

Increased pressure on these natural resources is inevitable — from a world population expected to double by 2060, and from natural phenomena such as global warming.

But Alina Szmant, a marine biologist at the University of North Carolina at Wilmington, refuses to surrender to doom and gloom. She prefers to work toward solutions.

And, she’s not alone. She is among a growing number of marine scientists worldwide working to restore and maintain healthy coral reef communities. Likewise, their counterparts elsewhere in the scientific community are emphasizing sustainable land use and forest management methods.

For a major research initiative by the National Sea Grant College Program, Szmant has mapped out a novel, ecological approach for restoring coral reef habitat in the Florida Keys National Marine Sanctuary.

Her plan is not simple. But if all goes well, it could become a model for reef recovery.

“Corals and sea urchins are two parts of the same story,” she says, explaining her two-front tactic.

This phase of the project builds on Szmant’s earlier research predicting spawning times, collecting spawn, and culturing the larvae for smaller scale laboratory and field experiments. 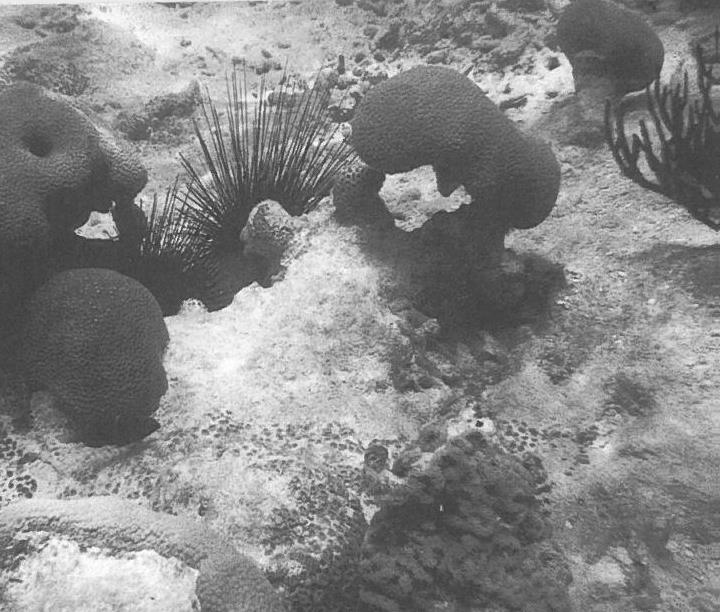 Second, they are attempting to restore a population of the sea urchin Diadema antillarum. Its dramatic die-off in 1983 may have helped tip the ecological balance of the coral reef communities in the Western Atlantic and Caribbean.

Without the herbivorous Diadema, coral reefs in the region gradually became smothered by fleshy algae and thick turfs.

The researchers are developing a mariculture system to rear large numbers of Diadema for release in the designated sanctuary restoration site.

They predict that restoring sea urchin populations will help create clean reef surfaces that are capable of supporting the cultured coral larvae. With the fleshy algae and turf held in check, the scientists also hope to see the return of other keystone members of the coral reef ecosystem.

Inside the living coral polyps, zooxanthellae — “good algae” — provide oxygen and organic compounds. In turn, zooxanthellae receive carbon dioxide from the coral polyps. Additionally, certain species of crustose coralline algae (CCA) are needed on the surface to trigger coral larvae settlement. These good algae were overgrown by fleshy algae and turf with the disappearance of the Diadema.

Szmant has assembled an experienced research team long on the first four attributes. Co-investigators include Margaret Miller, an ecologist with the National Oceanographic and Atmospheric Administration’s Southeast Fisheries Science Center, and Thomas Capo, a senior research associate with the University of Miami’s Rosenstiel School of Marine and Atmospheric Science.

National Sea Grant is providing financial support for the project — more than $400,000 over a two-year period. About $249,000 in matching funds comes from UNC-W, the University of Miami, The Nature Conservancy’s Volunteer Program, and the Institute for Marine Science in Fort Lauderdale.

The ambitious project targets ship-grounding sites on coral reefs in the Florida Keys National Marine Sanctuary. When a ship runs aground on a coral reef, it can damage or destroy an area larger than a football field.

If successful, the techniques will be applicable to the restoration of coral populations in degraded reefs throughout the region, if not the world.

The timeline for culturing coral is dictated by Mother Nature — in more ways than one. During one week of a defined lunar cycle in August or September, star corals release billions of gametes in a mass spawn.

“When all the polyps release their gamete bundles, it looks like a snow globe,” Szmant says. “It’s really quite an incredible sight.”

Star corals release egg-sperm packets, which float to the surface. After fertilization, coral larvae drift, then sink to reseed the reef. But mortality exceeds 95 percent, Szmant explains. The researchers are attempting to gather gametes from spawn and nurture them for transplant onto natural reef formations. 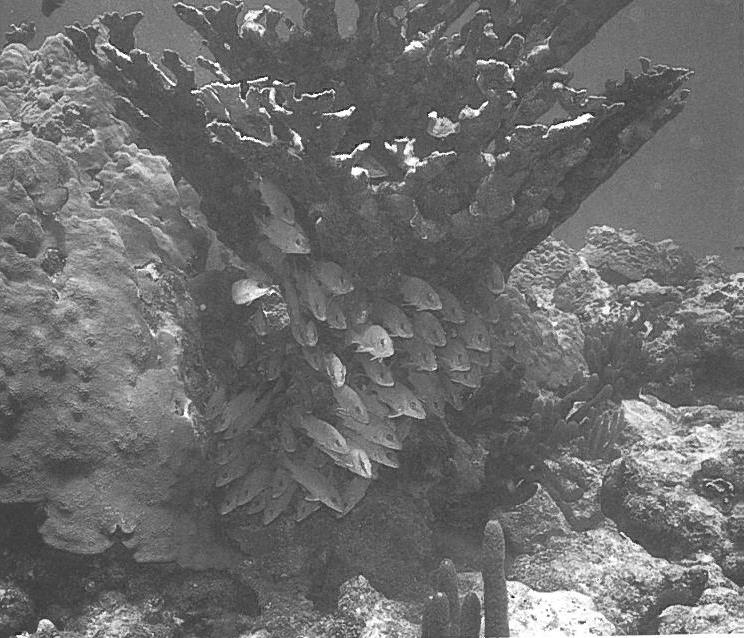 Elkhorn coral survival will get help from a Sea Grant research project. Photo by Alina Szmant.

Late last August, two teams assembled — one in the Florida Keys directed by Miller and the other in Puerto Rico directed by Szmant. Their goal was to capture the shower of gametes with fine mesh nets and immediately culture the larvae in field chambers resembling floating ponds.

“For the batch from the Florida Keys, the idea was to attempt to seed them directly onto reef substrates, and then try to evaluate their success,” Miller recalls.

Unfortunately, when the larvae were about 36 hours old, Hurricane Debbie was bearing down on the region. The Puerto Rico team was first to evacuate.

“It was a major setback when we were forced to shut down and evacuate the Keys,” Miller says. She managed to scoop up a small amount of larvae to use in lab studies, but was not successful in getting them to “settle” on an artificial substrate.

The elkhorn coral is a different matter. “We have less history on what it does from year to year, and it did not spawn this year in the Florida Keys or Puerto Rico,” Szmant says.

“It could be that it still is recovering from the 1998 bleaching episode. When corals lose their major food source, they may not have the energy for reproduction the following summer.”

Coral bleaching she explains, is a major factor in the loss of corals worldwide. Scientists suggest it is caused in part by global warming and associated with elevated water temperatures. It can be exacerbated by ultraviolet radiation or disease.

“The bleaching event in 1998 — with the warmest temperatures in thousands of years — was the worst on record. It killed huge amounts of coral all over the world,” Miller points out.

In August 2001, the researchers will return to the reef for what they hope will be a summer free of hurricanes and bleaching.

“You can’t get discouraged,” Szmant says. “Some things — especially Mother Nature — are beyond our control.”

“We already have three batches — the first major effort to culture them with more to come,” Capo reports. “It’s a spectacular sight.”

By late March, they ranged from extensive larval to benthic juvenile stages, and would require another six months before they would be ready to be introduced into the coral reef environment — just before a new batch of cultured coral larvae would be ready for release.

Capo is keeping a detailed account of every stage, noting optimal water temperatures and salinity. During the grow-out stage, he’ll be interested in the food of choice for the urchin — brown, red or green algae.

“There is no literature to rely on for any of this, so we’re trying a varied menu to see what works best,” he says.

“We’re heading for a couple of very interesting months. After all, studying the interaction of sea urchin and coral opens up brand new avenues of research,” Capo reflects.

The researchers will take a cautious approach to releasing both the urchins and the coral larvae into the reef habitat.

At first, they will evaluate the types of habitats that allow urchins to escape predation. By late spring, Miller and Szmant will have conducted more extensive transplant experiments, stocking urchins in certain experimental sites to see what effect they have on each benthic community.

“Hopefully the weather and the corals will cooperate this August, and we will be able to raise and seed the coral larvae in these urchin-enhanced sites, as well as control sites, to see if the juvenile coral survival improves,” Miller says.

The ultimate measure for success of the project, Szmant, Miller and Capo agree, will come in June 2002 with baby star and elkhorn corals surviving and growing on urchin-enhanced sites in the sanctuary.

“If this two-step approach has the beneficial effects in the sanctuary we think it will, it could change the face of Caribbean reefs in general,” Miller says.

No one will be ready to celebrate success more than Billy Causey, superintendent of the Florida Keys National Marine Sanctuary.

Coral colonies grow slowly, building in stages over millennia. Yet, in just a few recent decades, the cumulative effects of natural and human activities have taken their toll on corals around the world.

In the sanctuary, he has seen tens of thousands of fish die during what he calls “warm water events” marked by doldrum conditions — no movement, no oxygen.

Damaging ocean storms, the loss of sea urchins and serious coral disease outbreaks have been devastating to corals.

On top of that, overfishing of coral reef fish for food and for the aquarium industry altered the ecological balance of reef systems, adds Brian Keller, sanctuary research coordinator.

In other parts of the world, some fishers are using dynamite to drive rare fish out of the nooks and crannies of coral reefs. Others are using poisonous gas to stun and take rare specimens alive. The corals don’t fare as well, Keller says.

The dumping of untreated stormwater, runoff of sediment, and leeching from thousands of septic tanks into near-shore waters of the Florida Keys are exacting their toll on water quality.

A coral reef, he says, is a one of a kind marine resource with huge environmental, ecological and economic implications. Many world leaders are aware of the importance of coral reef management — it’s an issue that crosses political and geographic boundaries.

“My theory — I call it the Billy Causey theory — is that marine life is fairly resilient, given good water quality, good management practices, good habitat. It’s a three-legged stool. Without all three, the stool will tip over,” he says.

Given the importance of coral reefs habitat, Szmant and her research colleagues are hopeful that their research project will emerge as an effective coral reef management tool.

“We’re humble enough to know that this is a small effort. But we are determined to plug away at things that can help even in small ways,” Szmant says.

As for Causey, he promises to be there when the researchers release the sea urchins and the cultured coral larvae into the sanctuary reef.

“It’s exciting,” he says. “Plus, it’s my job to see that best methods and the best science are used to help restore the reef.

Alina’s project is the best of both.”

This article was published in the Early Summer 2001 issue of Coastwatch.