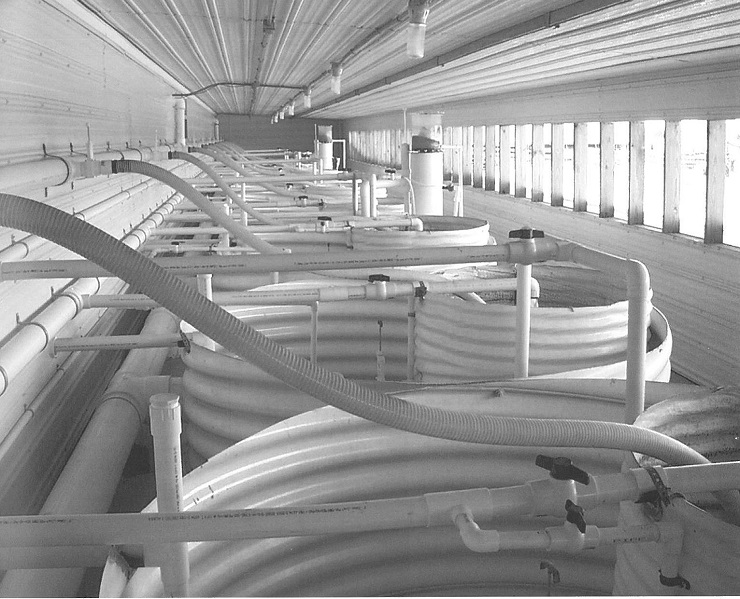 The Southern Farm Tilapia operation includes an extensive tank system. Other facilities include a hatchery and processing plant. Photo by Rebecca Dunning.

Just ask Hunter Clark of Vanguard Farms. Although his family traditionally had raised hogs, he started farming fish with a hybrid striped bass operation a few years back.

After two successful years, he doubled the aquaculture acreage and expanded into yellow perch. Clark also added an ice machine and tanks to grade and hold fish for live sales that draw premium prices.

“The face of North Carolina agriculture is changing,” says Tom Ellis, who heads the aquaculture efforts in the N.C. Department of Agricultme and Consumer Services.

“The tobacco program is changing annually, and we’ve seen historically low prices for com, soybeans and small grains. Some of these farmers — and others involved in livestock and poultry — are looking to diversify to establish a stronger economic base,” Ellis adds.

At the same time, a combined effort — research by Sea Grant scientists, demonstrations by the N.C. Cooperative Extension Service and marketing efforts by state agriculture officials — has expanded the state’s aquaculture operation with new species and new technology. 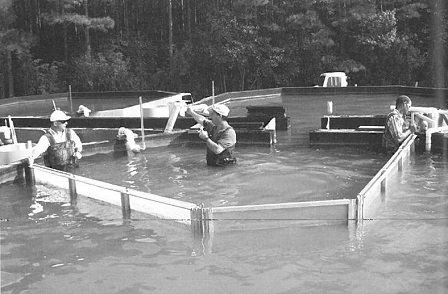 Overall, North Carolina’s foodfish aquaculture operations totaled nearly $17 million in 1999, including shellfish and hybrid striped ba5s operation in coastal areas and trout farms in the mountains. In addition, hatchery operations, which produce the young fish that are sold to the fish farmers, were worth nearly $1.5 million in 1999.

A major aquaculture industry in coastal counties is hybrid striped bass. In 1999, 23 producers had 600 acres of ponds that produced 1.8 million pounds offish worth $4.5 million.

Sea Grant research and demonstration projects in the 1980s showed commercial operations could be profitable. After a period of rapid growth through the 1990s, the number of hybrid striped bass producers has stabilized, but their acreage continues to expand, says Ron Hodson, North Carolina Sea Grant director and past president of the Hybrid Striped Bass Growers Association.

“The role of state agriculture officials has been crucial in the maturation of the industry,” Hodson adds.

“Tom developed a streamlined permitting process that is critical for new and expanded aquaculture operations. Through cooperation from various state agencies, a single request can be routed for approval within the state system,” Hodson says.

And the traditional agricultural community considers aquaculture part of the family. Hodson was one of several aquaculture “pioneers” recently designated as “Ambassadors of Agriculture.” Others honored include even small farms to be quite profitable, explains economist Rebecca Dunning of the state agriculture department As the supply has increased, the price has dropped. In recent years, established farmers have expanded production, yet it has been harder for potential farmers to cover initial overhead — tanks, fingerlings, etc. — with small operations, she adds.

But the lessons learned in hybrid striped bass — from spawning and hatching to water quality and feeding cycles — now are being applied to other, high-value species. Sea Grant researchers expect commercial operations in flounder in just a few years.

Agribusiness leader R.C. Hunt still has plenty of livestock, but his farm operations now include Southern Farm Tilapia. His facilities — a hatchery, grow-out operation and processing plant that includes 4,000-square-feet of freezer space — are located in Franklin, Nash and Wilson counties.

For tilapia, he is building upon the lessons — both positive and negative — learned in the pork industry. His fish farm runs the gamut, from spawning through delivery to retail stores and restaurants, thus eliminating steps that many commodities take before reaching the consumer. “With tilapia, we can break that chain to several links,” Hunt says.

He expects to process up to 1 million pounds per year by the end of 2001. And he hopes to sell young fish from his hatchery to new tilapia farmers — and to process and market fish from those farms and others. “We made investments to be an anchor development,” in fish Hunt farm development,” Hunt says.

Shellfish operations also have benefited from a combined state effort. Those efforts include FRG research projects by Jim and Bonnie Swartzenberg of J&B Aquafood of Stump Sound. Their business started off as a harvest of wild shellfish, but they soon expanded into mariculture, or growing of cultured oysters in nurseries until they are large enough to be planted in leased shellfish beds.

Sea Grant’s mariculture demonstration facility is a cooperative venture with Carteret Community College in Morehead City. The facility serves as a lab for students and will house Sea Grant demonstrations for culture of clams, oysters, mussels and soft-shell crabs.

Some aquaculture operations have a second economic role — nature-based tourism. Visitors to the Blue Ridge Mountains often stop at farm-raised trout farms to fish in the stocked ponds.

And at the coast, Kevin Midgett of Hatteras finds tourists clammor to be clammers. The “u-pick-it” portion of his shellfish operation has become his most profitable.