MENHADEN RESEARCH: ECHOES OF A FISHERY 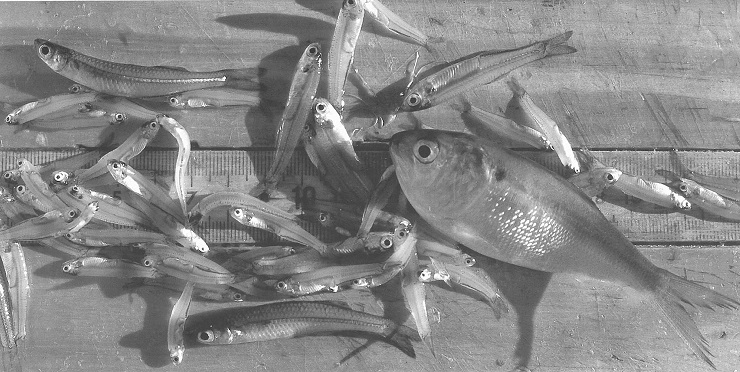 As several seagulls flutter over the boat, Taylor drops a brown metal cylinder, similar to a fish finder, deep into the water.

Within a fraction of a second, he can pinpoint every school of tiny menhaden and anchovies within 90 feet of the boat. Pings from the cylinder pierce through the water and echo back the exact location in the water column, target size and behavioral information to Taylor’s computer.

This is the first time researchers have used the cylinder — a scientific echosounder based on technology developed by the U.S. Navy during World War II — in a North Carolina estuary to conduct a biological study. 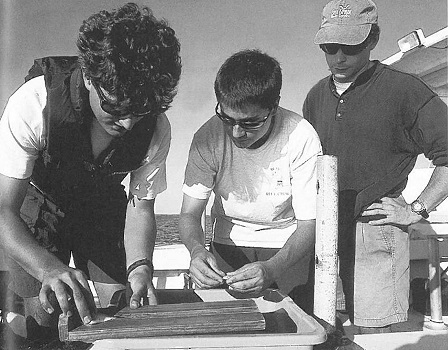 Through monthly sampling of Atlantic menhaden and other pelagic fish that live near the water surface, the NC State scientists hope to model distribution and abundance of pelagic fish that travel between estuaries and the open sea.

“This would provide a way to estimate the number of fish in the estuary,” says Rand. “There is a fisheries management plan for menhaden. Now there is no direct way to measure the density of pelagic fish in the Neuse.”

The National Marine Fisheries Service’s stock assessment of Atlantic menhaden, categorized by regions, is predominantly for fish one year and older.

From 1985 to 1996, North Carolina had the highest median catch of menhaden on the East Coast, according to a 1999 National Oceanic & Atmospheric Administration Technical Report.

“Reproductive success of menhaden has dropped since the late 1980s,” says Mike Street, DMF chief of habitat protection and chairman of the Atlantic Menhaden Advisory Committee for the Atlantic States Marine Fisheries Commission. “We don’t know the environmental reason for the decline, but it is not caused by fishing.”

By tracking the menhaden’s behavior and distribution in the river, Sea Grant scientists hope to unlock some mysteries about the impact of nutrient loading on pelagic fish in estuaries.

“These fish may be happily feeding on plankton in well-oxygenated surface waters until a wind event like an afternoon blow or even a hurricane stirs the water column and upwells anoxic water to the surface,” says Rand. “That could lead to trouble.”

These events can have lethal or sublethal effects on the fish.

Menhaden, which feed on phytoplankton and other minute organic matter, serve as an important link in estuarine food webs by converting plant life to fish biomass. 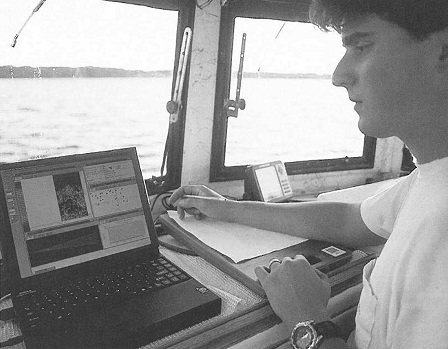 A Sea Grant researcher looks at the location of menhaden in the water column.

“In some well-studied Gulf of Mexico estuaries, it has been estimated that up to 25 percent of primary production in salt marsh communities are exported every year through a mass exodus of fish,” says Rand.

In the fall and winter, menhaden migrate in droves through North Carolina’s barrier island inlets to spawning sites along the continental shelf.

During migration, Atlantic menhaden are caught by ocean-going purse-seine vessels, then processed for fish meal, oil and bait.

“From early in the 20th century until 1995, menhaden was the highest volume fishery in North Carolina,” says Street. “Now it ranks second to blue crabs. We used to have as many as 150 vessels fishing for menhaden in the late 1950s and 1960s along the Atlantic coast. Now we have only about a dozen boats that fish for menhaden, 10 from Virginia and two from Beaufort.”

The number of menhaden reduction plants also has declined along the Atlantic Coast from nine in 1983 to two today — one in Virginia and one in Beaufort, according to Street.

Menhaden and other pelagic fish serve another important role by indirectly supporting several commercial and recreational fisheries. Along the route, the fish are eaten by many predators, including bluefish, striped bass and mackerel, birds and marine mammals.

To determine if low-oxygen levels and other factors affect the growth rates and behavior of pelagic fish, the Sea Grant research team is collecting samples over two years.

The research is tedious and involves long hours on the water at night. Three times a month from May to October, the research team, which includes Taylor, Jacob Rash, Brian Degan and Nathan Hall, motors into the Neuse.

“It’s pretty grueling work,” says Taylor. “By the time we get off the water at sunrise, we are pretty tired.”

The team leaves in two boats — the 18-foot Atlantic and 23-foot Sea Ox — from a dock at Cherry Point Marine Base in Havelock. First, they use water quality sensors to measure the salinity, temperature, dissolved oxygen and pH of the water.

“Water quality sensors have revolutionized the way we assess habitat conditions for fish in the field,” says Rand. “We can moor them on buoys, tow them behind a boat near the bottom or surface, or cast them down to a depth to generate a complete water column profile. We know that other factors such as salinity and temperature also can negatively impact fish.”

The researchers also use plankton traps to measure the abundance of copepods — plankton eaten by anchovies. 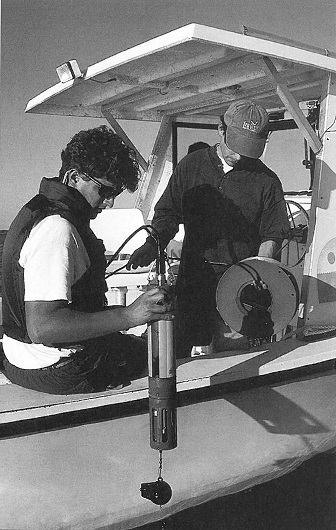 Chris Taylor and Pete Rand use a variety of technology.

“We are trying to draw a link between plankton dynamics and large predators like striped bass, trout and bluefish,” says Taylor. “Menhaden and anchovies — which feed primarily on plankton and also serve as food for large predators — are undoubtedly the important players.”

The scientists also set out the high-tech sonar device at several locations.

To back up the results of the sonar device, they put on white rubber boots and foul-weather gear and set surface trawls in the water between the two boats.

The surface trawl is pulled between the boats and captures fish in the top three feet of the water column.

On this day, Taylor throws out a surface trawl between two boats. After five minutes, he vigorously pulls the trawls in like a veteran fisher.

As he empties the trawl, about a dozen menhaden flutter in the bucket.

This catch is smaller than usual. “Sometimes we pull in twice as many menhaden,” Taylor says. “The anchovy catch is much larger, sometimes as many as 10,000 in a single tow,” he adds.

“Catches of fish in the trawl give us an idea of the composition of species as well as the size distribution of fish,” says Taylor.

Although the data collected in 2000 has not been completely analyzed, it appears that menhaden and other pelagic fish are responding quickly to the river’s water quality, says Taylor.

Rand says the study will provide a link to other models developed by researchers on the Neuse. For example, Sea Grant researcher Larry Crowder is conducting water quality studies on bottom animals with trawl gear.

“The way we conduct research in fisheries is changing rapidly,” says Rand. “We need to be aware of changes occurring throughout the ecosystem — from development patterns in the headwaters and floodplains, to long-term climate patterns, to sources of nutrient loading leading to eutrophication.

“My work on pelagic fishes in the lower Neuse River compliments on-going work by a variety of scientists throughout North Carolina. We just don’t know how the system will respond to the state-mandated reductions in nutrient loading. My hope is that this research will bring us one step closer to the answer.”