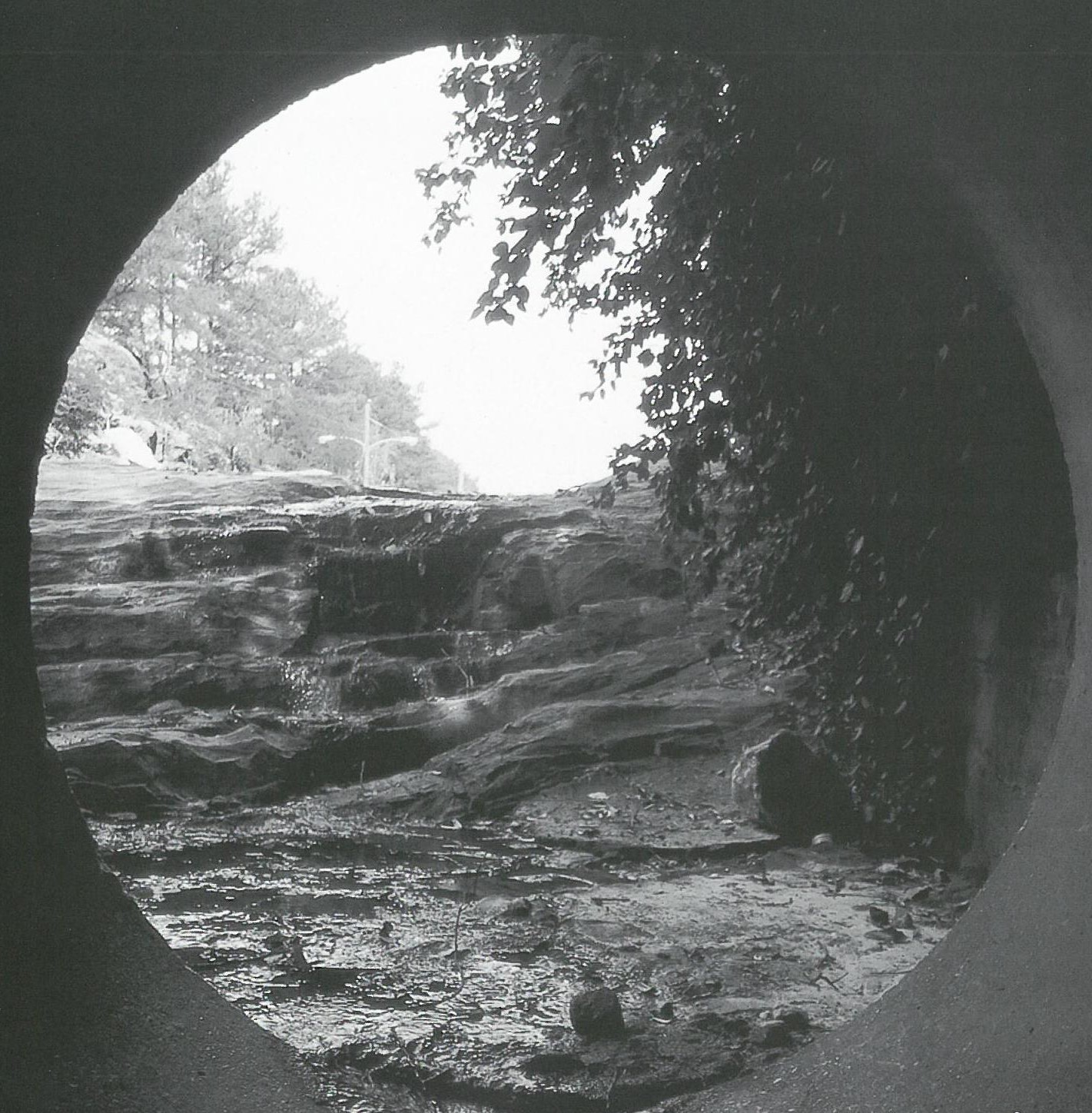 There once was a freshwater stream that bubbled from beneath a forest floor, meandered through towering oaks, and glided across smooth rocks to join forces with a lively, deep creek. The merged waters poured into a swift-flowing river, coursing toward the coastal plain to salty sounds that seeped through narrow inlets into the Atlantic Ocean.

The stream and its banks were teeming with life — fish and wildlife, flowers and trees. It was a delight to local inhabitants, who dubbed it Rocky Branch. Time passed. Deforestation and agriculture began to carve changes into the landscape. A city and a major university slowly crowded out the rural setting. After more than a century, the once pristine waters of Rocky Branch were forced through channels and squeezed into culverts and between buildings. In some places, the stream disappeared beneath roads and parking lots.

Urbanization — and runoff from “hardened” landscape — took a heavy toll on the stream. In 1978, the N.C. Division of Water Quality (DWQ) designated Rocky Branch “the most polluted urban stream in North Carolina” — a dubious distinction with serious environmental implications. Rocky Branch flows more than a mile through the North Carolina State University campus to empty into Walnut Creek, a major tributary of the nutrient-sensitive Neuse River. Sediment from land disturbance and runoff from roads, parking lots and buildings that accompany growth and development are major sources of pollution in much of the Neuse River Basin, where waters flow to the Pamlico Sound.

In the late 1980s the N.C. Department of Environment and Natural Resources developed a water quality management plan that focuses on each of the state’s 17 river basins. With DWQ guidance, comprehensive management plans are developed for each river basin every five years.

A river basin encompasses all the land that water flows through on its way to the river, and on to the estuaries and ocean, Doll says. Within each basin lie thousands of smaller watersheds, that is, areas of land draining into smaller streams or lakes. All water runs to the lowest point, carrying with it “calling cards” — sediment, bacteria, chemicals, nutrients and organic matter — that affect the health of aquatic ecosystems en route to and within the state’s important estuarine fish nurseries.

And, Rocky Branch was a starting point, says Doll.

Restoring urban streams such as Rocky Branch is important to protecting and restoring water quality in North Carolina, according to William Holman, director of the North Carolina Clean Water Management Trust Fund (CWMTF). But such efforts don’t come cheap, he says.

When completed, the pricetag for the three-phase project will exceed $4 million. Along with a grant from CWMTF, funding sources include NC State; a Federal Environmental Protection Agency 319 grant from the N.C. Department of Environment and Natural Resources; Federal Emergency Management Agency; an N.C. Department of Transportation/federal transportation enhancement (TEA 21) grant; and NCDOT stream mitigation funds.

“We have partnered with North Carolina Sea Grant and other agencies because we respect Sea Grant’s expertise. The Rocky Branch project is a great place to show the public how inland streams can be restored and lessen the impact on the Neuse River basin, and ultimately coastal water quality,” Holman says.

A work in progress

The phased project aims to improve water quality, enhance aquatic and wildlife habitats, and transform the stream into a vital part of campus and community life.

“The most compelling reason for this project is the environment,” says Charles Leffler, NC State associate vice chancellor for facilities. “To put it simply, we have developed a comprehensive plan to improve the quality of water flowing downstream into the environmentally sensitive Neuse basin.” 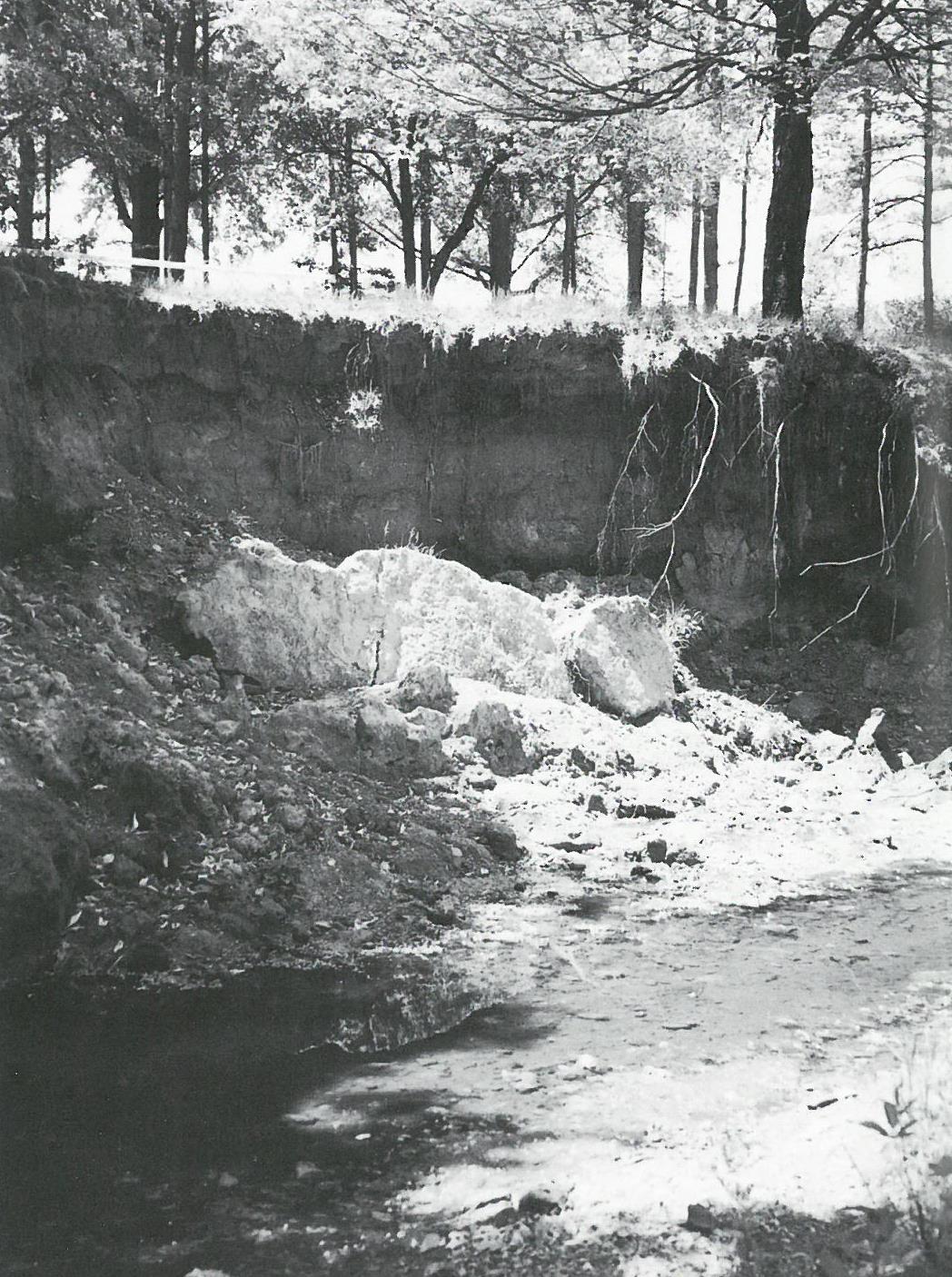 Before: The severely eroded banks of Rocky Branch presented challenging hurdles for the team. Along with a century of man-made disturbances, the stream took a major hit from Hurricane Fran in 1996. Photo by Barbara Doll.

“Rocky Branch is expected to become a national model for urban stream revitalization,” says Ronald G. Hodson, director of North Carolina Sea Grant. “This is consistent with the mission of both Sea Grant and a land grant university — leading the way for the nation in addressing major issues.”

The restoration plan employs “natural channel design” to allow the stream to meander through a newly created floodplain. Native vegetation allows views of the creek while providing habitat, cover and food for wildlife. Natural materials, such as rootwads, willow branches and logs, were chosen for streambank stabilization rather than riprap or other man-made materials.

To get the job done, Doll is collaborating with dozens of people from the university’s Facilities Planning and Design Division, Office of the University Architect, College of Design and N.C. Stream Restoration Institute

No one is ready to rest on the laurels of a well-done Phase I. Phase II, set to begin next spring, will improve an additional 1,500 feet of the stream and environs. Phase III will restore another 1,600-foot stretch in 2004.

With each leg of restored stream goes a new leg of greenway to provide alternative transportation, recreational opportunities and greater access to the stream itself. At certain sites, the paths and stream will duck under busy street intersections for safer walking, biking or jogging within the campus. Ultimately, the Rocky Branch Greenway will join Raleigh’s greenway system, which connects streams and parks throughout the city.

Later, interpretive signs will be installed to explain concepts of natural channel design and identify flora and fauna along the stream and greenway. College of Design students developed the Rocky Branch logo for the signs.

NC State design students have been part of the process from early on. In 1999, students in a landscape architecture design studio built a 30-foot model to illustrate the Rocky Branch stream/greenway design vision to prospective funding agencies. It also served as a conceptual model for the project.

It was important to minimize campus disruption and to maximize the funding resources. Once, Doll and Coleman spotted a rock spoil pile left over from a major construction project. It was exactly the kind of material needed for Rocky Branch. They struck a deal with the developer — and tons of rocks were theirs for the hauling. 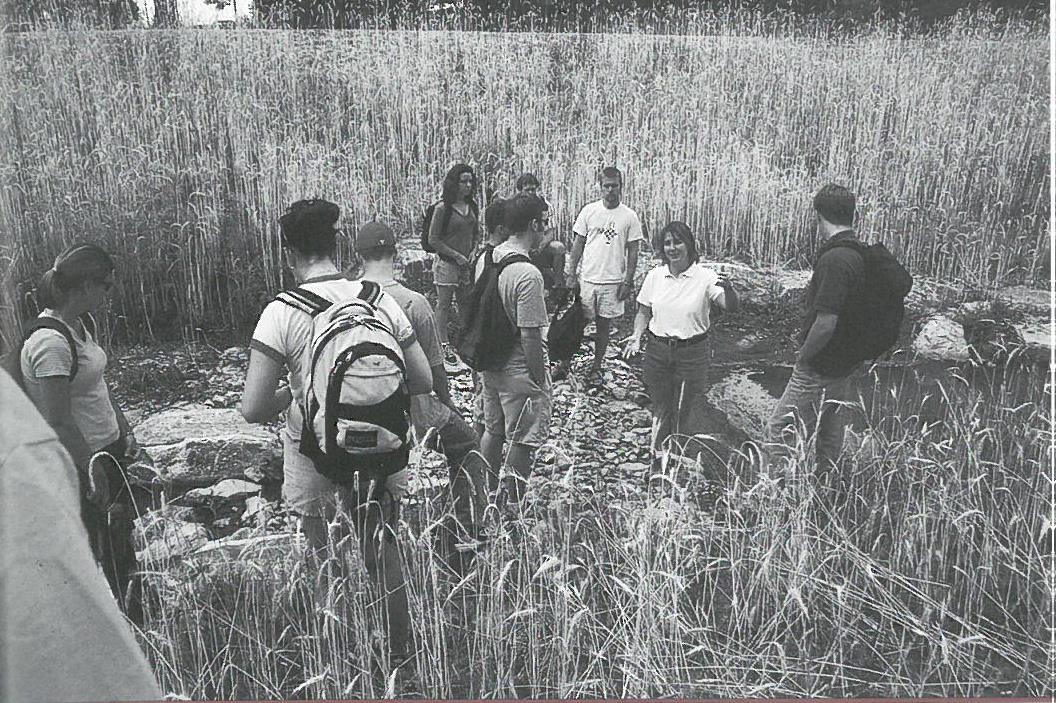 After: Barbara Doll, second from right, stands in the restored floodplain along the same stretch of Rocky Branch shown in the photo above. Photo by Sheri Thomas.

The rocks would be used for a complex piece of engineering in the first phase — reworking the 16 culverts responsible for dumping storm water into Rocky Branch from a nearby urban thoroughfare and impervious surfaces throughout the watershed.

In any storm event, the force of the water would scour the streambed, destabilize the banks, and push huge amounts of sediment downstream. Over time, the eroded stream banks could not provide support for concrete culverts, which collapsed and fell into the stream bed. Hurricane Fran, in 1996, further eroded Rocky Branch, leaving behind more collapsed stormwater pipes, felled trees and exposed tree roots.

In spite of the cumulative harsh blows, there were signs that Rocky Branch was trying to repair itself. “It was fighting back, trying to meander; trying to re-establish its floodplain with vegetation, riffles and pools. Without help, it might have taken 20 to 25 years to heal itself. But in the meantime, huge volumes of sediment would have been dumped downstream,” Doll says.

Education is an important aspect of the Rocky Branch restoration project, Doll points out. “Other than a few students and faculty, many on campus are not aware of the existence of Rocky Branch. Others refer to it as a “ditch.” Long before we broke ground for the restoration, we began a campaign to encourage the use of Rocky Branch as an educational asset,” she says. Student volunteers stenciled “Keep Clean” messages on more than 80 drains throughout the campus. 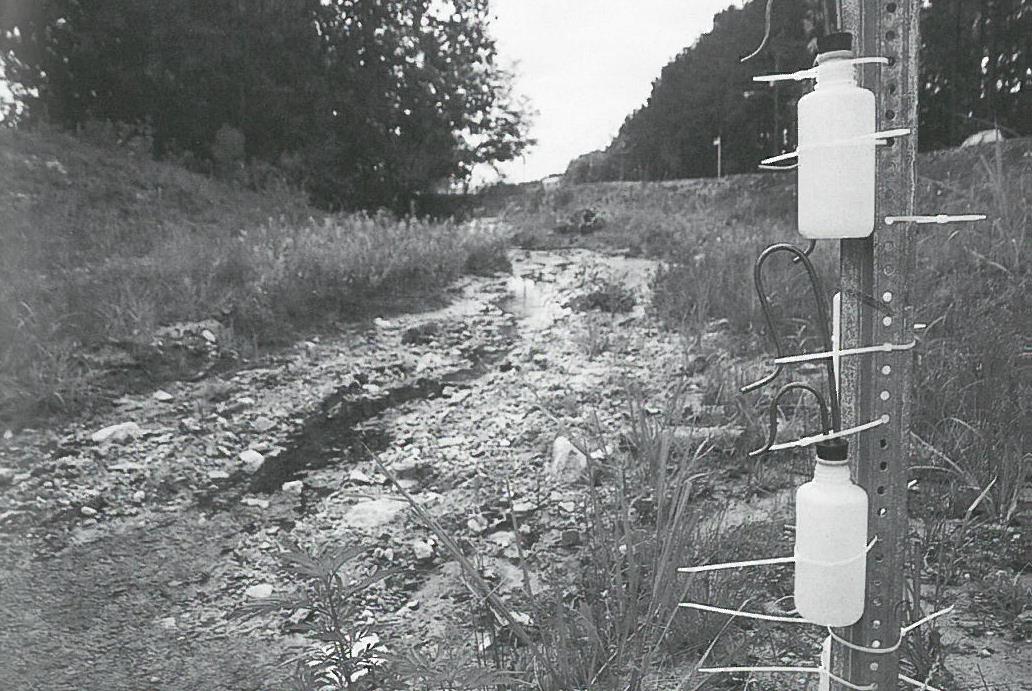 Through the leadership of Sam Mozley, professor of zoology, students in his laboratory class and the Lorax Environmental Club have monitored the aquatic inhabitants in the stream for nearly a decade. And, Tom Drake, professor of marine earth and atmospheric science, uses Rocky Branch for his geomorphology class exercises.

Doll frequently leads field walks for students in zoology, botany and wildlife studies. In addition, Rocky Branch is a demonstration site for the university’s N.C. Stream Restoration Institute, an outreach program to professionals in public works, resource management and private consulting positions from across the state.

Andrew Burg, who heads up the Mecklenburg County Stormwater Services Department, is among the “students” who have witnessed the transformation of this outdoor laboratory.

Like Doll, Burg is involved in the formidable task of breathing new life into abused inland streams. He expects the nearly completed Little Sugar Creek Restoration and Greenway Project in Charlotte’s Freedom Park to have a cumulative positive impact on the Catawba River, which flows across the South Carolina border en route to coastal waters. The project addresses stream and wetland restoration and stormwater management issues and is funded in-part by the North Carolina Wetland Restoration Program. It is the first in a series of projects in the Little Sugar watershed, including one funded by the CWMTF and one funded by the U.S. Army Corps of Engineers.

And, like Rocky Branch in Raleigh, Little Sugar Creek provides a “teachable moment” to convey the benefits of basinwide water quality management to public and elected officials in the greater Charlotte area.

“If we can nip the problem at the source, we can prevent problems downstream. My job is to identify and fix past mistakes,” he says. “It’s also to try to educate the public and elected officials about protecting water quality. If we continue to just fix mistakes, we’ll never get ahead of the water quality issue.”

Enlightened citizens and officials must be involved in self-regulation, he says. For example, policies recently adopted by Mecklenburg County, Charlotte and many surrounding municipalities prohibit building in flood plains, require stream buffers from 25 to 100 feet, and require that developers leave at least 10 percent tree cover on building sites.

Prevention, Doll and Burg know, is much more cost-effective than finding ways and means to undo mistakes.

Meanwhile, Doll and Burg both continue to spread the water quality gospel and to plug away at breathing new life into failing urban streams.

“It’s exciting to see the Rocky Branch recovery process beginning to take place,” Doll says. “It may take some time to get back its full aesthetic value, but there will be no more banks falling in, no more sediment being carried away. Most importantly, the restoration of Rocky Branch is beginning to make a substantial difference to Walnut Creek and ultimately, the Neuse.”

EarthTech of Raleigh developed the working design plan for Phase I, and Tri State Consultants of Greensboro was selected as the contractor. Bids will be let for the next phase in 2003.

This article was published in the Autumn 2002 issue of Coastwatch.