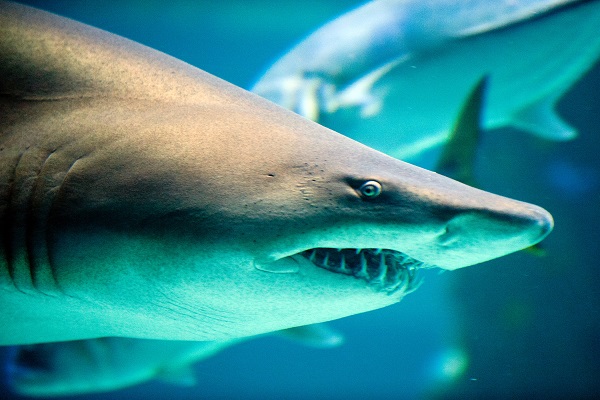 While surfing the rough waters on the Outer Banks during the past 13 years, Mike Remige has seen fewer than a half dozen sharks.

To avoid a vicious bite by a shark, Remige avoids surfing areas where birds are feeding on bait fish.

“The noise from that type of feeding activity may attract sharks,” says Remige, an aquarist at the N.C. Aquarium on Roanoke Island.

Many experts agree that by taking certain precautions, swimmers and surfers can avoid shark attacks.

“A shark attack is a potential danger that must be acknowledged by anyone that frequents marine waters, but it should be kept in perspective,” explains George Burgess, director of the International Shark Attack File (ISAF) in Florida. “Bees, wasps and snakes are responsible for more fatalities each year. In the United States, the annual risk of death from lightning is 30 times greater than from a shark attack.”

Although the odds of a shark bite are low, a series of shark attacks last year in U.S. waters created fear among beachgoers.

The attacks, including one on the Outer Banks last fall, generated intense media coverage that created the perception that 2001 was a banner year for shark attacks.

However, Burgess says that data indicate that attack numbers for the United States were almost identical to those of the previous year — 54 in 2000 and 55 in 2001. The international total of 76 in 2001 was 11 percent lower than in 2000, when there were 85 attacks. More importantly, the number of serious attacks, as measured by the fatality rate, was less than half of that over the last decade, says Burgess, a Florida Sea Grant researcher.

“The number of shark attacks has been rising throughout the past century as a result of human population growth and concurrent rises in aquatic recreation,” says Burgess. “Greater efficiency in ISAF recording in recent years also has contributed to rises in recorded attack totals.”

Shark attacks also have been interlinked with fishery management and conservation efforts. In 1993, NOAA Fisheries implemented a fishery management plan for sharks, which set shark harvest limits in commercial and recreational fisheries. The plan also included data collection programs, permitting and reporting requirements, bycatch reduction of sharks in all fisheries, and promoting sea safety for shark fishers. The measures apply to sharks in the Atlantic Ocean, Gulf of Mexico and the Caribbean Sea.

“The East Coast shark population is not in recovery, based on NOAA Fisheries 1998 assessment,” according to Margo Schulze-Haugen, fishery biologist in the Highly Migratory Species Management Division of NOAA Fisheries headquarters. “The measures put into effect will require 30 to 40 years to rebuild large coastal shark species.”

Because of severe biological limitations, shark populations grow slowly and reproduce at low rates, according to Robert E. Hueter, director of the Center for Shark Research at Mote Marine Laboratory in Sarasota, Fla.

Sharks do not spawn thousands or millions of eggs like bony fish cousins. When they reach adulthood — which may take a dozen years or more in some species — sharks mate just like mammals, and the females get pregnant and carry their growing young inside them.

“So in many ways, sharks reproduce more like ourselves than the other fishes,” says Hueter. “And unlike other fishes, sharks cannot produce lots of young quickly to replenish an area depleted by overfishing. When sharks are overfished, the stocks can remain in a depleted state for decades after fishing has ceased, simply because it takes that long for these animals to grow and produce a new generation.”

Sharks, which are “top predators,” play an important role in the ocean and are typically at the top of marine food webs.

“This ecological role of sharks in the oceans is very important, similar to that of the big predators on land,” says Hueter, past president of the American Elasmobranch Society. “As top predators, sharks affect all the levels below them, and there are few other species that can take their place if sharks are removed.”

More than 400 different species of sharks inhabit the world’s oceans.

In North Carolina, more than 50 species are known to swim in estuaries and ocean waters, according to Sharks, Sawfish, Skates and Rays of the Carolinas by Frank J. Schwartz, a University of North Carolina Institute for Marine Sciences researcher. However, only a few of these species are dangerous for swimmers, surfers and divers.

Along the North Carolina beaches and across the East Coast, the number one species for biting is the blacktip shark (Carcharhinus limbatus), which has black tips on its pectoral fins and grows to no more than about six feet.

Other species that bite include the spinner shark (Carcharhinus brevipinna) — also known for its black-tipped fins and recognized by its long snout.

Smaller species that swim close to shore are the blacknose shark (Carcharhinus acronotus), which has a black/dusky smudge on the top of its snout, and the Atlantic sharpnose shark (Rhizoprionodon terraenovae), distinguished by its long, thin shape and sometimes whitish spots on its body.

The most dangerous shark in surf areas along the southeastern coast is the bull shark (Carcharhinus leucas), which is recognized by its short, broadly round snout, small eyes and subtriangular serrated teeth. This species grows up to nine feet long and feeds on large prey.

“Bull sharks come into estuaries and fresh water,” says Hueter. The bull shark was responsible for the attack last July of an 8-year-old a few feet from the shore in the waters off Pensacola, Fla.

Where do most shark attacks occur? Usually, in nearshore waters, typically inshore of a sandbar or between sandbars, where sharks feed and can become trapped at low tide. Areas with steep dropoffs also are likely attack sites. Sharks congregate there because their natural food items also congregate in the area.

The most common type of shark attack is a “hit and run” in the surf zone with swimmers and surfers as the normal target. The victim seldom sees the attacker, and the shark does not return after inflicting a single bite or slash wound.

“Bump and bite” attacks and “sneak” attacks, while less common, result in greater injuries and most fatalities. These types of attacks usually involve divers or swimmers in somewhat deeper waters, but also occur inshore in some areas of the world. “Bump and bite” attacks are characterized by the shark initially circling and often bumping the victim prior to the actual attack. “Sneak” attacks differ in having the attack occur without warning.

In the United States, two-thirds of the attacks occur in Florida’s Volusia County, which includes Daytona and New Smyrna beaches, according to the ISAF.

“The large number of incidents is attributable to very high aquatic recreational utilization of its attractive waters by Florida residents and tourists, especially surfers,” says Burgess, director of the Florida Program for Shark Research at the University of Florida.

Last year, one swimmer was killed and another injured at Avon on the North Carolina Outer Banks. From 1991 to 2001, there were 13 unprovoked shark attacks in North Carolina waters, including the one fatality, according to the ISAF.

Although the relative risk of shark attacks for humans is very small, swimmers and surfers can help prevent attacks by remembering Hueter’s simple slogan: “Between the months of five through nine, go swimming in the ocean from nine to five.”

In other words, from May through September, swimmers and surfers in the southeast can minimize their risk by waiting until well after dawn (after 9 a.m.) to enter the water and getting out well before sundown (by 5 p.m.).

Large sharks are more active during twilight periods and at night when they have less visual information to go on.

How to Avoid Shark Attacks

For more information about sharks, visit the ISAF Web site:www.flmnh.ufl.edu/fish/Sharks/ISAF/ISAF.htm.

This article was published in the High Season 2002 issue of Coastwatch.