While his colleagues were seeking new ways to prepare and serve sturgeon, Chuck Weirich, North Carolina Sea Grant marine aquaculture specialist, was looking to the past.

The fish used to be plentiful in North Carolina’s waterways, and a common sight at meals. However, many North Carolinians are no longer familiar with eating sturgeon, now listed as an endangered species. 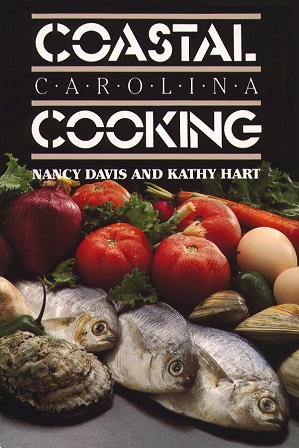 Below is a sturgeon stew recipe from Coastal Carolina Cooking by Nancy Davis and Kathy Hart, a University of North Carolina Press publication. Find out more at uncpress. unc.edu/books/T-877.html.

“The fish is firm and it held up nicely in the stew. I thought the potatoes might cook away since it had to simmer for an hour, but they didn’t,” Lewis notes.

Weirich got to step back into the flavors of the past, as requested. “This traditional simple recipe allows the subtle, mild flavor of the sturgeon to shine through,” says Weirich, who previously worked in sturgeon aquaculture, making him a connoisseur of sorts.

Lewis shared the rest with colleagues, an informal tasting panel. It is clear from their comments that Lewis works with seasoned — pun intended — food tasters, who know the buzzwords to use to describe what they have eaten.

One person noted that the stew was a delicious version of a clear, broth-based seafood chowder, adding that “the sturgeon meat had a wonderful flavor and texture.”

Another praised the pleasing aroma, and that “the overall appearance made it a must for tasting.”

Try this recipe for yourself. See Ordering Sturgeon, on page 25 of the magazine or below in this article, for tips on getting fresh sturgeon meat.

As for me, I didn’t get to taste any of the stew. Lewis was unable to mail a bowl to Raleigh from Morehead City so I just have to depend on the opinions of others — for now. 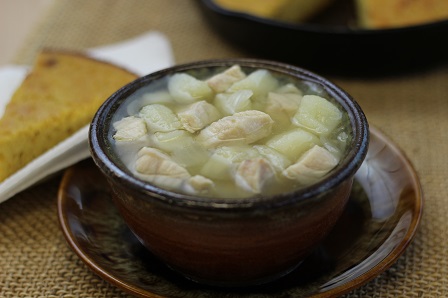 Place sturgeon, potatoes, and onions in a large saucepan. Add water. Season with salt, pepper, and ham drippings. Bring to a boil, reduce heat, and simmer for 1 hour. Serves 4.

From Coastal Carolina Cooking by Nancy Davis and Kathy Hart. Copyright © 1986 by the University of North Carolina Press. Used by permission of the publisher.

Currently, Atlantic Caviar & Sturgeon Company, which grows Russian sturgeon, is the only producer of cultured sturgeon in the state. Go to www.atlanticcaviarandsturgeon.com to order fresh or frozen sturgeon meat, including smoked sturgeon.

Jeff Hinshaw, a North Carolina Cooperative Extension aquaculture specialist who helped in the development of Atlantic, notes that consumers might be able to order the meat from stores and websites that currently sell the company’s caviar.

Customers can approach Whole Foods, Southern Foods, Southern Season and the Hickory Wine Shoppe to order in person, he says. Also, interested cooks can order online from seafoods.com or CaviarStar.com.

Locals Seafood, based in Raleigh, has offered sturgeon products, including fillets, but demand was low. “We sold fresh meat for a few weeks a few years ago,” says co-owner Lin Peterson. He adds that he will place special orders for Triangle consumers seeking sturgeon meat.