Jack Horan of Charlotte is the retired outdoors editor of The Charlotte Observer. He most recently wrote about the annual oyster roast in Varnamtown in Brunswick County for Coastwatch.

Though slow growing and late to mature, alligators in North Carolina nonetheless appear to be thriving in the Coastal Plain, according to a recent study by North Carolina State University researchers.

The N.C. Wildlife Resources Commission requested the study to determine if the alligator population in the state could sustain a hunting season.

Moorman briefed the commission’s Habitat, Nongame and Endangered Species Committee in March. “The recent survey revealed that while alligators are plentiful in the southeastern part of the state, any harvest of adult alligators is not sustainable,” the committee noted in its minutes. 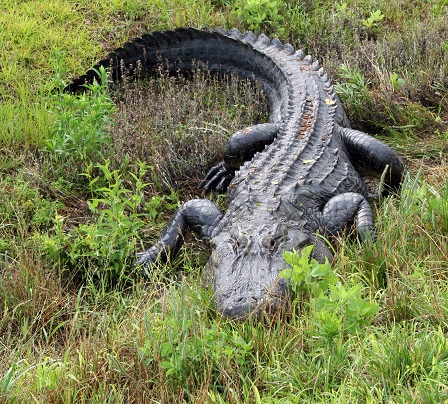 A recent North Carolina State University population survey of alligators indicates that the reptiles appear to be thriving in the state. This 12-foot long, 700-plus-pound alligator was photographed in Cumberland County in 2013. Photo courtesy NC Wildlife Resources Commission.

This census shows alligator numbers either have remained stable or increased, with the greatest densities in the southeastern part of the state.

The researchers termed distribution as patchy, with clusters of gators found in decreasing numbers from South Carolina toward Virginia state lines. One of North Carolina’s northernmost colonies lives in Alligator River National Wildlife Refuge in Dare and Hyde counties. No statewide estimate was made.

It’s against the law to shoot, harass or feed alligators in this state. Gators remain fully protected in North Carolina, unlike those in eight states from South Carolina to Arkansas and Texas, which allow hunting.

The researchers concluded that the gators, which are at the northern end of their range in this state, could be vulnerable to hunting. That’s because females don’t reproduce until they are 18 to 20 years old, or perhaps older. That compares to 10 years for Louisiana gators. Thus, removing females from the population could drive overall numbers down.

Hunters would end up taking both males and females since the sexes look alike. Gators over 10 feet in length are nearly always males, while those shorter than 10 feet can be of either sex.

“Our modeling exercise showed that even low levels of female harvest would cause populations to transition from stable or slightly increasing to a state of decline,” the NC State scientists concluded.

“Alligators in North Carolina may be more vulnerable to environmental stochasicity (randomness), including harsh winters and frequent hurricanes, than elsewhere, so predicting long-term effects of a sustained hunter harvest is especially difficult,” the researchers cautioned.

Wildlife Commission spokesman Geoff Cantrell says the agency has no plans for a hunting season.

The study covered a similar list of lakes, rivers and swamps in 25 counties as a previous survey published in 1986. In 2012 and 2013, researchers cruised waterways at night to determine gator presence, shining a spotlight to reveal their red-eye shine. River and estuary survey routes each were about 10 miles long. Lake routes were 2.5 miles long.

In June 2012, they counted 117 animals on 103 survey routes along 827 miles of shoreline. One year later, the researchers focused on the most productive gator habitat to determine abundance. That later survey found 672 gators on 43 routes, using a statistical model that estimates reptiles that were hidden, along with those actually seen.

Tar Heel gators can get as big as those in other states. In 2014, a vehicle struck and killed a 12-footer at night along U.S. 64 in Dare County in the Alligator River refuge. The gator weighed about 800 pounds, according to an Associated Press article.

The year before, a public safety officer in Jacksonville shot and killed a 12-footer after it attacked an 80-pound Siberian husky walking with its owner next to a creek, the AP reported.