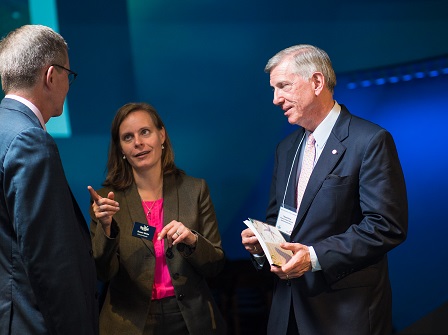 “The day had a broad focus on coastal ecosystems and economies,” explains Susan White, North Carolina Sea Grant executive director. Sea Grant organized the event for the University of North Carolina system. “The success of the event was having such a mix of participants, across the panels and the attendees,” adds Christopher Brown, UNC vice president for research and graduate education. The conference was April 16 at NC State University’s McKimmon Center.

The crowd included: researchers across many disciplines; local, state and federal officials; representatives of community organizations; independent business owners and industry leaders; and others interested in coastal topics.

“We were especially excited to have graduate students there to see the convergence of research results and hot topics, as well as emerging issues. These future leaders gained important perspectives from all the speakers and the networking time,” White notes. 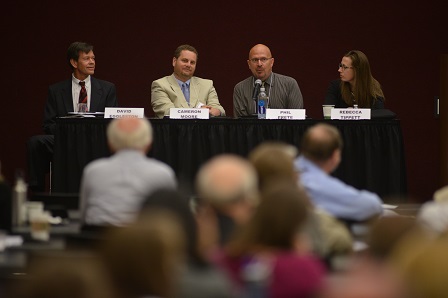 The opening panel included, from left, David Eggleston of NC State University, Cameron Moore of the Cape Fear Home Builders Association, Phil Prete of the City of Wilmington and Rebecca Tippett of the University of North Carolina at Chapel Hill. Photo by Roger Winstead/NC State University.

An opening plenary identified demographic changes in the coastal region, along with examples of challenges and responses from the City of Wilmington as a local government, Cape Fear Home Builders Association as an industry, and the NC State Center for Marine Sciences and Technology as a university research partner. 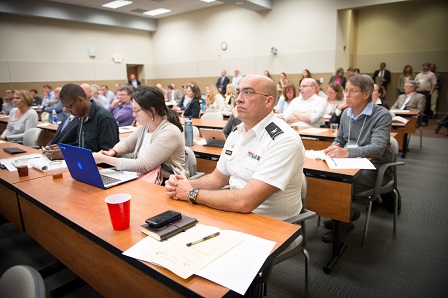 The session on coastal infrastructure drew a full house. Photo by Katy Warner/NCDOT.

Videos, photos and presentations from the day are available online at ncseagrant.ncsu.edu/nc-coastal-conference/.