BUSINESS AS USUAL: Fishing for a Living

Few women in North Carolina set their sights on fishing for a living.

Current statistics show only 5.5 percent of the 5,449 commercial fishing license holders in the state are women. That rate varied little over the past decade, according to the N.C. Division of Marine Fisheries. Anecdotal evidence also indicates that female deck hands, much less captains, are rare.

“But if a woman proves herself not weak of spirit and a quick learner, she will be accepted. I don’t think there’s gender inequality.”

Yet women’s varied roles may not be as visible. Along the North Carolina coast and beyond, women have a tradition of working in the commercial fishing industry — hanging nets, picking crabs, shucking scallops, building pots, selling fish, attending fishery management meetings, and working nets and lines.

“Fishing is often seen as a male activity, but the paid and unpaid labor of women that goes toward sustaining fisheries and fishing communities often is not recognized,” Mirabilio adds.

Some women working in the industry come from generations of fishing families, while others are newcomers. Take some time to meet a few who work the waters for a living.

Shannon Dunn skippers her family’s 32-foot fishing boat from a creek-side berth in Hatteras Village to offshore fishing grounds in search of Spanish mackerel, king mackerel and other fish. 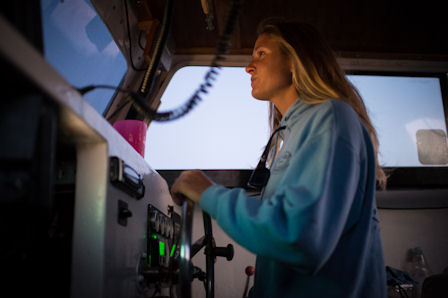 Occasionally a first mate accompanies her. More often than not, she fishes alone.

The 25-year-old is unfazed by her status as the only female captain in the fleet.

“I don’t think about it much,” Dunn says, noting that other captains treat her fairly. They even let her off easy when it comes to the insistent joking and ribbing that is part and parcel of radio chatter among the fleet.

“If I run into a problem I can’t figure out, I’m comfortable asking what to do on the radio and they are always helpful,” the Buxton resident explains.

Dunn says she is confident that she can handle most situations on the water, relying on what she has learned by trial and error, and by listening to advice from more experienced captains. 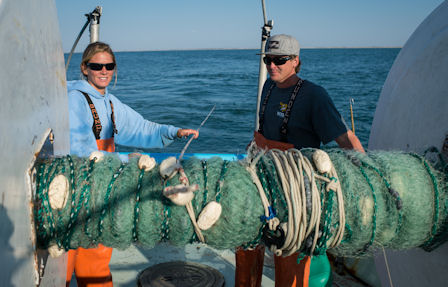 Occasionally a mate accompanies Dunn when she heads to offshore fishing areas. Photo by Daniel Pullen.

Her voice rises in intensity when she talks about confronting new challenges at sea. There was the first time she jumped overboard to pull a rope out of the boat’s wheel. Or the first time she steamed around Diamond Shoals, running into rough seas on the way back to port.

“A freak, random swell came in. I was following another boat through a little cut and there were chest-high waves in front of me, behind me and on both sides. I tried to stay on the back of one wave and could barely see the boat in front of me,” she recalls.

Dunn was 5 years old when she started going with her father to his pound net in Pamlico Sound. The summer after her sophomore year in high school, she gillnetted Spanish mackerel with him on the Shannon D., the boat she now runs, and earned a share of the profit.

“My dad taught me how to fish,” she says.

Her father got his start in commercial fishing shortly after he and her mother sailed into Buxton Harbor from Florida in the 1970s. They had come to surf Cape Hatteras swells. Looking for work to support his surfing habit, he became the first fisherman in his family when he landed a spot on a pound net crew. 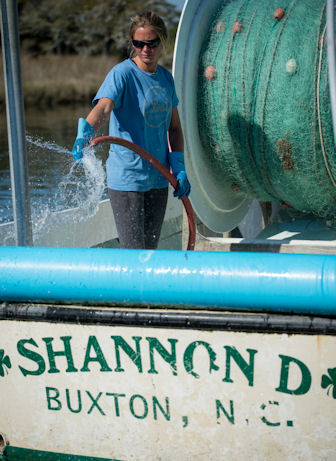 Dunn anticipates buying her namesake boat from her father. Photo by Daniel Pullen.

But a turning point came in 2013. While finishing an internship in Costa Rica, she learned that her father had health problems. She went home to run the family’s boat.

She admits that she had harbored concern that a teaching career might not suit her disposition. “I feel too confined indoors. I’m happier when I’m on the water.”

An avid surfer, Dunn travels to Central America in search of winter waves. Last year she visited El Salvador and Nicaragua on a surf trip with her mother, winner of the United States Surfing Championships women’s division award in 1982.

With confidence in her ability — and in the future — Dunn plans to purchase the Shannon D. from her father. She wants to rebuild the cabin and add bunks to reduce runs back to the island and to lower fuel expenses.

“Buying the boat will probably mean no more surfing vacations,” she says with a smile. “But I’m ready for that commitment.” 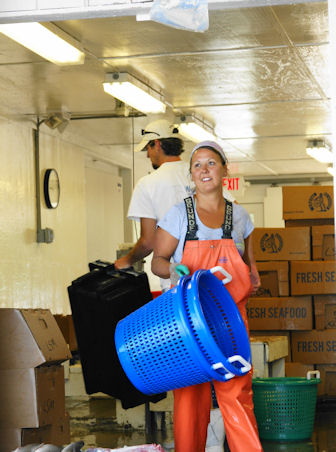 Until Theresa Ray landed a job working pound nets and gill nets with Hardy Plyler on Ocracoke seven years ago, her only fishing experience was with a cane pole in a river while visiting family in Missouri.

“Hardy needed some help, so I asked if he’d give me a chance. I told him I expected him to treat me the same as anyone else he’d hire,” says the 36-year-old who goes by Tree. It is a fitting nickname for a woman who once worked as a timber cruiser in the Allegheny National Forest.

A Winterville native, Ray moved to Ocracoke in 1996, combining work in massage therapy and retail sales. That is, until the urge struck to test her mettle in an outdoor career flush with physical and mental challenges.

“Everything was so new to me. I didn’t even know how to start an engine,” Ray says. It wasn’t until her third year fishing that she began to appreciate the natural nuances that often foretell success on the water.

Ray and Plyler begin their fishing year in the spring, setting gill nets to catch bluefish in Pamlico Sound, and end the year working flounder pound nets into late fall. Winter months are reserved for duck hunting and working on fishing gear. 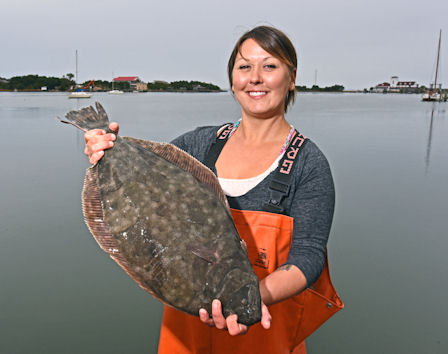 After earlier work in massage therapy and retail, she enjoys the mental and physical challenges of fishing. Photo by Dylan Ray.

Ray admits that stepping into a male-dominated field was intimidating. Another woman on the island harvests clams for the commercial market, but Ray is the only woman fishing nets full time.

“I think the other fishermen had their doubts at first when they saw a ‘hippie chick’ with earrings and bracelets at the fish house,” she says. “But now they know more about me.”

She plans to continue her work, but does worry about the impact future fishing regulations might have on a small fishing village such as Ocracoke.

“Ocracoke Seafood Company is the future of fishing on this island. This is my home,” Ray says, pointing to the fish house’s work floor, where he catch is sorted, processed and packed. “I’m going to do what I can to see that this place continues to thrive.”

• HERITAGE ON THE DOCKS 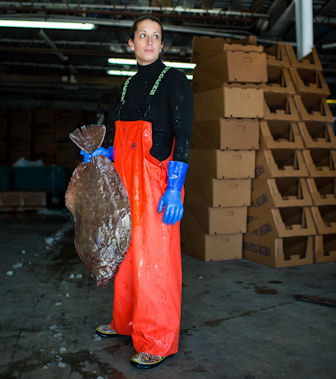 Micah Daniels continues a family tradition at the Wanchese Fish Company in Dare County, a company that spans generations. Photo by Daniel Pullen.

Micah Daniels was a middle-school student when she started heading shrimp and shoveling ice at her family’s fish house in Wanchese to earn spending money.

“My parents believed in instilling a strong work ethic in their children,” Daniels, 31, says. “If you got into trouble, you also went to the fish house to work but you did not get paid.”

On the Outer Banks, the Daniels name is synonymous with seafood. Daniels’ grandfather, Malcolm, bought a small fish-processing plant built by his father-in-law in 1936. That set into play a course of innovation and adaptation that transformed Wanchese Fish Company into one of the largest seafood suppliers in the country.

“My grandfather was a visionary. He had the first dry dock in Wanchese, bought a fish house in Hampton, started running trucks to New York — all to give the business more options,” she explains. The company includes operations in Virginia’s Tidewater region.

She taught school in Rockingham and Guilford counties for six years, returning to Wanchese in the summer to help at her family’s seafood restaurant before moving home to manage it. When the restaurant closed for the winter months, she worked with an uncle on expanding the company’s value-added product lines for groceries and restaurants. 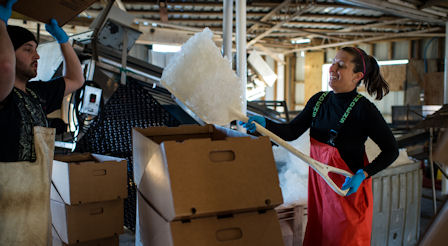 In 2014, Daniels started working full time for Wanchese Fish Company. She manages a marina, helps develop retail sales promotions, and works at the fish house. Last summer she ran the floor at the fish house where shrimp are headed and weighed, overseeing as many as 17 workers on some days and checking that quality and food safety compliance standards were met.

“At first, the fishermen probably thought I wasn’t going to last at the fish house, but over time we developed a mutual respect,” she says.

Daniels cites her familiarity with communications technology and with the value of visual literacy as important qualities she brings to her work. “I’m all about communication. The sooner we can tell a salesman what we have coming in to the fish house, the fresher that product will be when it reaches the consumer,” she says. Daniels also focuses on messages provided to consumers, such as having the U.S. flag on retail products. 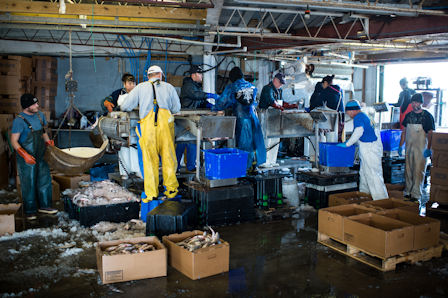 Daniels says there is strong mutual respect within the fish house. Photo by Daniel Pullen.

In keeping with Malcolm Daniels’ visionary spirit, the family business is working with an investment bank to look at myriad business options.

And Micah Daniels also is open to new paths. Last year she obtained her commercial fishing license after documenting her history of working in the industry for the state license eligibility board.

“I don’t have an immediate plan to use it, but it gives me another option. I’m passionate about seafood. This is more than a job. It’s also my heritage,” she says.

Like Dunn and Ray, Daniels rejects the idea that they are charting new territory. Each also shares a steadfast confidence that they can overcome any barriers standing in the way of success.

Ray notes that she often speaks with students visiting the Ocracoke fish house on field trips. Some of the youngsters express surprise when they see her unloading the day’s catch.

“I tell the young girls that they can do this, too,” she says.