MOVING THROUGH THE MARSH 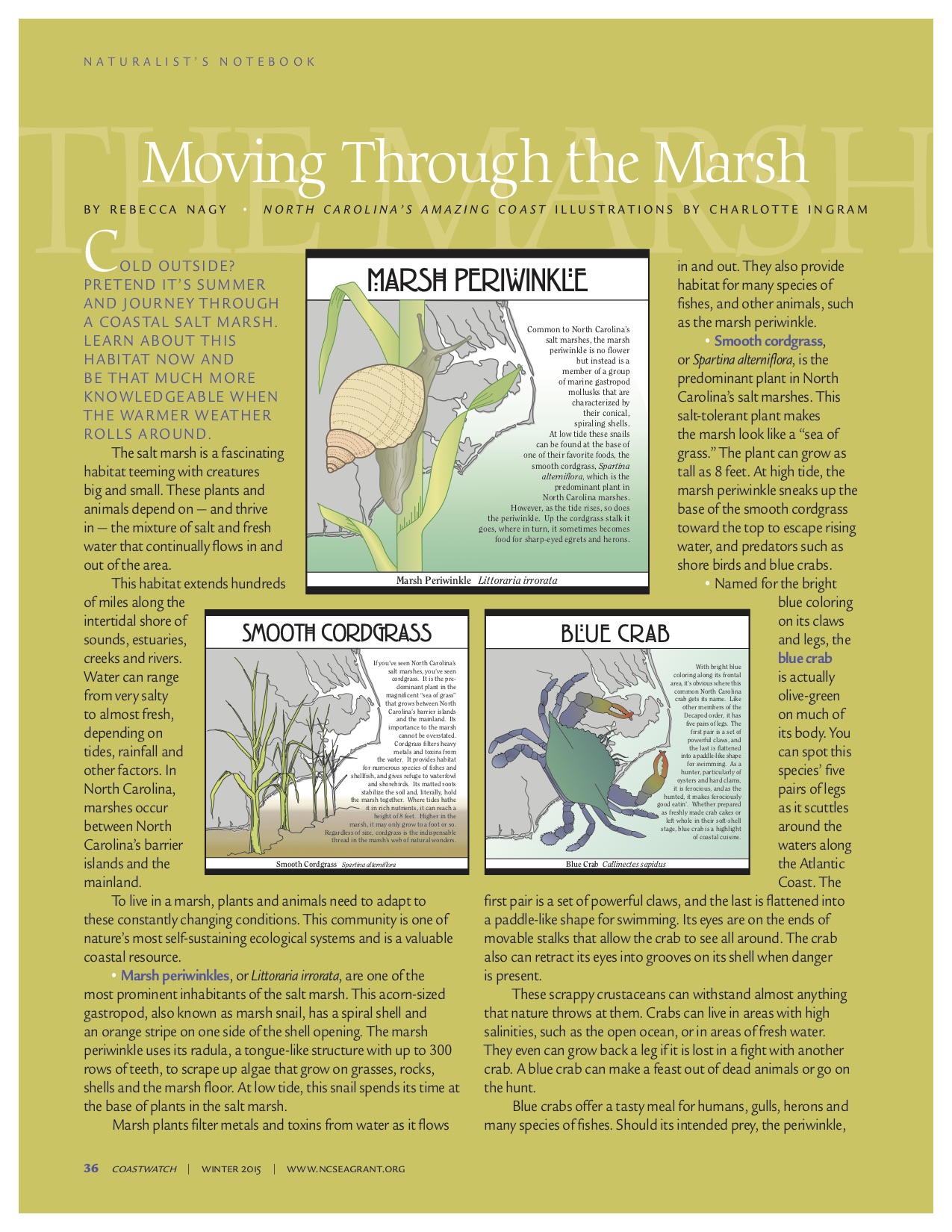 Cold outside? Pretend it’s summer and journey through a coastal salt marsh. Learn about this habitat now and be that much more knowledgeable when the warmer weather rolls around.

The salt marsh is a fascinating habitat teeming with creatures big and small. These plants and animals depend on — and thrive in — the mixture of salt and fresh water that continually flows in and out of the area.

This habitat extends hundreds of miles along the intertidal shore of sounds, estuaries, creeks and rivers. Water can range from very salty to almost fresh, depending on tides, rainfall and other factors. In North Carolina, marshes occur between North Carolina’s barrier islands and the mainland.

To live in a marsh, plants and animals need to adapt to these constantly changing conditions. This community is one of nature’s most self-sustaining ecological systems and is a valuable coastal resource.

• Marsh periwinkles, or Littoraria irrorata, are one of the most prominent inhabitants of the salt marsh. This acorn-sized gastropod, also known as marsh snail, has a spiral shell and an orange stripe on one side of the shell opening. The marsh periwinkle uses its radula, a tongue-like structure with up to 300 rows of teeth, to scrape up algae that grow on grasses, rocks, shells and the marsh floor. At low tide, this snail spends its time at the base of plants in the salt marsh.

Marsh plants filter metals and toxins from water as it flows in and out. They also provide habitat for many species of fishes, and other animals, such as the marsh periwinkle.

• Smooth cordgrass, or Spartina alterniflora, is the predominant plant in North Carolina’s salt marshes. This salt-tolerant plant makes the marsh look like a “sea of grass.” The plant can grow as tall as 8 feet. At high tide, the marsh periwinkle sneaks up the base of the smooth cordgrass toward the top to escape rising water, and predators such as shore birds and blue crabs.

• Named for the bright blue coloring on its claws and legs, the blue crab is actually olive-green on much of its body. You can spot this species’ five pairs of legs as it scuttles around the waters along the Atlantic Coast. The first pair is a set of powerful claws, and the last is flattened into a paddle-like shape for swimming. Its eyes are on the ends of movable stalks that allow the crab to see all around. The crab also can retract its eyes into grooves on its shell when danger is present.

These scrappy crustaceans can withstand almost anything that nature throws at them. Crabs can live in areas with high salinities, such as the open ocean, or in areas of fresh water. They even can grow back a leg if it is lost in a fight with another crab. A blue crab can make a feast out of dead animals or go on the hunt.

Blue crabs offer a tasty meal for humans, gulls, herons and many species of fishes. Should its intended prey, the periwinkle, escape to the tops of the smooth cordgrass, the blue crab can turn its attention to oysters and hard clams in the marsh mud.

• Marsh mud, with its strong odor, plays an important role in this habitat. This thick nutrient soup helps to replenish North Carolina’s coastal waters. Bacteria in the mud break down plant debris — while emitting a sulfurous compound that gives the marsh that certain smell. These bacteria are then eaten by slightly larger species, such as zooplankton. Fishes, shrimp and other creatures then eat the zooplankton.

• The mud also is home to marsh creatures, including fiddler crabs that live in dime-sized holes in the muddy soil that are covered by water at high tide and exposed to the elements at low tide. Their burrows aerate the marsh mud during low tide and act as an irrigation system during high tide. Fiddler crabs make their homes by digging sand and mud out of the ground, forming them into pellets, and depositing them outside of the burrow.

North Carolina has three species of fiddlers — marsh, sand and red-jointed. They can vary in size from three-quarters of an inch to just over one-and-a-half inches.

The male fiddler crab is hard to miss. He has one oversized claw that he often holds in front of his body, like he is playing a violin. This vegetarian feeds on algae in a unique way: it shovels as much sand and mud as it can into its mouth, separates the algae, and spits out everything else.

• Graceful birds, snowy egrets, can be seen wading through water in the marsh. But don’t let that catch you off guard! When prey, such as the fiddler crab, is spotted, the egret begins its hunt.

The bird stirs up marsh mud — and hopefully, prey — with its feet while walking, running and hopping. The egret then swoops its beak to the mud with its long neck and thrusts its head forward, snapping at prey with its beak.

During the late 19th and early 20th centuries, Egretta thula was hunted almost to extinction.

Their long and fluffy plumes were a popular addition to women’s hats. The habitat of the snowy egrets made them easy targets — they nest in large colonies in shrubs a few feet off the ground. The species population has come back due in large part to the Migratory Bird Treaty Act of 1918, one of the United States’ earliest environmental laws.

The snowy egret is easily identified by the coloration of its feet and bill. It has black legs, yellow feet, and a black beak. The great egret has black legs, black feet, and a yellow bill. Snowy egrets nest in large colonies with other long-legged birds, such as egrets, herons and ibises.

Information for this article was gathered from North Carolina’s Amazing Coast: Natural Wonders from Alligators to Zoeas by David Bryant, George Davidson, Terri Kirby Hathaway and Kathleen Angione. It is a partnership among North Carolina and Georgia Sea Grant programs and UGA Press.

• Nature Guide to the Carolina Coast by Peter Meyer

• Life in the Chesapeake Bay by Alice Jane and Robert L. Lippson

Consider a marsh safari or other experience to learn about estuaries. Check opportunities from the N.C. Aquariums (www.ncaquariums.com), and the N.C. Coastal Reserve and National Estuarine Research Reserve (www.nccoastalreserve.net).