NATURALIST’S NOTEBOOK: Running with the Blues 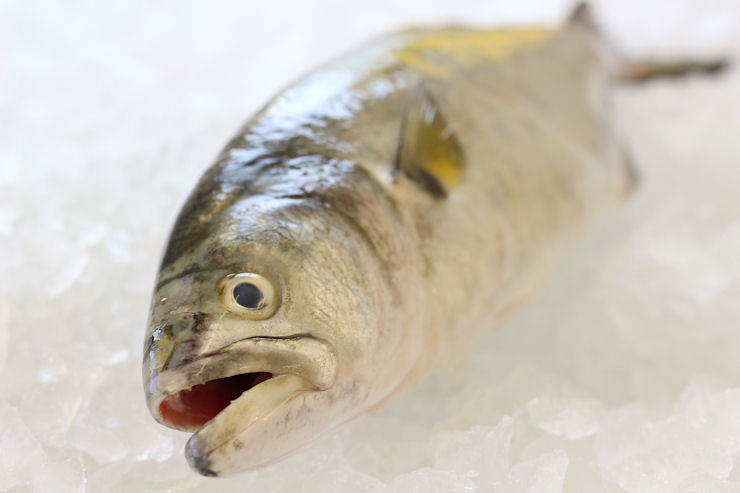 Bluefish, also known as blues, often are the catch of the day. Make that the fresh catch with an island flair.

“Locals get a night out of the kitchen during our busiest time,” says Lynne Foster, who helped launch Hatteras Day at the Docks, another island tradition. “Some of our visitors get a genuine taste of Hatteras for the first time, while others enjoy a highly anticipated annual vacation kick-off or farewell dinner.” 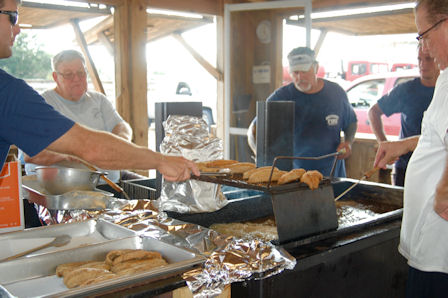 The Hatteras Fish Fry is a popular local tradition that draws crowds eager to taste the freshly caught fish. Photo by Lynne Foster.

Why feature bluefish? They’re a part of local culture — and abundant off the North Carolina coast — notes Mary Ellon Ballance, a fish-fry organizer.

“Because bluefish are so readily available in the summer months, it makes them an economical choice for us. The more money we can make, the more the community benefits. We support commercial fishermen by buying bluefish from them, and then we donate all our profits to charitable organizations in our community,” she adds.

“It really is a win-win for everyone. It’s a must-do event for people passing through on vacation. Many people have been coming to experience the Hatteras Fish Fry for over 30 years.”

Bluefish travel in large groups, or schools. They swim along the Eastern Seaboard from Maine to Florida. Off the North Carolina coast, they can be found in all seasons.

Blues are migratory apex predators. They eat other fish, rather than dining on zooplankton or phytoplankton. In fact, these voracious feeders “eat whatever is most abundant,” explains James Morley, whose master’s and doctoral research at North Carolina State University focused on the fish.

“Their teeth are similar to a great white shark’s, meant for grabbing and ripping relatively large prey in half,” Morley notes. He now studies climate and migration patterns of marine species, including bluefish, as a postdoctoral researcher at Rutgers University.

In North Carolina, they typically eat anchovies, but bluefish are known to take chunks out of many other fish. Morley once found the tail of a stingray in a bluefish’s belly.

The fish can live up to 12 years and may exceed 30 pounds in some places along the East Coast, making the fish popular among anglers seeking a large catch.

The species is readily available on our coast, according to Beth Egbert, a biologist with the N.C. Division of Marine Fisheries who monitors bluefish. “They have a healthy, viable stock, are fun to catch, and as long as you eat them fresh, they’re a very tasty fish,” she says.

Scott Baker, a fisheries specialist for North Carolina Sea Grant, notes that the fish are popular among all fishermen. “Bluefish are among the top 10 fish harvested for both commercial and recreational fisheries — which isn’t common,” he says.

“Bluefish are an important recreational catch, mainly for the thrill of the catch rather than targeted table fare,” Baker adds.

He believes the fish may be underappreciated by those who live farther from the North Carolina coast.

Inland residents may not seek them out in markets or restaurants. “Most consumers dismiss bluefish without trying it,” he says, noting one drawback may be that the fish is very oily.

Bluefish oils are high in omega-3 fatty acids, a key part of a balanced diet. But their fat also gives these fish a unique — and strong — flavor. 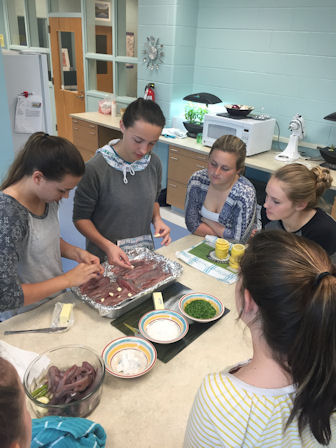 The bluefish found off North Carolina’s coast typically are not large adults because more mature fish move north of Cape Hatteras in the summer, likely following optimal temperatures and food. The aggregation of small fish here can discourage anglers who are aiming for larger catches but may actually benefit those who eat bluefish.

Baker advises moderation in consuming this fish — and all other seafood. “Vary what you eat throughout the week,” he says. So why aren’t more people eating bluefish? Freshness could be a factor, notes Barry Nash, Sea Grant seafood technology and marketing specialist.

“Bluefish can lose its fresh flavor very quickly because of its high levels of unsaturated fat,” he explains. The more exposure to oxygen, the faster the fish degrades, creating a stronger flavor some might find unappealing, he adds.

These tender-fleshed fish are most commonly found at local fish markets February through April, although commercial and recreational seasons are year-round.

“When picking your bluefish and other finfish at a market, look for flesh that is firm, elastic and translucent in color, with a mild scent and moist appearance,” Nash notes.

“Avoid any fish with flesh that is bruised or mushy, is milky colored, or has dry or browned edges,” he adds, noting that more seafood selection tips are available from Sea Grant’s Quality Counts poster. 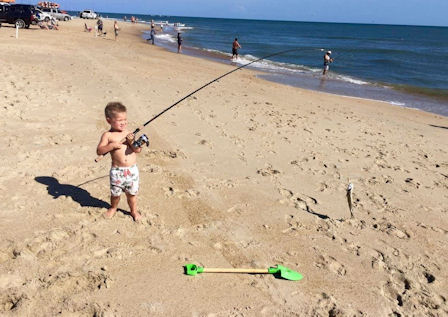 Bodey Perry of Frisco reels in a bluefish the day before his third birthday. Photo courtesy Frisco Rod and Gun.

Mention blues at the North Carolina coast and you are likely to get a story.

Mike Willis, a Harkers Island local, has spent his life surrounded by bluefish. His memories trace back to a childhood spent in his family’s commercial fishing business. “When I was young, I thought fish were gross,” he says, citing the pungent smells from the fish house.

By age 7, though, Willis was out fishing with the rest of his family — and bluefish became one of his favorites. “I like fishing for them because they’re more violent. It makes them more fun to catch.”

“The problem is that people have a preconception of the taste of bluefish before they give it a chance,” Willis notes. “The fish definitely are an acquired taste, but they’re more of a local thing. They’re generally not on most restaurants’ menus, so you have to specifically ask if they have bluefish in.”

On Hatteras Island, you might hear about how, on a late summer’s day, Bodey Perry, just a day shy of his third birthday, caught his first fish by himself. It was a bluefish. His face lit up with joy.

Or there’s the time that Gilliam Shisler, age 7, caught a 14-pounder off Pamlico Sound, and set himself on a path tracing his family’s footsteps. He took his catch to Bodey Perry’s family shop, Frisco Rod and Gun, for an official weigh-in.

“Following his grandfather’s tradition, Gilliam and his father, Jeremy, smoked it and made salad,” Foster recalls.

At all ages, though, these fish make a mark. “Bluefish catches are usually so abundant that the fishermen share their catches, especially with the older folks,” Foster adds. “Many of the older people no longer catch their own, nor have a spouse to catch for them, so they truly appreciate it.” 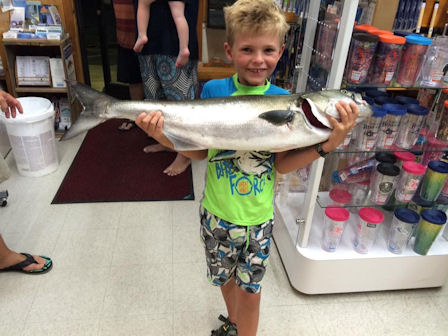 A few miles from Perry’s store, high-school students learned about bluefish through a community project.

Evan Ferguson, the marketing and foods teacher for Cape Hatteras Secondary School, enlisted Amy Gaw, co-founder of Outer Banks SeaSalt, to demonstrate how to prepare a healthy meal with bluefish and other locally sourced products.

Hatteras seafood dealer Jeff Aiken donated a pile of bluefish. Capt. Ernie Foster, Lynne Foster’s husband and the captain of the Albatross fleet, taught the students how to clean and fillet the fresh fish.

“We chose bluefish because it was in season at the time, affordable and underutilized by most home cooks. Because of its darker meat, bluefish gets a bad rap. It’s a very misunderstood fish,” Ferguson explains.

In the kitchen classroom, Ferguson and Gaw showed students an easy way to prepare the fish that did not involve frying. Initially, Ferguson’s students were resistant to the new, healthier method. But Gaw’s recipe won them over.

“Other than fried, students hadn’t had the fish many other ways, so they were apprehensive when they heard we were making bluefish. The students really enjoyed going to the docks to pick up the fish, learning new ways to prepare it and sampling the dish,” Ferguson notes. “Overall, it was a great experience.”

And her students learned that baked bluefish is just as much of a treat as fried bluefish.

Find out more about selecting high-quality seafood and when particular fish might be available at ncseagrant.ncsu.edu/localseafood. For more recipes, visit marinersmenu.org.

Emily White is a North Carolina Sea Grant communications intern. She is a senior at NC State University, majoring in science, technology and society.