LEAVE IT TO BEAVER (DAMS) 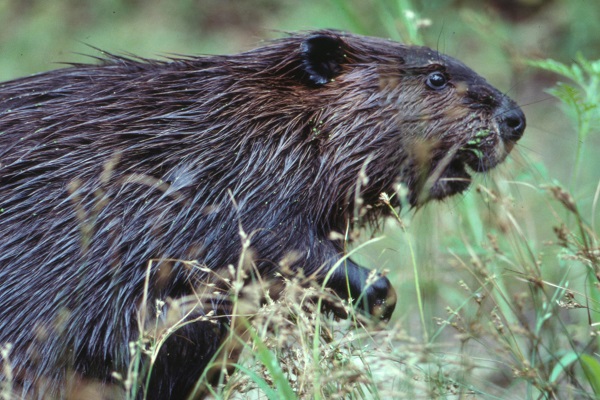 North Carolina Sea Grant researchers are looking to beavers, Castor canadensis, for ideas on how to restore wetlands. Photo by Ken Taylor.

Long, long ago in a wetland not very far away, nature’s architects sculpted the landscape to create places to live and food to eat. North American beavers altered the environment to fit their needs until the needs of humans drove them out of their jobs — and out of their homes.

Now, researchers are resurrecting the beaver’s original plans in hopes of solving issues created as a byproduct of our designs.

Wegmann specializes in understanding how humans have altered the form and function of landscape features. His interest in beavers actually started with studying the sediments at Yates Mill Pond, a historic county park and the oldest intact mill pond in Wake County.

“I came out to test the sediment captured above the mill pond and was really impressed by the beaver wetland complex located behind the dam. I thought ‘this is how streams probably used to look,’ and decided to use the dams as a template,” he recalls.

It wasn’t the beavers themselves Wegmann wanted to emulate but rather their building style. Could an artificial dam mimic the functions of a real one enough to return a stream to its historic flow and function?

Wegmann recruited Adam Lee, a geology graduate student at NC State, to help him with the research. A former Wake Tech Community College student, Lee jumped at the opportunity to investigate how landscapes respond to natural remediation treatments.

“If we can get valley bottoms back to a more historic, beaver-influenced form, we also may be able to improve the riparian environment and water quality,” Lee says of their ultimate goal of influencing stream and ecosystem restoration efforts.

John Fear, deputy director of North Carolina Sea Grant, sees potential benefits for coastal ecosystems, too. “Our river systems flow from the Piedmont to the coastal region, and many of them have nutrient over-enrichment problems. This effort is an attempt to capture nutrients and sediment before they make their way downstream.”

With funding from Sea Grant’s minigrant program, Wegmann and Lee were ready to get building. But first, they needed to take a few lessons from the masters to perfect their technique.

Weighing in at 35 pounds and more, beavers, Castor canadensis, are North America’s largest rodent. These industrious herbivores whittle away at trees with their incredibly strong teeth, felling them to eat the leaves, twigs and inner bark and to stockpile the branches and whole trees for building dams.

Beavers construct their dams on flowing water, causing back ups and creating ponds deep enough for them to swim in. While beavers usually stay away from humans, settlers found it hard to resist their luxurious, dark chestnut-colored fur. By the 1890s, trappers had completely wiped out North Carolina’s beavers.

Ironically, the demand for pelts was a driver for reintroducing beavers to North Carolina in the late 1930s, explains Jessie Birckhead, a wildlife biologist with the N.C. Wildlife Resources Commission. “They originally released just 29 beavers from Pennsylvania into the Sandhills, with a bigger effort to spread them out across the state in the early 1950s.”

Now, she adds, conflicts happen regularly as beavers continue to change how water moves across the landscape, increasingly in areas with costly infrastructure. “Beavers and people probably can’t coexist in every situation, but it’s important to emphasize the value beavers bring to our ecosystems for society and for wildlife.

“Duck hunters and bird watchers, for example, are big champions of beavers because they create tremendous waterfowl habitat.”

This was true at Yates Mill Pond where people visited the beaver-controlled wetlands to view flocks of waterfowl — at least until a storm in 2014 destroyed the dams. The beavers never returned and the wetlands mostly dried out, leaving an ideal area for Wegmann and Lee to construct their own dam prototypes.

Back to Beaver Basics

Prior to any construction, Lee measured different water-quality and landscape parameters at the Yates Mill site to establish a baseline for future analyses. He also conducted similar tests at Blackley Pond, a privately owned, beaver-controlled wetland complex in northeastern Wake County.

“Blackley Pond is a great test site because the dams are so established; they are not temporary,” Wegmann notes. 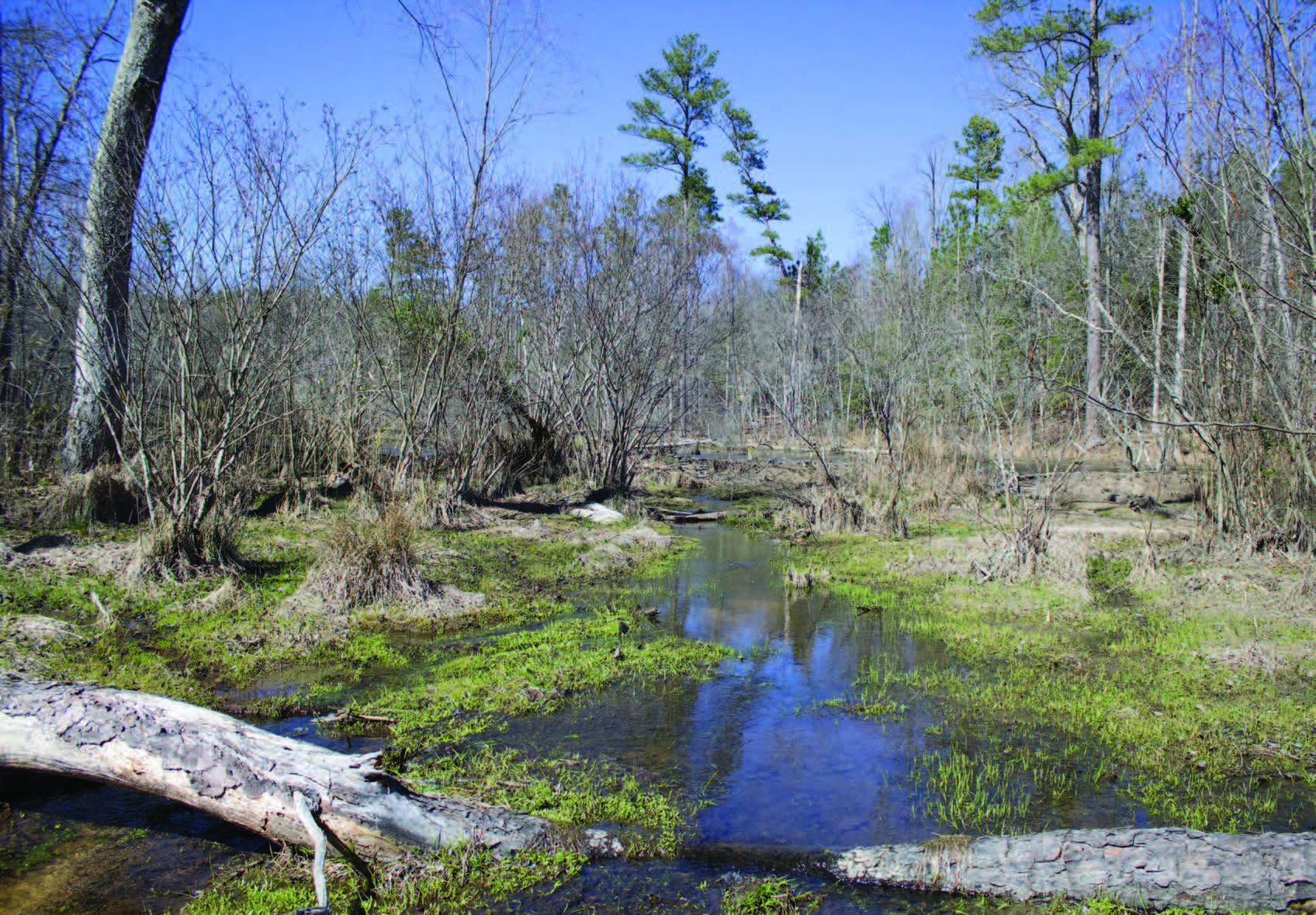 Blackley Pond, which houses several natural beaver dams, is being used as a control site. Photo by Adam Lee.

Some of these measurements are taken from the sky. The researchers regularly fly a briefcase-sized drone along a preset flight path to capture imagery and small changes in elevation at the test site.

Based on research done out west, Lee came up with the design for a beaver dam analog, or BDA. The BDAs use rows of untreated lumber driven into the streambed sediment and interlaced with sticks to slow the flow of water. Wanting to block the flow even more to encourage overbank flooding, they reinforced the BDAs with clay, Lee adds.

After setting up the first three BDAs along Swift Creek as it flows through Yates Mill in January, Lee brought in a few outside experts to evaluate the structures. “I had another graduate student come out to look and she mentioned that the analogs weren’t nearly as thick or deep as real dams,” he shares.

The team continued to tweak the design by adding layers, similar to what beavers would do in the wild. In fact, after several months, a curious beaver decided to take up residence in one of the dams.

“We actually were interested in how the BDAs could jumpstart the process of bringing back beavers so it wasn’t a big problem,” Lee says. Beavers prefer smaller streams with lower banks, making many of the highly incised channels unsuitable.

However, just a week after moving in, the beaver was forced to move out when a large April rainstorm blew out all three BDAs. Lee used this  as an opportunity to take some additional water-quality measurements and reevaluate the project scope.

After deciding to scale down the number of structures to just one, Lee completed construction of the new BDA in June. He had help from Dustin Travels, another NC State student.

Travels is just one of seven students working with Lee this summer; the others are current Wake Tech students participating in a joint internship program with NC State’s Department of Marine, Earth and Atmospheric Sciences. Funded by the National Science Foundation, the program — known as DIG-MAPS — provides paid research experiences for Wake Tech students interested in geology. 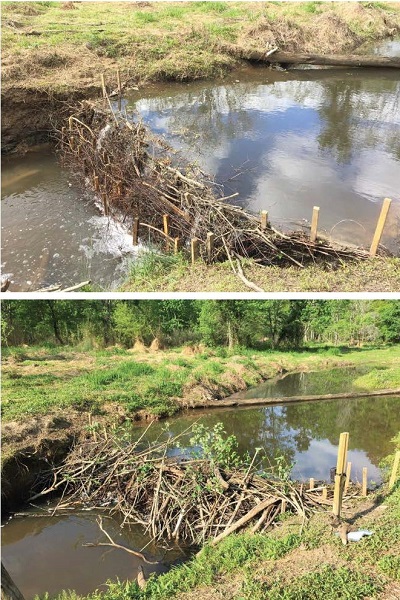 A beaver moved into the researchers’ approximation of a beaver dam (top) in the Yates Mill Pond wetland in Wake County and made its own improvements (bottom). Photos by Adam Lee.

“The program is now in its sixth year and over 60 students have participated, including those working with Karl Wegmann this summer,” notes John Fountain, a researcher at NC State and DIG-MAPS project lead.

“Over 90 percent of the students who have participated in the summer research opportunities have indicated they intend to major in geology. Many have transferred to NC State or other state schools.”

Lee participated in the very first summer of the program as a Wake Tech student, and enjoys helping others by providing hands-on experiences. “We involve them in pilot projects so they’re not just collecting samples,” he explains.

“It’s an opportunity to potentially participate in groundbreaking research. And the students that participate have been very successful in transferring to larger universities.”

Travels is one such example, having just finished his first year at NC State. He’s interested in further studying how the BDAs could trap or filter other pollutants such as hydrocarbons in urban environments.

“This research is definitely giving me a foundation to build off of and potentially to pursue a master’s thesis,” he says.

While they are still working on collecting data from the reconstructed BDA, Lee hopes this pilot project will lead to more demonstration projects and eventually, implementation at the watershed scale.

“Our hope is to take the data we were able to collect with the minigrant funds and use it to model beaver dam potential and associated water-quality benefits for larger projects,” Lee reveals.

They already are seeing local benefits in the diversity of organisms attracted to the BDAs. “Beavers are a keystone species and they bring in a whole ecosystem. We’re seeing more snapping turtles, water turtles and watersnakes that stop by to fish for the minnows that congregate,” Travels recounts.

“Letting nature repair itself may be more cost-effective.”

In essence, maybe we should leave it to beaver.

The beaver, Castor canadensis, is the largest North American rodent. Its stocky, compact body is covered with rich brown fur. It has webbed hind feet and a broad and flattened scaly tail.

The average adult weighs 35 to 40 pounds. When beavers reach 2-1/2 years of age, they select mates for life.

There is one species of the beaver in North America. Beavers are distributed statewide in North Carolina.

• Breeding
Monogamous. Sexually mature in two to three years. Mate for life and produce a single litter each spring.

• Young
Called kits. One litter per year, born in spring after gestation period of about four months. Typical litter contains two to six kits, eyes open at birth, weaned in six to eight weeks. Kits stay with mother the first year, remain with colony as yearlings for their second year.

• Life Expectancy
May live 20 years, but usually half that or less.

This information is adapted from the N.C. Wildlife Resources Commission. For more on beavers, go to www.ncwildlife.org and search for beaver.