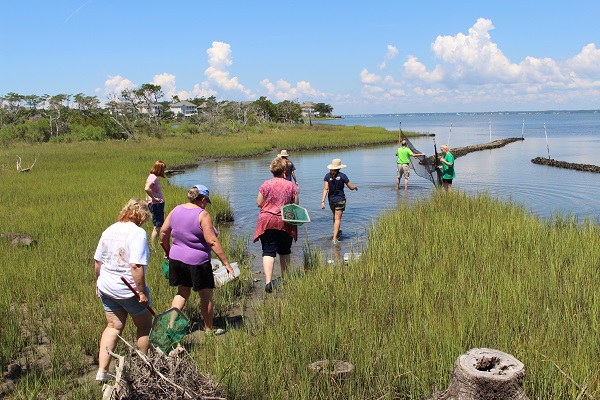 In the 1980s, many felt that North Carolina’s estuaries were living on borrowed time.

Years of population growth, along with agricultural and industrial development, had negative effects on the quantity and the quality of upstream water supplies. Within the estuaries themselves, large algal blooms, fish kills, shellfish area closures, and fish and crab diseases had grown in frequency and severity.

“The Chowan River up in Albemarle Sound was a solid algal bloom one time. The Pamlico River had its blooms and the Neuse River had dinoflagellates that were killing fish,” recalls former North Carolina Sea Grant Director B.J. Copeland.

“We had a crisis. We had to turn this thing around, or the seafood industry was going to go down the tubes.”

North Carolina was not alone. Nationwide, estuaries such as the Chesapeake Bay and Puget Sound were experiencing similar problems.

Laws enacted in the 1970s to protect these important natural resources — waters that provide habitats for an estimated 68 percent of the U.S. commercial fish catch — seemed unable to halt their decline. At the local, state and federal level, people knew that something had to be done. But what?

Fast forward to 2017: the Albemarle-Pamlico National Estuary Partnership, also known as APNEP, is celebrating 30 years of finding those answers through a watershed approach that takes the freshwater, brackish and saltwater parts of the estuary into account. The organization seeks to identify, protect and restore the significant resources of the Albemarle-Pamlico watershed through applied scientific research and outreach.

“Our role is to bring partners together that have common needs and goals,” says Bill Crowell, APNEP director. “We try to pool resources to reach those goals so that we can accomplish things that none of the organizations could do by themselves.”

An example of APNEP partnerships in action is the organization’s 2012 Comprehensive Conservation and Management Plan, a document that guides how APNEP uses its resources. The 2012 CCMP was the result of a group of diverse stakeholders working together over a period of three years.

Partnerships also are integral to APNEP initiatives such as monitoring submerged aquatic vegetation, or SAV. After initiating a collaborative effort to monitor SAV in the region, APNEP published a baseline map of SAV extent in 2011 that documented over 138,000 acres of aquatic grasses. Later this year, the organization plans to update this map with new data that will give researchers and managers insight into how SAV extent has changed. APNEP and its partners will use this information to develop protection and restoration strategies for SAV and fish species in the region.

The partnership also spearheads education and conservation initiatives throughout the Albemarle-Pamlico region. Since 2002, APNEP has supported over 40 projects that restore habitat or increase stormwater retention while also providing spaces for outdoor and environmental education.

DAWN OF A NEW PROGRAM

APNEP is part of the National Estuary Program, or NEP, a network of programs within the nation’s major estuaries that synthesize scientific research and gather stakeholder input — often from groups with differing priorities and focused on different parts of the watershed — to achieve shared goals.

Rivers and streams don’t flow according to political boundaries, such as county and state lines. As such, APNEP’s management boundaries encompass parts of Virginia and North Carolina. The success of APNEP initiatives in the overall watershed depends on cooperation between the two states.

The partnership is jointly supported by the N.C. Department of Environmental Quality and the Virginia Department of Conservation and  Recreation. 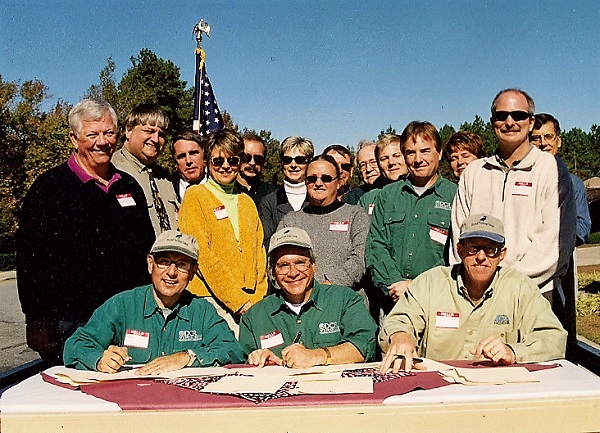 In 2001, the N.C. Department of Natural Resources and the Virginia Department of Conservation and Recreation signed a memorandum of agreement to cooperate on managing the Albemarle-Pamlico estuary. Photo courtesy APNEP.

From freshwater sources upstream to where they empty into the ocean, estuaries are intimately connected to the surrounding landscape. In North Carolina and Virginia, water from 10 major rivers — as well as innumerable smaller creeks, swamps and marshes — drains into the Albemarle-Pamlico estuarine system.

While the Albemarle and Pamlico sounds of North Carolina are the largest, the system also includes six smaller sounds. The Outer Banks barrier islands keep the Albemarle-Pamlico estuary system largely isolated from the Atlantic Ocean beyond. At approximately 31,000 square miles, the entire watershed is about the size of Belgium.

In 1987, Congress designated the Albemarle-Pamlico estuarine system as an “estuary of national significance” after then-Gov. James Martin’s nomination of the estuary. Later that year, Congress established the NEP to identify, protect and restore the areas through a watershed approach to management.

The Albemarle-Pamlico Estuarine Study, or APES, was the first designated NEP. The late Walter B. Jones Sr. of North Carolina, then a member of the U.S. House of Representatives and chair of the House Merchant and Marine Fisheries Committee that oversaw development of the NEP, had pushed for the state’s inclusion in the program from the beginning.

APES was a collaborative effort that benefitted from the support of Martin, Congress and the U.S. Environmental Protection Agency regional director, as well as participation from marine and coastal program leaders of many North Carolina universities and nonprofit organizations, including Sea Grant.

“In the early days of APES/APNEP, I was truly inspired by the passion of people with diverse interests, all committed to finding new approaches — together — to nourish and sustain one of America’s great estuaries. For me, learning to see problems and solutions through other peoples’ eyes has been foundational to my career-long success,” Rader says.

“We had the people out there — citizens, academics and agency people — and their perspectives are always different,” adds Copeland, one of APES’s first technical committee members. “But, if you get all those perspectives together, you can potentially come to some sensible solution.”

Since 1987, APES/APNEP has sponsored nearly 100 research initiatives in the Albemarle-Pamlico region, guided by the concerns of scientists and coastal residents. “The goal was to study what we don’t know, combine that with what we do know and try to formulate that into an action plan that might result in some improvements,” Copeland recalls.

“Things began to trickle into state policies and government, the way things are supposed to work. And it took off.”

GOING WITH THE FLOW

In 1994, APES culminated with the creation of its CCMP. This set of directives helped North Carolina and Virginia citizens protect their watersheds and sounds. The CCMP was developed with input from stakeholders and partners such as Sea Grant.

“It was a synergistic relationship,” says Walter Clark, director of the N.C. Division of Land and Water Stewardship and the N.C. Clean Water Management Trust Fund. He also is a former APNEP policy board chair and Sea Grant coastal communities and policy specialist.

Initiatives implemented by APNEP and its partners during this period still benefit North Carolinians today, including The Partnership for the Sounds’ Estuarium and the Clean Water Management Trust Fund. 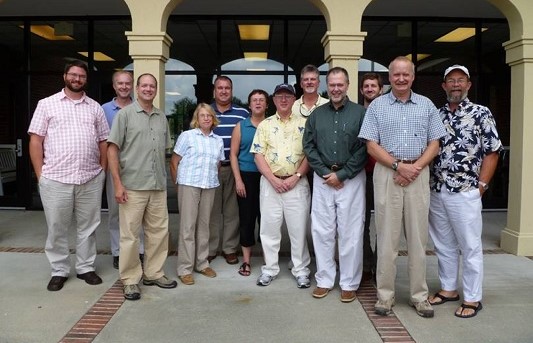 By the late 2000s, the CCMP needed to be updated to address recurring and new issues, Crowell notes.

This time, the plan would be based on the concept of ecosystem-based management, or EBM, that includes humans and multiple species when making management decisions.

Creating the new CCMP involved “a lot of moving parts,” according to Jack Thigpen, current Sea Grant extension director and past chair of the APNEP policy committee.

“It’s not just water quality, and fish and birds. It’s communities, the health of people and the health of ecosystems. The APNEP region is so big that different parts of it have different flavors — different strengths and weaknesses. This makes coming up with a comprehensive management plan for all that a really tall order,” Thigpen explains.

The new CCMP includes actions on topics ranging from invasive species to landscape-scale wetland and hydrologic restoration. However, APNEP and its partners aren’t told exactly how to reach these goals. This gives them the flexibility to adapt to changes in scientific knowledge and emerging regional issues.

Education and engagement are core components. Funding has helped create programs such as the Summer Teacher Institute with the University of North Carolina’s Institute for the Environment, Shad in the Classroom with the N.C. Museum of Natural Sciences, and the APNEP-Sea Grant Joint Graduate Fellowship in Estuarine Research.

Sea Grant also continues to help shape the future of the partnership. Susan White, Sea Grant executive director, serves on the APNEP Policy Board. She also leads the Water Resources Research Institute of the University of North Carolina system, bringing additional opportunities for partnerships on watershed-wide initiatives such as the N.C. Watershed Stewardship Network.

Other Sea Grant staff members are, or have been, on APNEP advisory boards and teams.

MOVING WITH THE TIMES

Summer in North Carolina still heralds algal blooms in parts of the coastal plain. Some fish populations have yet to rebound to historic levels. 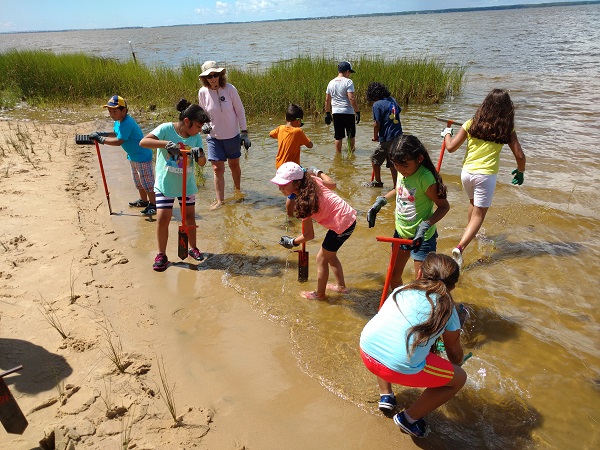 Changing public attitudes have created new opportunities to engage communities in protecting coastal resources. “I think people are more aware of the environmental services that estuaries provide — and with that awareness, there comes an understanding that these areas do need to be protected,” Clark adds.

Work remains to be done in the Albemarle-Pamlico region and within NEPs across the nation, Crowell explains.

“We still have nutrient issues in our rivers and sounds that impact the health of the system,” he says. “Both North Carolina and Virginia have taken steps to mitigate those impacts, but during that time, our population and inputs into our water have also increased. It’s a constant battle to figure out what’s best for the sounds, and will still allow the population and economy to grow and develop.”

“APNEP has grown from regional ecosystem study into a productive partnership, with folks from all walks of life working together to restore and protect this amazing place,” he says.

Join the Albemarle-Pamlico National Estuary Partnership at its 2017 Ecosystem Symposium: Eyes on the Horizon. The event is set for Nov. 1 at the McKimmon Center in Raleigh.

Participants will discuss issues related to the human communities, water quality and quantity, and natural systems within watersheds that flow into our sounds. The goal is to devise strategies to implement the region’s Comprehensive Conservation and Management Plan.

This year marks the 30th anniversary of the founding of APNEP and its parent organization, the National Estuary Program.

The symposium is free, and lunch will be provided. Details and registration are at apnep.org.