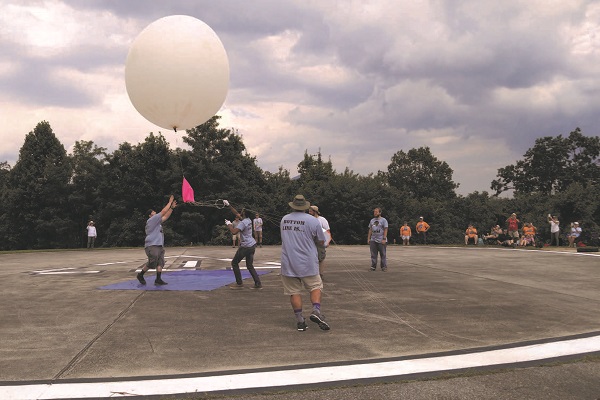 The Lenoir-Rhyne University team launched their high-altitude balloon during the solar eclipse. Photo by Frank Graff/UNC-TV.

Using special glasses and devices, millions of eyes turned skyward for a solar eclipse on Aug. 21.

In the United States, the band of totality stretched from Oregon’s coast to southwestern North Carolina, then diagonally across South Carolina. Even amateur astronomers took to detailed discussions of the corona, umbra and penumbra.

But for the high-altitude ballooning team from Lenoir-Rhyne University, the eclipse was serious science. “We met our major goals, streaming video from the payload during the eclipse — up to 70,000 feet anyway — and retrieved the student payload,” notes Doug Knight, team adviser.

“They worked very well together as a team,” he adds. “They each felt they had a part in the success of a project that none had any background in when we started about a year ago. The confidence in the team members is palpable.”

With funding from NASA, North Carolina Space Grant sponsored the team and a variety of special events across the state. For classroom lessons, videos, animations and more, go to science.unctv.org and search for eclipse.