STORY AND PHOTOS By DIANA HACKENBURG 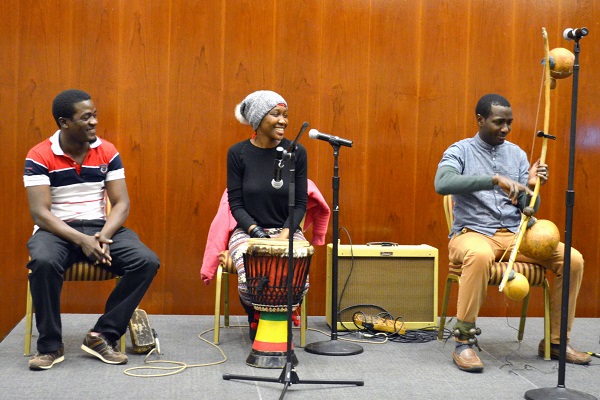 Members of The Nile Project gave a short performance during lunch on the first day of the conference.

As the man behind the music, Mina Girgis acts as a linchpin, pulling together artists to create a unique sound for an important cause: sustaining the Nile River. He spoke of his work with The Nile Project musical group during the opening keynote of the 2017 Water Resources Research Institute of the UNC System Annual Conference in March.

The Nile Project brings people together through music to improve understanding among neighbors, increase public involvement, and ultimately, promote community and water sustainability in the Nile region. Nicole Wilkinson, WRRI’s coordinator for research and outreach, saw many parallels between the group’s model and the goals of the conference. 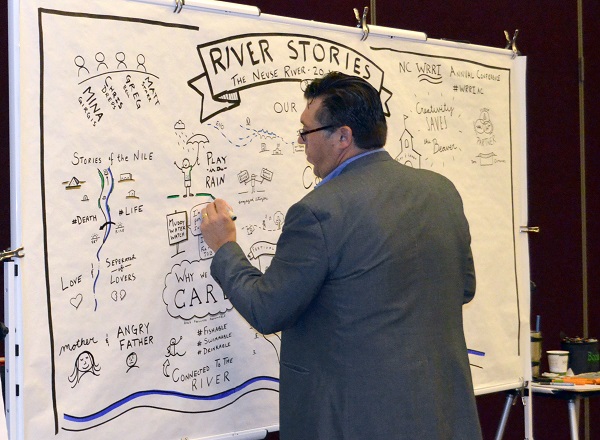 “We want to get as many different people as possible working on North Carolina water issues in the same room,” Wilkinson says. “Then, we can really see and understand all the great research underway, as well as any potential holes and opportunities for collaboration.”

Collaboration often is viewed as just one step of a process, but The Nile Project demonstrates how it can be its own worthy end product. Wilkinson hopes the WRRI conference serves a similar purpose as the foundation for long-lasting, effective partnerships.

Conference attendees appreciated the use of art and human stories to ground further discussions, as evidenced by the post-program evaluations. One participant remarked that having The Nile Project “added a wonderful cohesion to the program, as well as providing new ways to think about making connections.”

Speakers covered familiar topics, like water quality and stormwater, along with more novel areas, such as nanotechnology and public health. Two sessions this year focused on connecting water-resource research with the needs of private well owners, especially in areas with information gaps and health implications.

Drinking water throughout North Carolina was highlighted during the first day’s lunch with the presentation of the North Carolina Source Water Protection Awards. The winners included the Catawba-Wateree Management Group, Charlotte-Mecklenburg Stormwater Services and the Town of Huntersville, Keep Randolph County Beautiful, Mike Hicks and the Hicks Family, Southern Research Station of the USDA-Forest Service, and the Town of Garner and East Wake Television.

Special opportunities to engage outside the conference were another highlight for many attendees. Groups toured NC State University’s campus to learn about green infrastructure practices that control stormwater and protect water quality, as well as the NCSU Solar House, before heading to a concert featuring The Nile Project.

“I really enjoyed the additional elements incorporated into the conference this year,” wrote one attendee in the event evaluation, adding, “Field tours are a welcome addition as a way to learn and network in another environment.”

Before The Nile Project brought down the house with their energetic beats and mesmerizing vocals, attendees networked while viewing and bidding on submissions to the annual high-school student art contest. This year’s judges — Jane Harrison of North Carolina Sea Grant, Shaun Walker of Granville County Public Schools and retired highway patrolman Mike Dupree — chose winners from an expanded field of schools.

The conference poster competition for university students also boasted a strong pool of entries this year, noted John Fear, deputy director of WRRI. “Posters offer students a valuable opportunity to practice presenting their research and to network with other researchers and professionals,” Fear adds.

Many students and recent graduates took advantage of their close proximity to water-resource experts by participating in a mentorship program. Professionals volunteered as mentors and were paired with mentees to provide career guidance and serve as welcoming faces in a sea of people.

“I enjoyed meeting other professionals and providing a platform to make introductions,” a mentor explained. “It can be intimidating going up to random folks and introducing yourself, especially as a recent graduate or early in your career.”

Those connections are an important part of the conference, said other attendees. One appreciated “the ability to connect with local [North Carolina] practitioners and network. It’s invaluable.”

Next year marks the 20th anniversary of the conference, which will be held March 14 and 15 at the McKimmon Center in Raleigh. Look for a call for abstracts in August 2017 and announcements about the conference at wrri.ncsu.edu/conference.