ON THE WATER: Crab Pots Collected from Coastal Waters 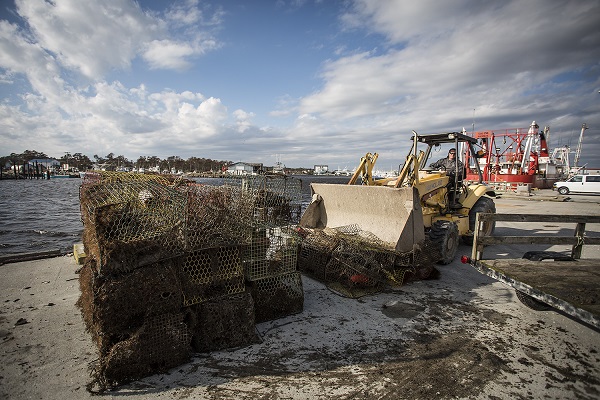 More than 4,300 lost or abandoned crab pots were removed from 1.2 million acres of state waters earlier this year.

The North Carolina General Assembly selected North Carolina Sea Grant to administer the Crab Pot Removal Pilot Program. Sea Grant contracted with the N.C. Coastal Federation, which worked with the N.C. Division of Marine Fisheries and its Marine Patrol, along with teams of commercial fishermen, for the project during the annual winter “no-potting” period.

“Results show that a full-scale, statewide program is operationally achievable, as well as of value in improving the condition of coastal fisheries and habitat,” the federation explains.

The program focused on lost gear, sometimes called ghost pots, and on whether they continue to catch crabs and other species. Often missing buoy markers, submerged pots also can become navigational hazards.

Since the 1990s, the Marine Patrol has led the removal program. The federation coordinated demonstration projects from 2014 to 2016 in the northern coastal region, enlisting watermen to help the patrol gather pots. Those demonstration efforts received funding from Sea Grant and the National Oceanic and Atmospheric Administration’s marine debris program.

In addition to the statewide efforts by the federation and watermen, several factors are cited as contributing to the 2017 tally, the greatest since 2004 for the combined three coastal regions.

In 2016, flooding and high winds came with spring storms, as well as in the autumn with Tropical Storm Hermine and Hurricane Matthew. Some pots were identified as having traveled more than 10 miles from their likely original setting. 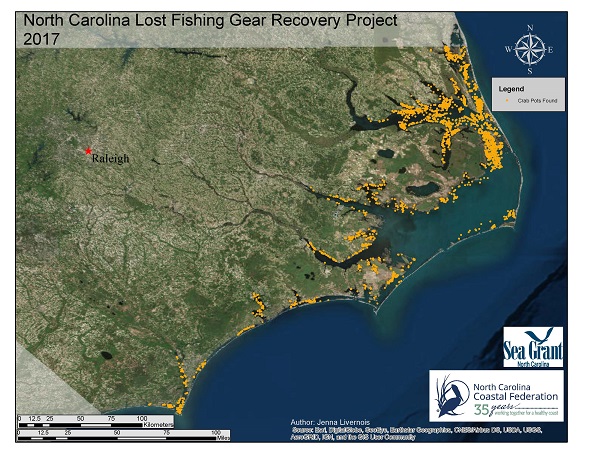 The watermen’s knowledge of where lost pots are likely to end up due to currents and bottom types, along with their ability to access shallow water, also increased the number of pots retrieved. Their vessels and crabbing equipment made retrieving pots easier and more efficient than using the patrol’s law-enforcement boats.

The federation also leveraged resources to conduct associated shoreline cleanups in each of the three coastal regions. In those events, held on a single day, a total of 138 volunteers removed 3.53 tons of marine debris, including, but not limited to, lost fishing gear.

The combined efforts were included in the crab-pot program report Sea Grant provided to the General Assembly earlier this year.

“We are pleased to continue to serve the General Assembly and the citizens of North Carolina,” White adds.