SEA SCIENCE: Restoring Our Oysters: Dealing with the Sponge Problem 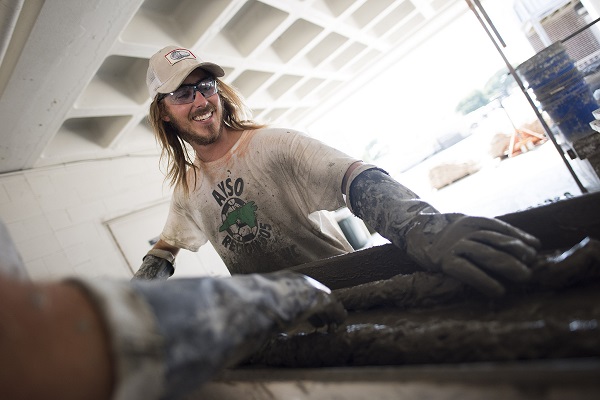 Gregory Sorg builds the substrate on which the oysters will grow. Photo by Jon Gardiner/UNC Chapel Hill.

Niels Lindquist, an ecologist at the University of North Carolina at Chapel Hill’s Institute of Marine Sciences, noticed that many of the oysters served at roasts were difficult to open because of brittle shells. The oysters had small holes in their shells, a telltale sign of an infestation by the boring sponge, a common estuarine organism in the family Clionaidae.

Infested oyster shells often crumble in the hands of the shucker, leaving bits of shell in the sweet meat. The brittleness also makes the bivalve more vulnerable to predators that can crush its shell. Such infestations create a major problem for oyster populations.

Boring sponges are common in the salty portions of estuaries globally, and North Carolina is no exception. Not only can boring sponges spoil your oysters, but they also create an “economic problem, and men in the business of collecting or raising oysters agree that Cliona is one of the principal causes of loss,” noted zoologist Max Walker de Laubenfels. He was writing about boring sponges in the Newport River in 1947, but his conclusion still holds true today.

Lindquist and colleagues recognized that carbonate materials, such as oyster shells, were highly susceptible to infestations by the boring sponge. The oyster pest may become more prevalent as the water salinity in our estuaries increases from sea-level rise and coastal development. Boring sponges are moving farther into the estuaries, following the saltier water. 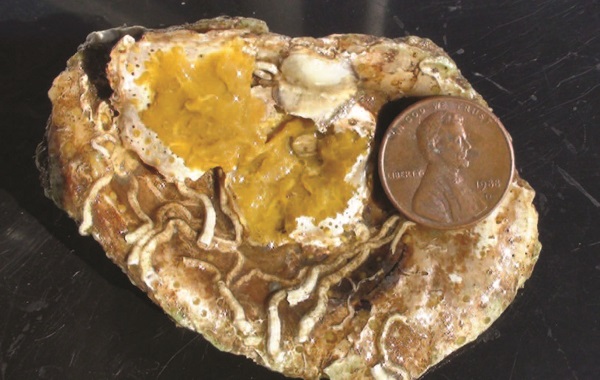 This oyster has small holes in its shell, the telltale signs of an infestation by boring sponge. Photo by Niels Lindquist/UNC IMS.

Added to water-quality concerns closer to the shoreline, these changes are narrowing the regions that are open to shellfish harvests and are relatively free of boring sponge.

Free-floating oyster larvae need a base, or substrate, on which to attach. Currently, a common method of oyster-reef restoration and habitat enhancement in the U.S. is to place recycled oyster shell on the bottom of the estuary with the hope that baby oyster larvae will attach and grow into adults.

Given the susceptibility of these shells to the boring sponge, researchers sought to determine if changing the substrate materials for reefs would enable oysters to live longer before the sponge became an issue.

They wanted to test whether using noncarbonate materials could offer an advantage over oyster shell and carbonate-based marl, a sedimentary rock composed of clay and carbonate materials, in constructing oyster reef. Lindquist received an N.C. Fishery Resource Grant from North Carolina Sea Grant, along with David Eggleston, director of NC State University’s Center for Marine Sciences and Technology.

The grant supported the construction of 80 oyster reefs in the North and Newport rivers. Lindquist and Eggleston worked with two local commercial fishermen, Adam Tyler and David “Clammerhead” Cessna, to find suitable locations and to construct and monitor the reefs.

The team used four substrates to build their reefs. The researchers tested two calcium carbonate substrates: loose oyster shell and marl. The two types of noncarbonate materials were granite gravel similar to that found in driveways and chunks of cobble-sized concrete. 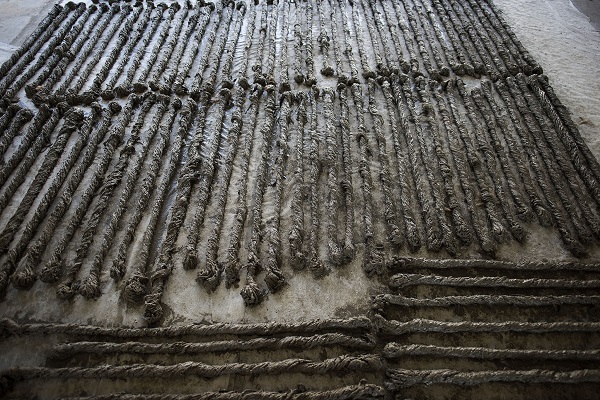 These pieces of substrate consist of plant fibers infused with cement and are designed to attract oyster larvae. Once the fibers break down, only the oysters will remain. Photo by Jon Gardiner/UNC Chapel Hill.

For my graduate work, I analyzed data from the 80 reefs, up to 54 months after construction. In the less salty regions of the estuary, oysters settled comparably among all substrate types and thrived. Essentially, the substrate material had no effect on how well oyster reefs grew at low salinities during our study. On the reefs in the saltier regions, predators such as the Atlantic oyster drill, a sea snail, quickly mowed down recently settled oysters.

In coastal development, carbonate-based materials such as marl are sometimes used to build jetties and breakwaters. Scuba divers have reported a heavy infestation of boring sponges on boulders around local jetties made of marl. These infestations can undermine the structural integrity of the jetty because the sponge erodes the material, making the boulders more susceptible to damage. The infested boulders can also act as a source of boring sponges to the surrounding oyster populations.

While it is unrealistic to attempt to entirely eradicate boring sponges, oyster growers and restoration practitioners can take steps to alleviate the negative impacts of boring sponge on oyster populations, such as by choosing noncarbonate substrates for reefs. This North Carolina Sea Grant-funded research provides a basic framework for addressing the issue of the boring sponge so that we may more effectively restore oysters.

Gregory Sorg holds a master’s degree in marine sciences from the University of North Carolina at Chapel Hill’s Institute of Marine Sciences. His graduate work focused on oyster-sponge ecology, specifically the sustainability of substrates used in oyster restoration.