What’s in a blackened-fish taco? For most of us, it is simply fish, seasoning, salsa and tortillas.

For Evan Ferguson and her high-school students, their tacos start with an underappreciated fish: cape shark. Then, their special recipe stirs in a desire for fresh, local seafood in the school cafeteria, mixed with the sweat and hard work of a fishing community.

They are asking a lot from a humble taco.

Ferguson, the marketing and foods teacher at Cape Hatteras Secondary School, and her students have developed an entrée that incorporates cape shark, the seasonings available in a school cafeteria and the appetites of high schoolers.

“They are really becoming aware that they need to start making healthy choices, and they also want to make choices that have a positive effect on their community,” Ferguson says of her students. “By introducing fresh, local fish and local seafood back into our cafeteria menu, that would help to support our local economy.” 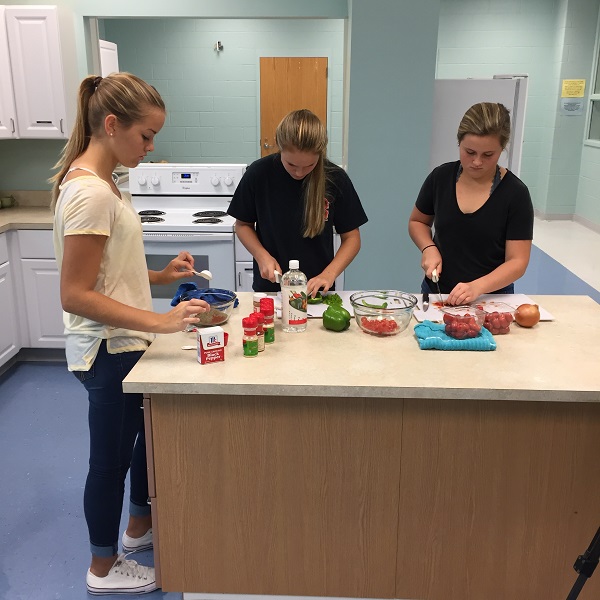 Cape shark, also known as spiny dogfish, typically are abundant in North Carolina waters in the winter. Once caught, they are trucked to a processing plant in New England, then shipped to Europe. The shark becomes the fish that goes with chips, a beloved pairing served throughout the continent.

North Carolina fishermen get pennies per pound for the cape shark they catch. However, some people, including Ferguson, wonder if the fishermen might earn more if the shark were processed in state.

To do that, there would have to be local consumer demand. As a start, Ferguson is looking at the school cafeteria, with help from the N.C. Community Collaborative Research Grant Program. Jointly funded by North Carolina Sea Grant and the William R. Kenan Jr. Institute for Engineering, Technology and Science at NC State University, the program draws upon the expertise of scientists and the knowledge of community members to focus on topics vital to the state’s coast.

In this case, Ferguson and her students — some of whom are part-time commercial fishermen themselves — are the local experts.

First, the class had to overcome their initial wariness of eating shark.

“No other school would have shark as a meal,” acknowledges Karlene Ballance, one of Ferguson’s students. “I was definitely kind of weird about it at first.”

The fisherman’s daughter took the plunge anyway. It wasn’t so bad, she reports.

“No matter what it looks like or what you think it will taste like, just try it,” the high-school sophomore advises. “You need to be open to trying new things.”

Next, the students had to build a recipe from ingredients already available in the school cafeteria. They wanted their dish to be cost-effective, using what already was there.

“We had to use our imagination to work with what we had,” says sophomore Maya Damitio. They found, among other things, 8-inch tortillas and the spices to make a blackened seasoning.

The students collaborated on many iterations of the recipe, tackling questions such as how much seasoning to add, what to include in their salsa, and whether to heat the fish straight from its frozen state or thaw it first.

“Sometimes you just have to use what you have and make it work,” Ballance agrees.

This semester, Ferguson and her students are holding tasting panels to gauge people’s reactions.

In addition, the team will hold a tasting panel for students from Conetoe Family Life Center in Edgecombe County, partners in this project.

In January, Ferguson and her students still were waiting for the cape shark to show up. They want to use fresh, locally caught product, after having initially developed their taco using frozen shark from other U.S. sources.

“What I like about this project is that the students are leading it,” says Barry Nash, one of several advisors on this project and Sea Grant seafood technology and marketing specialist. “They conducted the initial product development. They are recruiting people for the sensory panel. They are learning how to evaluate new ingredients for the school, and what it takes to test them.”

Another part of this project is moving full STEAM ahead, rolling in science, technology, engineering, art and math.

“We’re trying to do it in unison so that it will create a buzz within the school,” Ferguson explains.

“I feel that once this project starts going somewhere, it’s going to be cool to say that we were part of it,” Damitio adds.

According to Ferguson, so much can come out of this small project.

“We’re doing this for the students and their health, but we’re also doing it for the community at large, and to keep traditions alive, as far as fishing families,” Ferguson notes. “I really hope that we can use this information to open up conversation about how can we get real food back into our cafeteria.”