Cleaning and restoring historic documents and artifacts aren’t the first things you may think of in post-disaster emergency response. But to the staff at the N.C. Department of Natural and Cultural Resources, it’s an important part of recovery.

The DNCR Cultural Resources Emergency Support Team, or CREST, helps small public and private museums, libraries, and other facilities. It offers advice to private citizens who want to clean and preserve their own documents and photos. 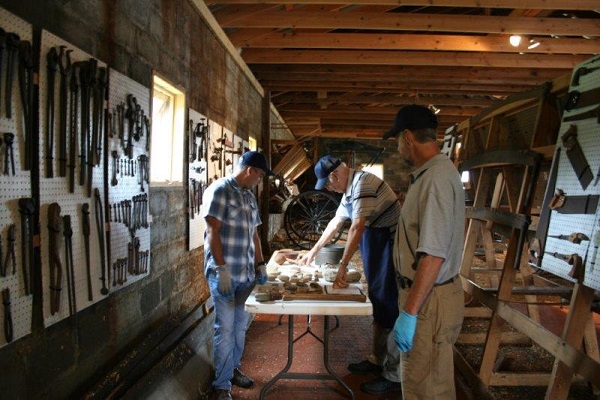 Collections specialists at Museum of the Albemarle work to preserve artifacts at the Craftsman and Farmer’s Museum in Windsor. Photo courtesy NCDNCR.

“The department enlists dozens of experts from the coast to the mountains to help with disaster recovery of public and private cultural heritage collections,” says Adrienne Berney, CREST coordinator. “Our statewide responders join forces with Area Cultural Resources Emergency Network leaders and conservators to assist collecting institutions across North Carolina.”

Following Hurricane Matthew in October 2016, CREST members scheduled workshops on properly cleaning and preserving personal documents and other family treasures. They also developed a database of nearly 200 institutions affected by the hurricane.

When Tropical Storm Julia caused the Cashie River to flood the town of Windsor in September, CREST mobilized to assist the 4-year-old Craftsman & Farmer’s Museum to help restore flood-damaged wooden and metal tools.

CREST members based in Raleigh and eastern counties, along with three employees from the Museum of the Albemarle, spent several days cleaning and drying artifacts on-site. The museum flooded a second time after Hurricane Matthew, and the team continues to consult with town officials about next steps.

After the storms, State Archives staff also reached out to veterans of the armed forces and N.C. National Guard whose military documents or photographs were damaged, offering advice and resources for personal records, military training manuals and other archival items.

“We want all veterans affected by the storm to know that we care about them and preserving their history,” said Military Archivist Matthew Peek.

In partnership with the North State Journal and Waste Industries, DNCR also sponsored a children’s book drive to replace books lost in floods. More than 1,000 children’s books were delivered to shelters, schools and public libraries.

Through a partnership with the N.C. African American Heritage Commission, the department collected toiletries, tools, cleaning supplies and other items for residents of the historic town of Princeville, which started as a community of freed slaves at the end of the Civil War and later became the nation’s oldest town incorporated by African Americans.

Michele Walker is a public information officer for the N.C. Department of Natural and Cultural Resources, www.ncdcr.gov.