In these winter months, juvenile fishes and crabs — also known as nekton — likely are missing their summer nursery habitat: seagrasses. Specific seagrass species die back once summer water temperatures get too hot. This is similar to tree leaves that change color in the autumn and eventually fall off. Seasonal shifts also can be found in seagrass habitats, with consequences for juvenile nekton. 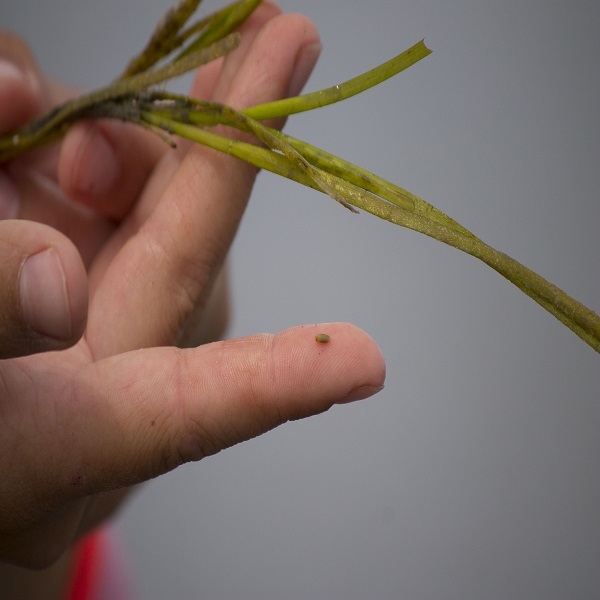 When water temperatures warm up in the summer, some seagrasses, such as eelgrass, Zostera marina, naturally begin to degrade and decompose. Like trees budding new leaves in the spring — only occurring a little earlier — eelgrass will start growing back over winter, reaching its peak cover in mid-summer. That’s when new juvenile nekton use the grass as a safe place to find food and hide from predators.

As a doctoral student at the University of North Carolina at Chapel Hill’s Institute of Marine Sciences, I have been working to better understand how changes in seagrass species across seasons affect the habitat use of nekton in our coastal waters.

My field research has been funded through a fellowship from North Carolina Sea Grant and the N.C. Coastal Reserve and National Estuarine Research Reserve.

North Carolina supports more submerged aquatic vegetation than any other Atlantic Coast state, except Florida. The dominant seagrass species in our state, eelgrass sits at its thermal tolerance and southern geographic limit, so it may be affected by temperature increases.

Why is this important? The global seafood industry provides food for 10 to 12 percent of the world’s population. That industry depends on healthy fish habitats.

Many important fish and seafood species grow up in estuaries. Thus, these nursery habitats nurture the delicious seafood we eat. Fully understanding these systems can contribute to the productivity of many commercially and recreationally significant species.

These systems are critical even if you’re not a seafood fan. Nursery habitats provide other irreplaceable services, such as protecting our coasts and homes from storms, filtering harmful chemicals and pollutants from the water, and trapping sediments and nutrients that might otherwise flow into our waterways.

Fishermen wonder all the time where the fish are, and so do the scientists. I use underwater hydrophones, or listening devices, to hear where the fish are. This allows me to figure out which nursery habitats are important to them, as well as how those choices change seasonally. 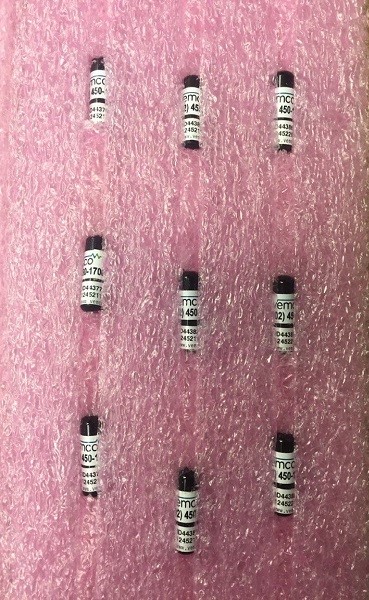 I wanted to find out where the fish go in the estuary and what habitats they use as seagrass species communities change, from summer through winter. To answer these questions, I deployed an array of 21 listening devices located in seagrass beds at seven sites located around the Rachel Carson National Estuarine Research Reserve in Beaufort, North Carolina.

It’s a nerve-racking process. Fish are constantly moving. Once you release a fish back into the estuary, you may never see — or hear from — it again.

Gag grouper and gulf flounder were our model species because we know they rely on seagrass as nursery habitat. I caught young fish throughout the summer, as they grew large enough for tagging, and surgically implanted an acoustic transmitter into each fish. After a 24- to 48-hour recovery in the lab, the fish were released into the grass bed where they had been caught.

As a marine ecologist, I am a fish finder, fish doctor and fish conservator, all in one.

The tag emits a unique pulsed chirp when it is within range of a listening device. That data will be used to calculate the duration those fish reside within grass beds as water temperatures increase in summer and affect seagrass species cover.

Once the experiment is set up, the listening device does all the work. Data constantly are being recorded, but only if the fish are still in the estuary near our devices, in grass beds that can change from green in summer to brown, mostly muddy-bottom habitats in winter.

In October 2016, I dove into very cold water to retrieve data from each listening device. Although I am still shaking from that chilly day, I think I am going to have a pretty interesting story to tell.

I am currently processing the 250,000 detections received. That number is a good sign the fish didn’t leave the area soon after release, which had been a constant fear. In addition, I will make an interactive map to identify where the gag grouper and gulf flounder go as their preferred seagrass species declines or seasonally degrades.

By learning more about the effects of temperature on seagrass species composition and habitat use by nekton, managers can make more effective decisions about which habitats to prioritize as managed areas.

All of us — not just the fish — can reap the benefits of well-managed seagrass beds.

Danielle Keller is a doctoral student at the University of North Carolina at Chapel Hill’s Institute of Marine Sciences. Her research focuses on understanding how structured habitats affect ecological communities at landscape scales. Get research updates at dabbey.web.unc.edu or on Twitter at @hioctopi.