Under the right conditions, ordinarily diminutive algae can form a slimy blanket over large swaths of coastal water — and cost communities millions of dollars. These harmful algal blooms are increasing in frequency and magnitude all over the world, largely due to nutrient pollution.

Too much algae can disrupt food webs, lead to low oxygen conditions and fish kills, and, if the bloom-forming species is toxic, result in food-web contamination. Algae serve as a food source for a variety of marine organisms, and food-web transfer of algal-related toxins can harm sea birds and marine mammals. 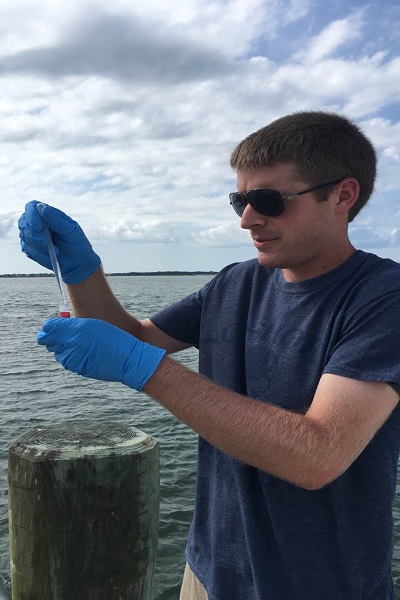 Amnesic shellfish poisoning is best documented off the West Coast, where one of the largest and most toxic events on record happened in 2015. Scientists know from deepwater particle collection that benthic organisms living several hundreds of meters below the blooms on the seafloor can also become toxic. But researchers weren’t quite sure of the mechanisms involved.

In our recent study, published in the journal Harmful Algae, we simulated how toxin dynamics change as Pseudo-nitzschia form aggregates, known as marine snow, and sink to the bottom. The clumping and sinking of cells typically is observed when the algae run out of nutrients and the bloom starts to “die off.” This study was the first to document how toxins, specifically domoic acid, are produced throughout marine-snow formation and how long they persist in the environment.

In a laboratory simulation, we found the dissolved toxins in marine snow exceeded the amounts inside the original algal cells by several orders of magnitude. This accumulation makes a potentially “toxic environment” for organisms associated with marine snow as it falls, and for the animals at the seafloor that ingest it. This new information could influence food-safety policies in areas with toxic blooms.

So far, we have detected the toxin in a few samples but at concentrations much lower than those typical for the California coast.

We intend to establish a baseline on Pseudo-nitzschia abundance and/or toxicity within North Carolina waters to identify trends and the emergence of potential risks for human exposure. Several undergraduate students continue to contribute to our time-series research, gaining hands-on experience in the field and the lab.

Recently, our research also expanded to study cyanobacteria — or blue-green algae — blooms in the Cape Fear River. This Sea Grant-funded project is a collaboration with Hans Paerl and Nathan Hall of UNC-CH’s Institute of Marine Sciences, Scott Ensign from AquaCo, and local water treatment plants.

In addition, my lab received a Sea Grant minigrant in August 2016 to test for cyanobacterial toxins in the Chowan River system where scum-forming blooms continue to make headlines. So, please stay tuned!

Astrid Schnetzer is in the Department of Marine, Earth and Atmospheric Sciences at North Carolina State University. Her research addresses how natural and anthropogenic processes shape plankton assemblages, and how those changes impact ecosystem function and stability in aquatic environments.