Flounder Regulations Got You Floundering?

This is the season when many North Carolinians are thinking about flounder on their dinner tables.

However, the N.C. Marine Fisheries Commission, or MFC, recently instituted changes to the commercial and recreational harvest of southern flounder, effective Jan. 1, 2016.

Does that mean no flounder for the holidays?

Fear not, say some North Carolina Sea Grant experts. Some flounder will be available at the market this season. 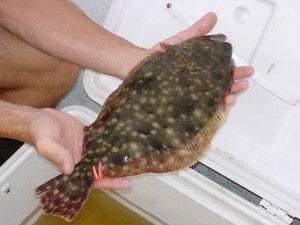 Juvenile southern flounder grow and shelter in our state’s estuaries. In the fall, adults migrate out of estuaries and move southward. Peak catches occur from September to November.

Currently, state fisheries managers are unable to fully assess its stock status in North Carolina waters. However, they are concerned about the sustainability of current harvest levels of southern flounder. Data show a coastwide drop in juvenile and adult populations.

The new restrictions, intended to safeguard against the further decline of the southern flounder population, will mean fewer southern flounder caught by anchored, large-mesh gill nets. Starting in 2016, gill nets will have to be removed from coastal waters statewide on Oct. 16. Fishermen will be allowed to use pound nets and gigs to catch the fish in the fall, but with lower limits. When the total allowable pound net harvest is reached, the commercial gig fishery also will close.

The southern flounder gill net fishery also faces restrictions to reduce harm to endangered and threatened sea turtles and sturgeon. That fishery is divided into regions that may be closed to gill nets based on observed interactions with these protected species. (Learn more about this topic in a recent story in Coastwatch.)

These regulations likely will mean southern flounder will be harder to find in markets next fall — but not impossible. 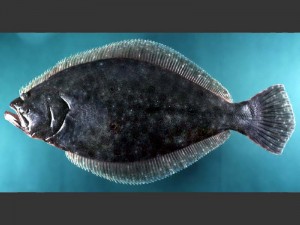 The season for summer flounder begins in January and closes when 80 percent of the quota has been meet. It reopens in November until the final 20 percent has been caught.

Between January and March, North Carolina fishermen harvest principally summer flounder. At this time, the fish are found offshore along the edge of the continental shelf. In U.S. waters, this species is most common in the mid-Atlantic region from Cape Cod, Mass., to Cape Fear, N.C. The summer flounder stock was rebuilt in 2010 and is considered to be viable.

In 2014, the National Marine Fisheries Service, or NMFS, within the National Oceanic and Atmospheric Administration, conducted a stock assessment for summer flounder for U.S. waters north of Cape Hatteras. The data indicated that, while the stock was not overfished, the fishing rate for 2014 was above what was needed to promote full population growth. A comprehensive amendment to how summer flounder is managed is underway, with completion expected in 2017.

This eventually could translate into less availability of summer flounder. But, not right now. 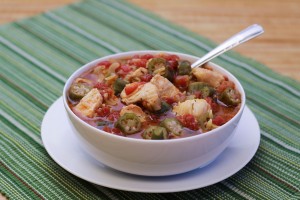 Farm-raised catfish is one of many options that can be used as a flounder substitute. Find the catfish gumbo recipe here. Photo by Vanda Lewis.

What is a fish lover to do?

Selecting locally farm-raised fish is one option. Sea Grant has worked with researchers and growers to test the viability of southern flounder aquaculture in laboratory and commercial settings in North Carolina. Although the aquaculture of southern flounder has not yet been commercialized in the state, you can find other species of farm-raised fish including black sea bass, catfish, hybrid striped bass, rainbow trout and sturgeon. Ask your fish retailer if these choices are available.

In addition, talk to your fishmonger for good wild-caught alternatives to flounder. This person is knowledgeable about other fishes that are available with similar taste and texture.

One possibility is Atlantic spiny dogfish, also known as Cape shark. Its meat is firm and has a flaky texture. It’s also very forgiving — the fillets can be cooked in many ways and still stay moist.

NMFS notes that dogfish is a smart choice, because this species is managed in a sustainable manner and responsibly fished in the U.S. Starting next year, North Carolina Sea Grant staff will be working with restaurants to develop Cape shark recipes that will appeal to local consumers.