Clear Waters Ahead for Oyster Restoration

Kathleen Onorevole is a master’s student in Michael Piehler’s lab at the University of North Carolina at Chapel Hill’s Institute of Marine Sciences in Morehead City. She studies the impact of ecological restoration on nutrient cycling. 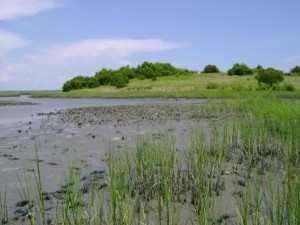 An exposed oyster reef borders salt marsh grass at one of my research sites. Photo by Kathleen Onorevole.

There are two types of people who care that the word February includes the letter “r”: spelling bee contestants and oyster enthusiasts.

Whatever your opinions on spelling, it’s hard to argue that oysters are d-e-l-i-c-i-o-u-s.

They’re also timely: We’re in North Carolina’s wild oyster season, which traditionally had been identified as months with an “r” in the name. It’s easy to appreciate oysters at suppertime, but this shellfish is important to our coasts for reasons beyond the culinary.

As a graduate student working in eastern North Carolina, I’ve been lucky enough to experience this firsthand.

To understand some of the benefits of oysters, it’s useful to start with their food source: algae. Marine algae use nitrogen in the water to grow. When it rains, stormwater runoff delivers high concentrations of nitrogen to coastal waters from sources such as fertilizer. Just as the nitrogen in fertilizer helps grass and crops flourish, it can promote rapid algae growth, leading to a scenario called an algae bloom.

Have you ever had a trip to the lake spoiled by green slime? If so, you can appreciate that happy algae does not equate to happy humans. Blooms are smelly, can lead to widespread fish death, and can even contain toxic compounds. It’s bad news — until you add oysters!

Oysters are filter feeders, meaning that they consume algae as they filter water over their gills. Not only do oysters limit blooms by eating algae, they remove some of the nitrogen that can trigger those blooms in the first place. In 2010, North Carolina Sea Grant funded an oyster research project in Michael Piehler’s lab at University of North Carolina at Chapel Hill’s Institute of Marine Sciences. Ashley Smyth, who was a doctoral student at the time, also was involved in the project. 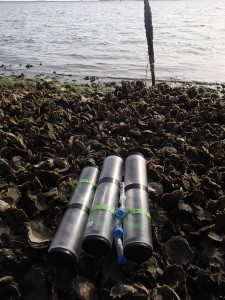 Piehler leveraged the successes of these Sea Grant-funded projects to obtain a grant from the National Science Foundation. That’s where my research comes in. We already know that both oyster reefs and salt marshes remove excess nitrogen through denitrification. There are many efforts in North Carolina to restore these habitats, and one purpose of restoration may be to enhance nitrogen removal.

I’m trying to determine how denitrification changes over time following restoration. Can we expect oyster reefs and salt marshes to start removing nitrogen soon after they’re restored, or will it take a few years?

To investigate, I’ve studied four salt marshes with fringing oyster reefs near Morehead City, N.C., where IMS is located. These habitats were restored at various points in the past, from 0 to 20 years before I started my research. 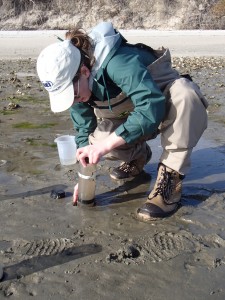 In this picture, I am collecting a sediment core. First, I push the core, a hollow plastic tube, about halfway into the ground. Then I pour water into the top part of the core, pull out the tube, and cap it with rubber stoppers. Photo by Luke Dodd.

Each season, I trek out to the sites and collect sediment cores by sticking a hollow plastic tube about halfway into the ground. Back in the lab, I connect these cores to a pump system that keeps water flowing through the top part of the core. I then measure the amount of nitrogen gas dissolved in that water.

My experimental design is like a time machine. Instead of tracking one restored site for decades and staying in grad school forever, I treat each site as a snapshot of a model restored system changing over time.

The upshot so far? After restoration, summer denitrification rates are relatively low for the first couple of years. However, after about six years, those summer rates increase and remain high for the next 14 years.

This pattern is not identical for each season, and I’m continuing to explore why. Summertime is important though, since the higher likelihood of algae blooms makes nitrogen removal particularly necessary.

As I have learned from the television show Shark Tank, it’s unwise to invest in something without enough knowledge to predict its chances of success. The same idea can be applied to restoration planning. If a coastal municipality wants to increase aquatic nitrogen removal, it may consider restoring an oyster reef and salt marsh.

My research suggests that denitrification will not peak until about six years following restoration, so restoration might not be a good fit if nitrogen removal is an immediate priority. However, restoration may contribute to a solution for communities looking to decrease aquatic nitrogen in the near future.

When I describe my research, I’m often asked whether I eat oysters. Absolutely! If anything, I’m happy to support an important fishery that bolsters oysters’ positive impact on our coasts.

There may only be a few weeks left to enjoy North Carolina’s wild oysters, as last year’s season ended on March 31.  So, bon appétit!