Many years ago, I married into a Harkers Island family with a long, rich history of commercial fishing along Core Banks and Back Sound. They fished for whatever was “running,” and that’s what they ate too.

For this reason, my late mother-in-law, Ruth Lewis, knew how to catch, clean and cook every kind of seafood around — and everything she made was exceptional.

Living just up the road from her was rewarding with many, many seafood dinner invitations. She always was cooking away, but never with a recipe.

On many occasions, I observed with great interest as she “baked” flounder in an electric skillet. I thought it was very clever and it was amazingly delicious.

Although Ruth never wrote down that recipe, this savory dish is a modification of what she would make.

Here, I use triggerfish in place of flounder. You may use other firm, white-fleshed fish, such as black sea bass, mahi mahi, snapper or grouper, depending on the season.

In this recipe, I also follow Ruth’s occasional practice of using sweet potatoes. They add an extraordinary layer of flavor that enhances the broth with a slight sweetness. Serve this up with cornbread or with Ruth’s turn cakes. 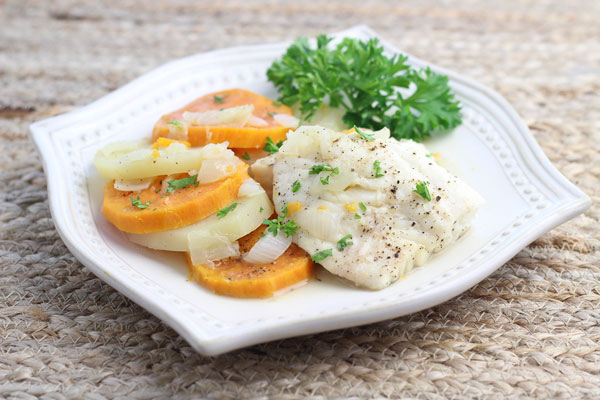 Season potatoes with salt and pepper. Layer the potatoes in the skillet and top with onions. Pour water around the vegetables. Cover electric skillet and cook on 350 F for 15 minutes.

Brush fillets with the remaining 2 tablespoons of butter, and season with salt and pepper. Place them on top of potatoes and onions. Cover skillet and continue to cook for 15 minutes, or until done. Sprinkle parsley on top and serve.

« Hunting Oysters
The Faces Behind our Maritime Industry »