Story and Photos By Liz Brown-Pickren

Like flocks of geese seasonally migrating in search of more comfortable climates, boaters travel the Atlantic Intracoastal Waterway, also known as the ICW, in the spring and autumn. Marinas and communities located directly on the ICW benefit by providing these snowbirds with moorage, fuel, provisions and other necessities. 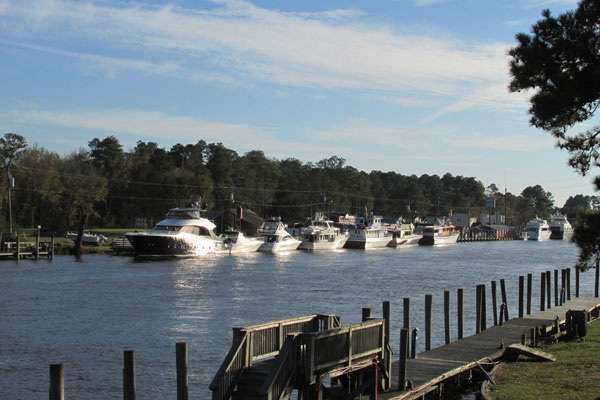 Usually, the Coinjock Marina empties out every morning and fills up every evening.

Some boaters explore areas off the ICW. But what do they want when taking side trips? Knowing those answers would help communities provide amenities to attract these visitors.

Also, weather influences the speed of the voyage. “When winter is nipping at your heels on your trip south, you get a move on,” one captain told me. “In the spring, if you run into cold weather, you slow down until it thaws out a bit.”

Dr. Hans Vogelsong, a researcher in recreation and leisure studies at East Carolina University, wanted to tally transient boaters using the ICW, calculate how much they spend during their trips, and identify amenities that entice them to take side trips to nearby communities. I was one of two interviewers for his North Carolina Sea Grant-funded project.

Is it really work if you get paid to chat with interesting people?

My very first survey at the Alligator Marina near Columbia left me fantasizing about quitting school, buying a boat and meandering wherever the wind would blow me. (Don’t worry, dear advisors. We’ve all invested too much for me to quit now.) A few hard-luck stories about breakdowns, costly repairs and bad weather gave me a more realistic view. 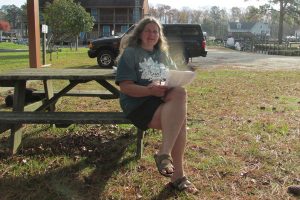 Evenings are the best time to survey boaters. So there was plenty of time for me to catch up on reading.

Finding a sailboat fueling up in the marina in the afternoon proved to be the exception. During the day, as long as the weather holds, boats are traveling. So I timed my visits for evenings, after lines are secured, power and water attached, and the boaters are likely to be on deck relaxing with a cocktail while watching the sunset.

My territory was the northern part of the North Carolina coast. I focused on the Coinjock area where two marinas are among the few moorage points between Elizabeth City and Belhaven. The Midway and Coinjock marinas sit across the canal from one another and both offer docks directly on the ICW.

At Coinjock Marina, personnel identified by grey polo shirts attend to boater needs. The Midway Marina has a family atmosphere, with the owners working directly with the boaters.

I conducted short, in-person surveys with boaters about the length, origin and destination of their trips, and whether they owned their boats (three-quarters did) or were hired to deliver them. I also asked them to complete a longer mail-back survey when they arrived at their destinations. For those who were going to a different country — five were heading to the Bahamas, two to Cuba and one to Costa Rica, each one reigniting my fantasy of sailing away — I requested that they mailed back the survey before they left the United States.

Although some boaters declined the mail survey, almost all of them were eager to discuss their voyages.

In addition, we talked with local leaders, such as municipal officials, economic development experts and tourism specialists, in communities adjacent to the ICW. We wanted to learn about their perceptions of transient boaters.

Mostly we found agreement between what communities think boaters want and what boaters actually seek. The most desired amenities are fuel, deepwater dock access, grocery stores, internet and inexpensive or free moorage. However, while community leaders felt having available hotel beds was necessary to attract boaters, almost all the boaters surveyed said they spend every night aboard.

Although some boaters wanted the ICW improved — with better maintenance, dredging and charting — others said they enjoyed the food, culture and sights along the way.

“A group of us has been doing a loop from Norfolk down the Dismal Swamp to Elizabeth City and then to Coinjock and back all over the Thanksgiving holiday for over 10 years,” notes one survey participant. This person adds that trips to Edenton, Manteo, Oriental and Wrighstville Beach are in the works. 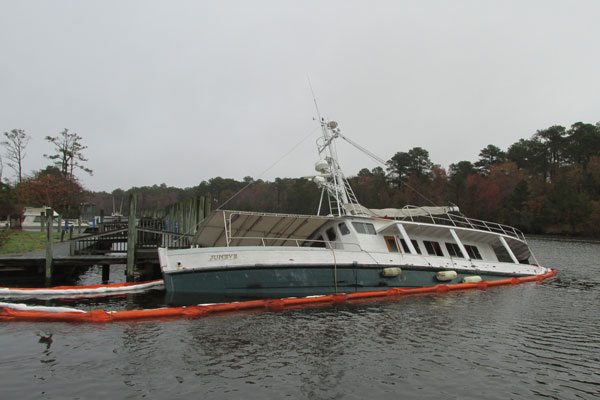 This vessel was headed for repairs in Wanchese when it started taking on water. It stayed at the Midway Marina until the towboat and Coast Guard arrived.

On a personal note, I had first-hand experience of the hospitality of Midway Marina. After some rain-soaked camping misdaventures while conducting my surveys, Terry Miles, the owner of the Midway Marina and Motel, kindly offered me a very comfortable cabin for a special rate. In addition, his wife Sarah and I bonded over pets, after the couple lost their beloved dog Morrie.

Read this post by North Carolina Sea Grant intern Emily White for the results of this study.

Liz Brown-Pickren is a doctoral candidate in the Coastal Resources Management Program at East Carolina University.