The North Carolina Maritime Museum in Beaufort recently opened an exhibit focused on North Carolina’s surfing history. Displays highlight several facets of the sport in our state, providing a glimpse into how surfing evolved along the North Carolina coast. From shaping surfboards to wetsuits and surf wax, non-surfers may even find enough information to interest them in trying the sport.

Some might ask why a maritime museum would cover such an obscure activity. Could that much history related to surfing in North Carolina possibly exist? 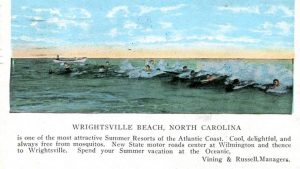 Surfing is without question a maritime activity since the sport plays out on the waves of the sea. The sport only exists in the coastal region of our state because of the maritime environment where waves meet the ever-shifting sands of North Carolina’s barrier islands.

Most people may not realize that the North Carolina coast’s ideal geographic location creates exceptional waves and conditions for surfing. Our state’s beaches receive ocean swells from the north to the southwest, with three major points or capes jutting out into the Atlantic Ocean. The natural curve of the coastline increases the chances that when the surf arrives, you can find a beach where the wind is blowing offshore, grooming the waves to perfection. From strong winter nor’easters to summer and fall hurricanes, rideable waves break along North Carolina beaches throughout the year. 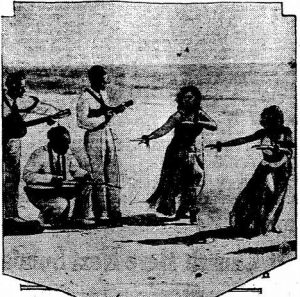 Willie Kaiama and his troupe of Polynesian entertainers gave surfing demonstrations in Dare County in 1928. This promotional photo was taken to promote a similar exhibition at Virginia Beach in 1931, and appeared in the “Charlotte Observer”. Courtesy N.C. Maritime Museum.

Our research shows that folks have surfed here for quite some time, with the sport arriving in North Carolina more than a century ago. Just how far back remains uncertain, but evidence shows people engaging in some form of wave riding along the North Carolina coast by the last decade of the nineteenth century.

But the story is more than just history.

Surfing has grown into a subculture amongst those who ride the waves. When we embarked on uncovering the history of surfing in North Carolina, we also wanted to compile information on the pioneer surfers and surfboard makers in the state and document the influence of the sport on local communities. The end result is Surfing NC: A Timeline of the History of the Sport of Surfing in North Carolina. This living document will continue to record the sport’s history as new material comes to light.

Among the project’s highlights was the group of surfers led by Burke Bridgers, who, in the summer of 1909, tested homemade juniper surfboards at Wrightsville Beach in New Hanover County. Bridgers and fellow area surfers were pioneers of the sport — not just in North Carolina but for the entire country. 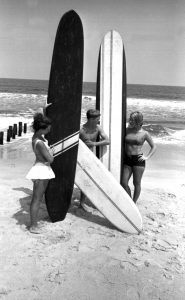 The North Carolina coast encompasses approximately 300 miles of oceanfront beaches where surfing can take place. We set out to find when surfing began at other locations along the coast, and to identify additional adventurous souls experimenting with riding the waves on wooden boards. Some of the Outer Banks surfing pioneers we uncovered include native Hawaiian Willie Kaiama and his troupe of Polynesian performers who put on surfing demonstrations at Virginia Dare Shores for the annual Virginia Dare Day festivities in 1928. The demonstrations may have inspired Dare County native Thomas Fearing to design and build his own hollow-wooden surfboard to use at the local beaches.

With many magazine publications, television shows and films highlighting the sport in the 1960s, surfing experienced a boom in popularity across the country. North Carolina was not immune. Surf shops and surfboard rentals started popping up at Kitty Hawk, Atlantic Beach, Wrightsville Beach, Carolina Beach and Kure Beach. Most boards came from California at the time. Talented craftsmen in the state took the initiative to create their own versions of more modern foam and fiberglass surfboards to ride and, in some cases, sell. Surfboards under the labels Dan-Pri, East Coast Surfboards, Spencer and Surfboards by Don were all custom made in North Carolina. 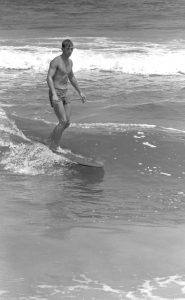 In addition to exploring the history of surfing in North Carolina, the new exhibit — Riding the Right Coast, Surfing N.C. — features information on surfing spots in the state and which waves make for the best surfing, as well as a surf simulator with footage from riding inside the tube, or the covered hollow of a breaking wave. The North Carolina Maritime Museum, 315 Front Street in Beaufort, is open Monday through Friday, 9 a.m. to 5 p.m.; Saturday 10 a.m. to 5 p.m.; and Sunday 1 to 5 p.m. There is no admission fee to the museum; donations are greatly appreciated.

John Hairr and Ben Wunderly are the co-coordinators of the Surfing N.C. Project.

Hairr is museum curator/education branch head at the North Carolina Maritime Museum in Beaufort. He has spent over three decades chronicling the history and traditions of North Carolina.

Wunderly is the associate education curator at the North Carolina Maritime Museum in Beaufort. He has worked nearly 20 years for North Carolina, including stints as a ranger at Hammocks Beach State Park and Jockey’s Ridge State Park.