We’re Not in Kansas Anymore: The Journey of a Coastal Management Fellow

I often hear one of two things when someone finds out I’m from Kansas: either “Hi Dorothy! Do you have a dog named Toto?” or, more reasonably, “How on earth did someone from Kansas end up in coastal management in Maryland?”

Like most memorable journeys, mine has been a mix of hard work and being in the right place at the right time. High school opened my mind to a world beyond Kansas. As an undergraduate student, I explored the world beyond Kansas. Graduate school challenged me to think and work in a state other than Kansas (hint: North Carolina). Kansas is where I always will be from, but the coast is where I always have been going. 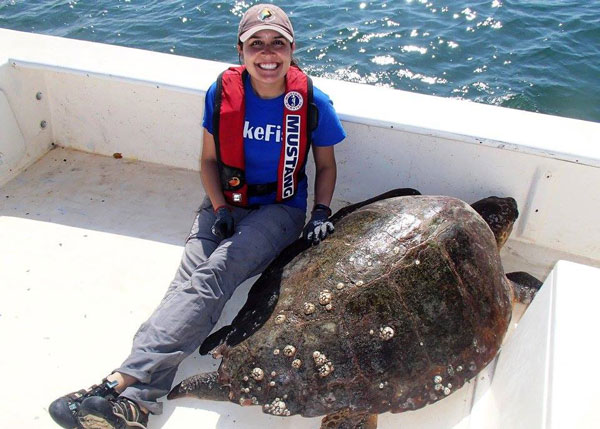 In winter of 2013, I began my second year of the Master of Environmental Management program at Duke University’s Nicholas School of the Environment. During this time, I began to dive deeper into my final master’s project and discovered the Coastal Policy Fellowship offered by North Carolina Sea Grant and the N.C. Coastal Resources Law, Planning and Policy Center. The fellowship encourages research that addresses coastal issues in North Carolina. My topic was timely: Many North Carolina beaches had just been identified as critical habitat for loggerhead sea turtles. Coastal entities were beginning to wonder what that meant to their “business as usual.” I was most interested in how the designation might change how North Carolina communities would apply for, obtain permits for and fund beach nourishment projects.

I worked under two mentors: Lisa Schiavinato, Sea Grant’s coastal law, policy and community development specialist and now Extension Director for California Sea Grant;, and Andy Read, a marine biology researcher and now Director of the Duke University Marine Lab. With their support, I sought to tackle that question. The fellowship enabled me to share the story of the loggerhead sea turtle to a broader audience across the state, and be a voice to encourage long-term beach protection solutions that take into account sea turtles and sea-level rise.

Around the same time, I applied for the two-year National Oceanic and Atmospheric Administration’s Coastal Management Fellowship. I was matched with the Maryland Department of Natural Resources’ Chesapeake and Coastal Service. I graduated from Duke University in May of 2014, moved to Maryland, and started the position in August.

Now, in September 2016, I can’t believe two years has come and gone.

The sheer number of things I have learned about and worked on in the past two years is incredible. Though I readily admit, it wasn’t always the most glamorous work. Some days I stared at the computer for far too long. Some days I struggled through multiday meetings and workshops. Other days I got sweaty, dirty and covered in bugs out in the field. One day, I fell waist-deep into a salt marsh while collecting data on wetlands’ abilities to keep up with sea-level rise. Just the other day, I drafted an entire section of an environmental impact statement. Every day is a new day. 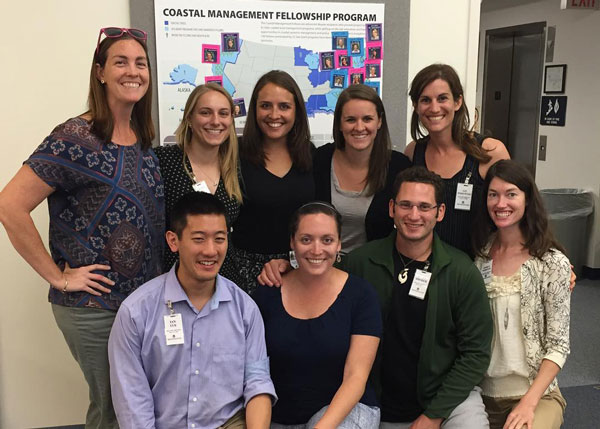 Hernandez (back row, center) joined other 2013 and 2014 NOAA Coastal Management Fellows at a training in Charleston, S.C. Courtesy Kimberly Hernandez

The fellowship also afforded me many opportunities to travel and learn how other states and countries tackle similar coastal management challenges. Thanks to professional development funds offered through the Coastal Management Fellowship, I was able to present my Sea Grant fellowship research at the Restore America’s Estuaries 7th Annual Summit on Coastal and Estuarine Restoration in Washington D.C., and later at the 35th Annual International Symposium on Sea Turtle Biology and Conservation in Dalaman, Turkey. I also was able to network and learn at the 2015 Coastal Geotools Conference and 2016 Social Coast Forum in Charleston, S.C.

Above all, there are two projects I am most proud to be a part of — mainly because I have been working on both since day one of the fellowship. 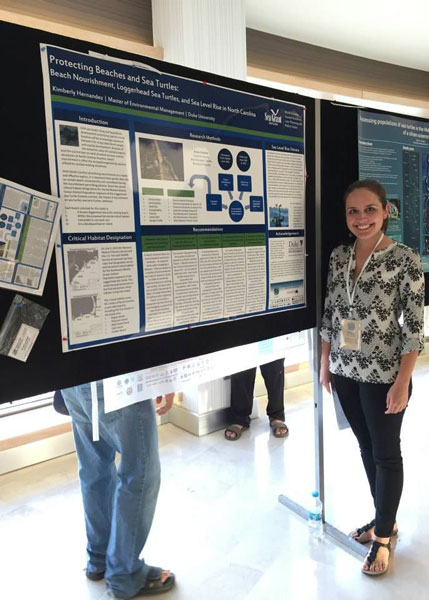 Over the past two years, Hernandez has presented the research from Sea Grant’s Coastal Policy Fellowship at conferences in Washington, D.C. and Dalaman, Turkey. Courtesy Kimberly Hernandez

The first is a massive effort to create and implement the first Mid-Atlantic Regional Ocean Action Plan. Take a moment to appreciate this effort. This plan is on its way to being approved and implemented by eight federal agencies, six states, two tribes and the Mid-Atlantic Fishery Management Council. That’s an incredible number of people, all working together to maintain a healthy ocean and promote sustainable uses of that ocean. I continually am honored that I was able to help shape the plan and work alongside ocean leaders on the Mid-Atlantic Regional Planning Body.

The second is the effort to potentially designate the first national marine sanctuary in the Chesapeake Bay, near Mallows Bay in the Potomac River. I never imagined I would be working so hard to protect nearly 200 shipwrecks in the Potomac River, but this community-based effort has completely shaped my fellowship and future.

I am pleased to say that even though the fellowship has ended, I have been offered a position to stay with the Chesapeake and Coastal Service that allows me to continue to work on all of these projects. When I was matched with Maryland in the spring of 2014, I didn’t know I would be part of so many firsts — the first ocean action plan, or the first sanctuary in the Potomac River. I would not have been able to accomplish any of these without the support of so many amazing mentors, supervisors, teachers and colleagues.

My favorite thing about working in the environmental field is that there is no “I” — we are in this together, and all the work I do is part of a team effort. The biggest lessons I’ve learned throughout the past two years are to embrace what comes my way, to keep learning, and to keep pushing to protect the places we love.

Kimberly Hernandez is a coastal resources planner with the Chesapeake and Coastal Service in the Maryland Department of Natural Resources. Read more about Hernandez’s work as an N.C. Coastal Policy Fellow in her article, Protecting Beaches and Sea Turtles, featured in the Holiday 2014 issue of Coastwatch.

In October, Hernandez will be awarded the 2016 Next Generation Champion of the Chesapeake by the Chesapeake Conservancy for her regional planning efforts and contributions toward designating a national marine sanctuary within the Potomac River.

« So Long, and Thanks For All the Fish*
Building North Carolina’s Resources »