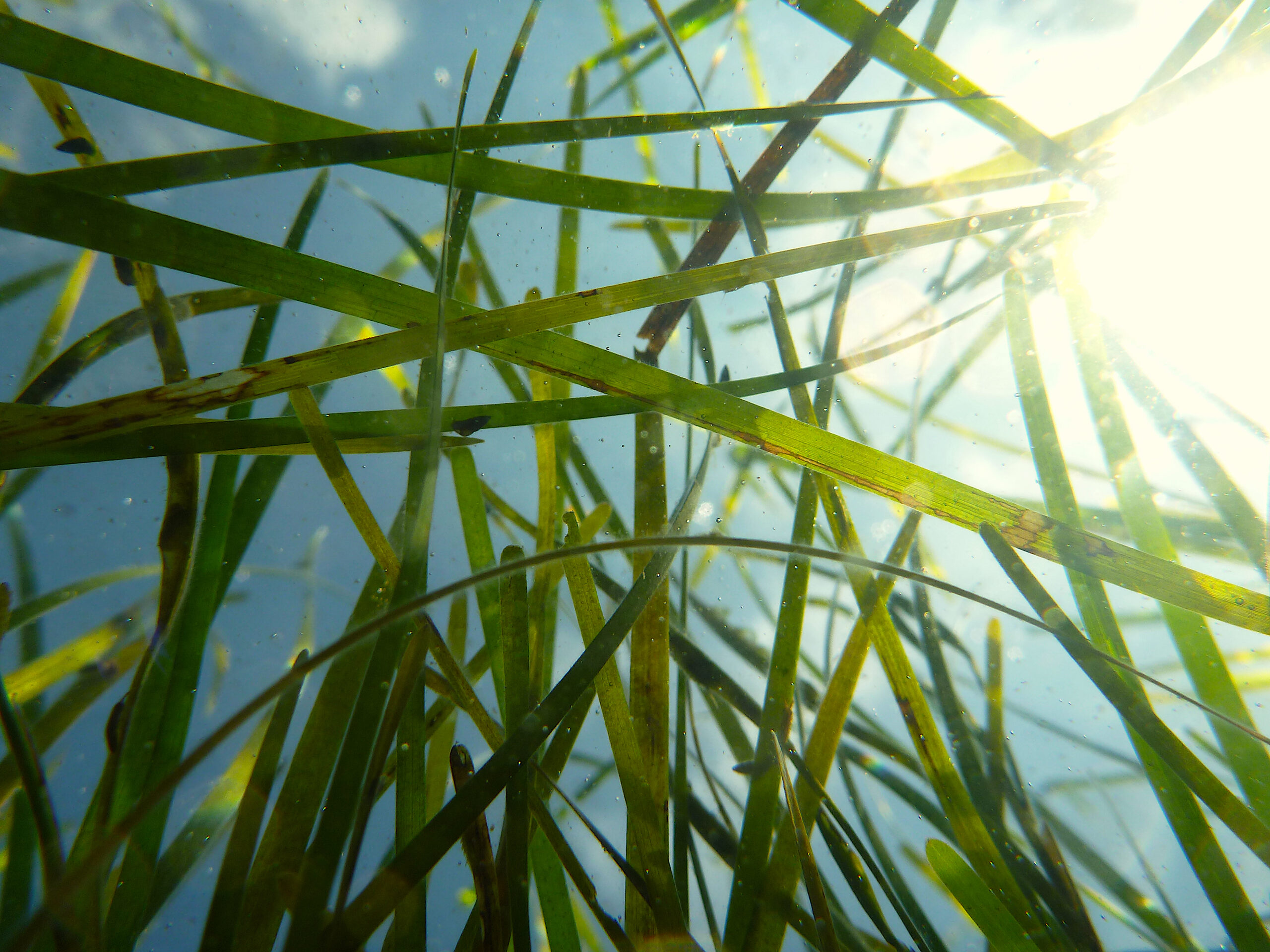 When it comes to grass, Spring is for growing, and that includes grass that grows entirely underwater. A number of species of seagrass have evolved from land plants.

Seagrass ecosystems are facing a global crisis, however, because of human impacts on the coast.

Common eelgrass is the dominant seagrass species in the Northern Hemisphere, where it grows in sheltered bays and estuaries. Eelgrass functions as a shoreline protector, a nursery for juvenile fish and other aquatic organisms, and an oxygen source for marine life.

Eelgrass reproduces asexually through the growth of rhizomes that create large beds or meadows in the wetlands, and sexually by seed germination. Male and female flowers are present on the same plant, but they mature at different times, preventing self-fertilization.

Reproducing both sexually and asexually results in different levels of genetic diversity throughout eelgrass’s range, which, in turn, can influence the ability of the species to withstand environmental disturbances.

The researchers examined two seagrass meadows in southeastern North Carolina to determine the genetic structure and diversity between locations. From about a 100-by-100-foot area, the team collected shoots. Ten years later, they resampled the same areas.

The team used laboratory methods to extract DNA. In addition to gathering genetic data, in a subset of shoot samples the team looked at indicators of the health of seagrass meadows.

In addition, even though the eelgrass at both sites is genetically similar, environmental differences between locations have resulted in different physical characteristics of the eelgrass between sites. The team observed a large amount of variability in the quantities of shoots, roots, and rhizomes. These data suggest an increase in sexual reproduction.

Seagrass meadows in North Carolina are subject to frequent natural disturbances from tropical storms, changes in temperature, and sedimentation. This can favor increased sexual reproduction, which, in turn may lead to greater diversity.

Understanding the genetic structure and diversity of these populations, and how they fluctuate over space and time, will inform the conservation and management of seagrasses in an environment where the effects of climate change are likely to be chronic.

By Sara Mirabilio
Lead photo: eelgrass, shot from the bottom of the bed, courtesy of E. French-E. Shields/VIMS via CC BY-NC-ND 2.0, CreativeCommons.org.

« Do We Understand the Power of Fishing for Food?
Where Can Anglers Find Blue Marlin? »