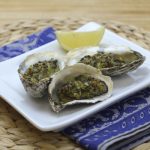 You’ll notice that our recipes tell you to use rock salt in the pan when cooking oysters in their shells. A deep layer allows you to level the oysters in the salt, making them steady and also keeping the contents from spilling out of the uneven shells. Mariner’s Menu shares Broiled Oysters with Fine Herbs. 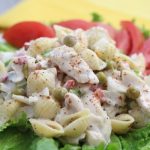 One of the Nutrition Leaders’ first tasks back in the early 1970s was to create healthy, tasty and low-cost dishes with fresh fish flakes. Back then, that meant using mostly canned tuna and salmon. Mariner’s Menu shares a recipe for Fish Flake Macaroni Salad. 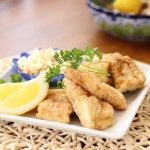 No cooking method except deep-frying results in such a contrast of a crispy outside and tender inside. Just see how much seafood is fried, not only at home, but also in restaurants. Many an eatery has built a lasting reputation on the basis of “Calabash” cooking — the fried seafood named after the Carolina location. Mariner’s Menu shares a recipe for Deep Fried Flounder.

The seafood Mary Dudley Price remembers from her childhood in Tarboro and Raleigh came in cans or was salt-preserved. “Only oysters could be had fresh, and they were ladled out from large tins into quart and pint cardboard containers such as were used later to haul goldfish home from the store,” says Price. Every now and then when her family got hungry for oyster soup, she and her sister, Josephine, would head from their Oakwood home down New Bern Avenue in Raleigh to a little “mom-and-pop” grocery for the fresh, juicy shellfish. 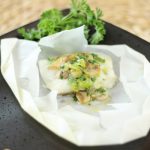 Flounder with Fresh Mushrooms in Parchment