As North Carolina faces critical coastal issues, communities, agencies and researchers are working together. Those partnerships, and new technologies that harness vast datasets, will be highlighted in North Carolina’s Coastal Conference, April 4 and 5, 2017, in Raleigh. 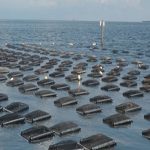 North Carolina Sea Grant has clarified internal deadlines for potential partners to make contact with Sea Grant staff regarding participation in proposals to be submitted for the 2017 National Aquaculture Initiative. 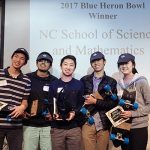 The North Carolina School of Science and Mathematics came out on top at this year’s Blue Heron Bowl. As first place finishers, the team will go on to compete at the 2017 National Ocean Sciences Bowl (NOSB), April 20 to 23 at Oregon State University in Corvallis, Oregon. The competition, a regional qualifying event for the national program, focuses on marine science, with a theme this year of “Blue Energy – Powering the Planet with our Ocean.”