Lesson 4: Zoom in on Aquaculture

1. Describe the life stages of an aquaculture species and recognize its habitat needs and other ecological requirements at each stage.

2. Compare and contrast the ecological needs of species produced through aquaculture.

3. Explain the role of zooplankton and phytoplankton in the food web.

4. Explain the ways that different organisms reproduce can help or hinder their suitability as aquaculture species.

This activity exposes students to North Carolina aquaculture species at multiple scales. First, students will take a big-picture look, exploring a species’ habitat needs and the effects of human activity on its environment. Then they will examine the organism at smaller and smaller scales to better understand the organism’s life cycle and adaptations.

The blue crab (Callinectes sapidus) will serve as a model species, given its important role in marine aquaculture in the state. Indeed, soft-shell blue crabs, along with Eastern oysters (Crassostrea virginica), are the top N.C. marine aquaculture species by volume and by economic value.

Students also will have the opportunity to research other organisms to compare similarities and differences in life stages, habitats, biological needs and aquaculture potential.

Bio.1.2.2
• Analyze how cells grow and reproduce in terms of interphase, mitosis and cytokinesis.

Bio.2.2.2
• Explain how the use, protection and conservation of natural resources by humans impact the environment from one generation to the next.

EEn.2.2.1
• Explain ways to mitigate detrimental human impacts on the lithosphere and maximize sustainable use of natural resources.
• Explain the effects of human activity on shorelines, especially in development and artificial stabilization efforts.

larva: early, immature form of an animal whose development to maturity involves some sort of metamorphosis

plankton: small and microscopic organisms found drifting or floating in the sea or in fresh water, consisting chiefly of diatoms, protozoans, small crustaceans, and the eggs and larval stages of larger animals

megalops: a free-swimming larval stage in the development of a crab that follows the zoea stage; a crab at this stage has large eyes, little claws and legs

molt: loss of plumage, skin, hair, or an old shell as a regular feature of an animal’s life cycle

recirculating aquaculture system: tanks used to raise aquatic organisms in which the water in the system is treated and reused through biological and mechanical filtration

taxonomy: orderly classification of plants and animals according to their presumed natural relationships

zoea: a crustacean’s first larval form after hatching from its egg; a small, transparent organism that swims at, or near, the surface of the sea

zooplankton: plankton consisting of small animals and the immature stages of larger animals

Blue crabs are crustaceans, meaning that adult crabs have hard shells and jointed legs. It takes 12 to 18 months for crabs to fully mature. They develop through several stages until they reach the adult shape many of us recognize.

The blue crab starts its life as a microscopic larva called a zoea that drifts through the water eating zooplankton and plant materials. This period lasts 30 to 45 days.

Eventually the blue crab reaches the megalops stage, when it grows a soft exoskeleton and starts to look more crab-like. It sheds that skin after six to 20 days. At that point it is a juvenile crab that look like a miniature version of an adult crab.

In order for a mature crab to grow, it periodically sheds its hard shell through a process called molting. A soft, pliable crab emerges and expands its soft, new shell. A crab that has just shed its hard shell is known as a soft-shell crab, and is a common aquaculture product in North Carolina. Soft-shell crab producers must monitor blue crabs closely in order to harvest them directly after molting. Within only a few hours of shedding its shell, the crab will again return to its hardened state.

Soft-shell crab production is a type of short-term farming, because it consists of removing crabs from the wild and holding them until they molt. Soft-shell crabs can be produced in indoor or outdoor recirculating aquaculture systems, such as the shallow tanks depicted in the following illustration. These shedding tanks are simple troughs or shallow tables that hold running water that is pumped from a brackish water supply. Water filtration maintains proper water quality. Molting crabs are separated by mesh enclosures to protect them during this vulnerable life stage. 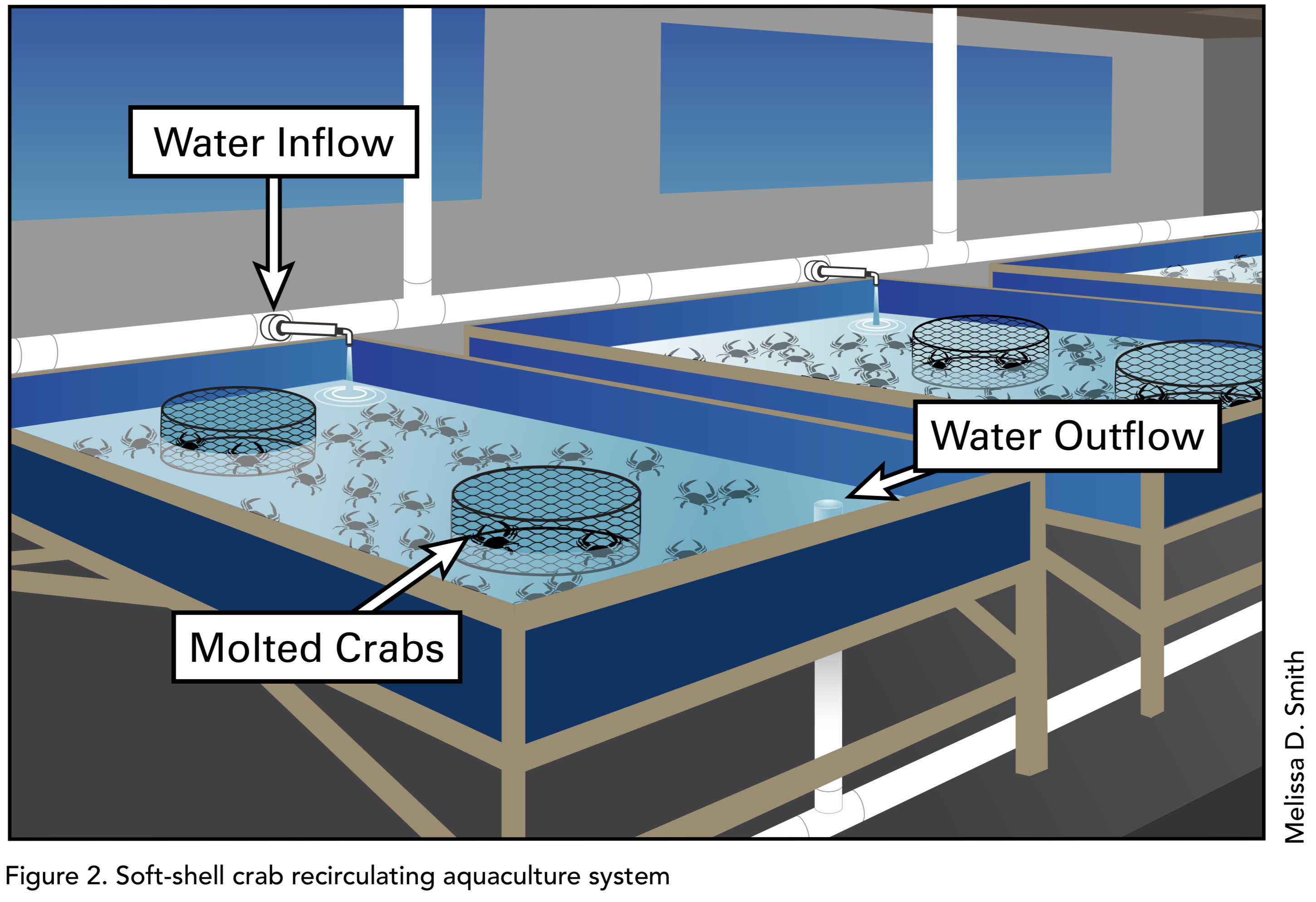 Blue crabs are part of a complex food web and have evolved numerous adaptations to find food and avoid being eaten. They are omnivores and opportunists in their eating habits. They eat both plants and animals, including bivalves like soft-shell clams; other crustaceans, such as shrimp; fish and marine worms; and anything else they can find, including dead plants and animals. They even eat younger blue crabs!

In turn, many organisms eat blue crabs. Eel, drum, spot, striped bass (rockfish), Atlantic croaker and catfish all eat crabs when they are in the zoea and megalops stages. Some sharks and cownose rays eat the larger adult crabs, as do Kemp’s ridley sea turtles. Humans also eat blue crabs. In fact, blue crabs are the number-one seafood harvested in North Carolina by volume and monetary value. Fishers deploy crab pots, typically from a boat, to catch crabs.

Blue crabs have a number of other adaptations that make them successful in the marine environment. For example, females produce a large number of eggs — as many as 750,000 to 8 million at a time. This reproductive strategy ensures that at least some eggs will survive, even if others are eaten.

Like many other arthropods — a phylum that also includes insects and spiders — blue crabs can regenerate a lost appendage through molting. They can grow a new full-sized leg or claw after two to three molts.

1. The teacher will show students, without much explanation, the Zoom In PowerPoint presentation. At each slide, the teacher will ask the students what they see. As the slides progress to show smaller scales, the teacher can discuss food webs, as well as adaptations that the crabs have evolved in order to eat and avoid being eaten.

The teacher will then facilitate a discussion on:

Students will present their PowerPoint or booklet to another student and explain what they learned about the species, including its taxonomy, biotic and abiotic requirements, life cycle and suitability for aquaculture. Together, the student pairs should create a list of similarities and differences between one of their chosen species and the blue crab.

Next, the teacher will facilitate a group discussion about the similarity and difference lists. Are any of the similarities or differences related to species taxonomy, for example? Which species are of the same phylum, class, order, or family? The teacher also will ask students to describe which characteristics of their organism could hinder its use in aquaculture, and which characteristics are conducive to aquaculture.

Each student will explain the findings about their aquaculture species to an adult — for example, another teacher, parent or adult friend — and have the adult sign off that the student completed the assignment.