1. Identify the ecosystem benefits that shellfish contribute, especially the effects on nearshore benthos.

2. Explain how oysters are grown with aquaculture methods.

Shellfish are bivalve mollusks that provide critical habitat for many finfish and other marine organisms. They also help anchor numerous food webs, as larvae and adults alike. In this lesson, students will learn about the ecosystem benefits of shellfish and the role that shellfish aquaculture plays in reducing harvest pressure on wild stocks. The lesson will focus primarily on the Eastern oyster (Crassostrea virginica), which is the most commonly grown shellfish species in North Carolina.

EEn.2.8.2
• Critique conventional and sustainable agriculture and aquaculture practices in terms of their environmental impacts.

Bio.2.2.2
• Explain how the use, protection and conservation of natural resources by humans impact the environment from one generation to the next.

benthos: flora and fauna found on the bottom, or in the bottom sediments, of a sea, lake or other water body; these organisms are usually scavengers or feed on dead organic material

carbon sequestration: process of removing carbon from the atmosphere and depositing it in a reservoir

ecosystem services: benefits, such as pollination and decomposition, that humans gain from properly functioning ecosystems

estuary: partially enclosed coastal body of brackish water with one or more freshwater rivers or streams flowing into it, and a connection to the open sea

growout: final stage of aquaculture production in which a species is raised for harvest

hatchery: facility for the propagation of the early life stages of aquaculture species, including seed production

monoculture: cultivation of a single crop, or the maintenance of a single kind of animal, to the exclusion of others

nursery: stage of species cultivation between the hatchery and the growout phase; this operation is designed to rapidly grow small seed at low cost to a size suitable for transfer to growout trays, bags or nets

seed oyster: a juvenile oyster, or a mature one ready to spawn, especially as used to stock a commercial oyster bed

sustainable: describes activities in which environmental degradation is minimized, especially by avoiding the long-term depletion of natural resources

Along the coast and in streams, oysters filled North Carolina’s waters long before Europeans arrived in the 16th century. These filter feeders sustained coastal economies, acted as natural cleanup crews and served as symbols for the coastal way of life for generations.

As the United States rebuilt after the Civil War, many families on the East Coast turned to oyster harvesting for both food and money. By the 1880s, the oyster beds of Maryland and Virginia were almost completely decimated due to destructive harvest practices that relied on iron dredging. Fishers then looked farther south to the oysters of North Carolina.

Intense competition to harvest the state’s oysters led to an increase in armed pirates patrolling the waters. In 1891, North Carolina declared an “Oyster War” on these pirates and prohibited fishers from selling their harvest outside North Carolina, forcing pirates and northern fishers out of the market.

Despite the anti-piracy laws, continued harvest pressure, habitat loss, pollution and diseases have caused oyster harvest within the state to decline to about 15 to 20% of historic harvest levels. Some regions are slowly rebounding, though, with the help of oyster reef restoration.

Students will watch several videos on oyster biology and aquaculture and answer questions found at the end of this lesson.

Teachers can choose which videos to assign based on topical interest. Students should share what they’ve learned from the videos in small groups or in a class discussion.

Students will learn about the history and life cycle of oyster reefs. 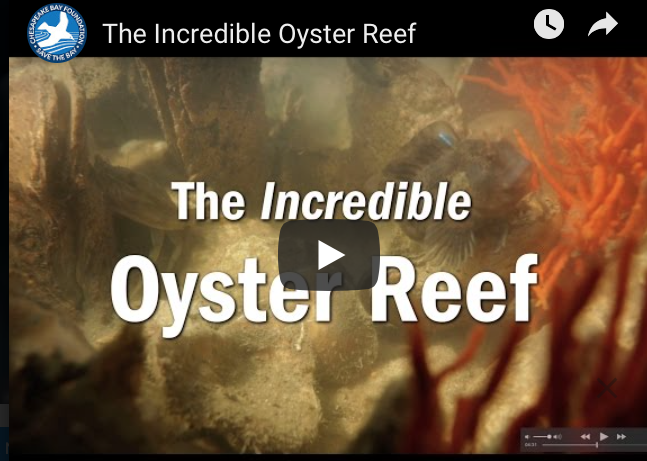 1. How are oyster reefs built? Oyster larvae settle onto other oysters and create a reef

4. Do all organisms on oyster reefs live their entire lives there? If not, which stage of life do some species spend on oyster reefs? No, juvenile croakers spend the early part of their life on the reef, and then come back as adults.

5. What do oysters eat? Algae/phytoplankton

6. What has happened to oyster reefs since European colonists arrived? Waters polluted with excess nutrients now grow too much algae, which deplete oxygen — which oysters need — when they die and decay; loss of forest land and poor erosion control leave oyster beds silted over and oyster larvae with no place to set; oysters were overharvested. 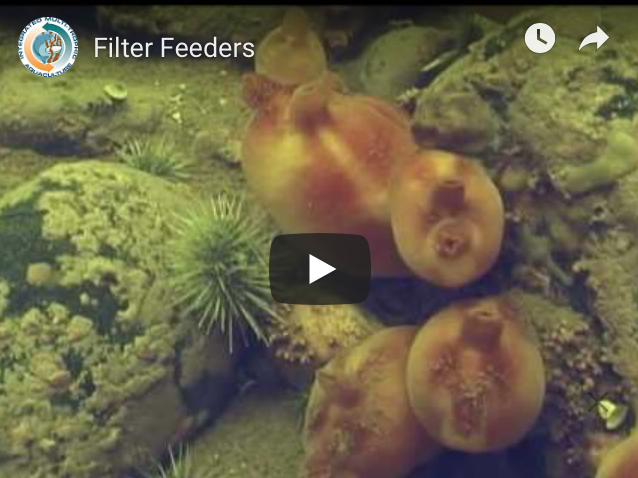 4. Why are filter feeders key organisms in marine ecosystems? Filter feeders play a major role in energy cycling; they couple production of pelagic and benthic realms.

5. How did overharvesting of oysters adversely impact the environment of Chesapeake Bay? Phytoplankton increased, leading to oxygen depletion, and many species disappeared.

Ever wonder where the oyster on your plate came from? Most are produced through marine aquaculture. Students will find out how in this comprehensive video. 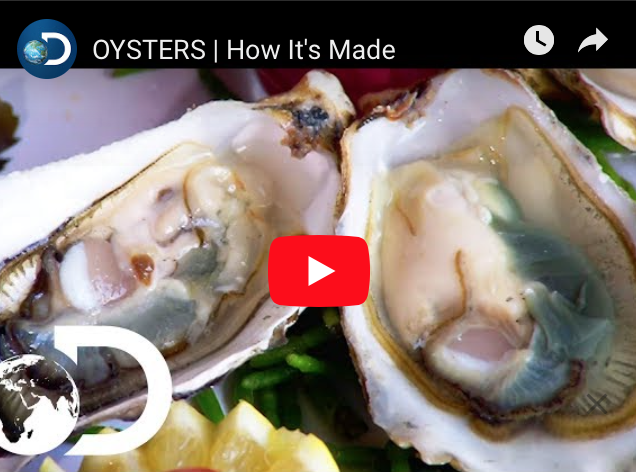 1. How much water can an adult oyster filter per hour? More than 5 quarts per hour

2. How do breeders get the oysters to release sperm and eggs? Stimulate spawning by oscillating the water temperature between 68°F and 86°F

3. How are oysters fed in the nursery and hatchery? A mix of phytoplankton is diluted with sea water and pumped into the oysters’ containers

4. How big are the oysters when they are transferred to the farm? At a fraction of an inch long, they are put into upwellers on the farm.

Students will explore a new method of growing oysters, which uses cages that float on the surface of the water. See how they are used on an oyster farm on Cedar Island, on the North Carolina coast. 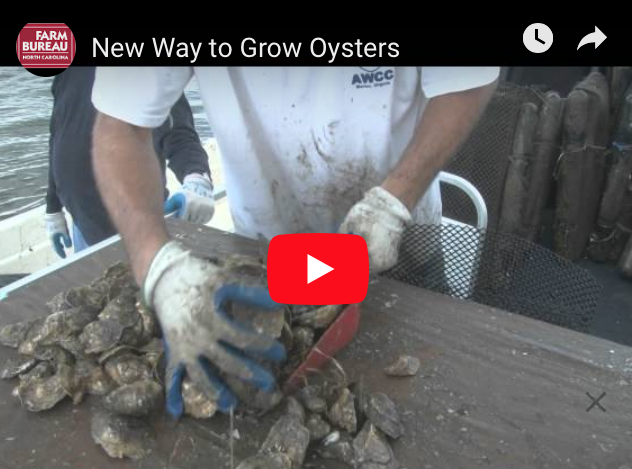 1. Why does the oyster farmer use floating oyster cages? Wind and wave action keep oysters tumbled (resulting in better-shaped shells); allows them to be in higher temperatures and higher water quality; more food is available in the water column.

3. Describe the process of culling oysters. Why do farmers do this? Every three to four months, take the oysters out of the cages and pick out the largest (and the doubles/triples) to go to market; everything else goes back into the cages. This process thins out the floating cages, making them lighter.

4. How big is the oyster seed when sourced from the hatchery? 4 to 6 mm

5. Once the seed has been planted in the water, how long does it take an oyster to grow to a harvestable size? 11 months (fast growers); 16 months (majority); 24 months (the rest of the marketable oysters from that age class, or hatchery group)

6. Where, or to whom, do oyster farmers sell their product? Restaurants, raw bars, individuals (for oyster roasts), fish markets, community-supported fishery (Triangle area) 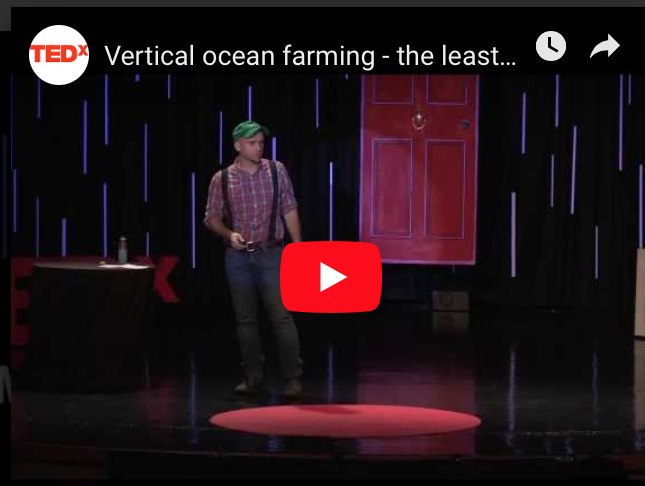 1. What are the speaker’s concerns about commercial fishing? Destroys ecosystems, bycatch

2. What was the speaker’s first example of a fisheries “crash”? East Coast cod population crash

3. What are his concerns about farming fish? Antibiotics, polluting local waterways, mislabeling

5. What is the speaker doing now? How is he a “green” fisherman? He grows shellfish and seaweeds for local food, organic fertilizer and biofuel.

6. What is kelp? A type of seaweed that is the second fastest-growing plant in world

7. How does the speaker produce kelp and other products with aquaculture? Farm system is anchored to the sea floor with buoys on the surface. Kelp grows on floating lines vertically into the water column. Mussels and scallops hang on same gear that kelp does. Oysters and clams are grown in cages that sit on the sea floor under the other products.

8. What does the speaker mean by “small footprint aquaculture”? Use of full water column for growing more than one species, as opposed to a monoculture (one species)

9. How can humans consume omega-3s without eating fish? Eat what fish eat

10. How does vertical ocean farming protect the coastline from severe weather hazards like hurricanes? Storm surge protector, or buffer

11. What are two ways that kelp makes the speaker a climate farmer? Kelp soaks up, or sequesters, 5 times more carbon than land plants; kelp is also used for biofuel, which can replace need for oil

1. The oyster has a relatively simple morphology, anatomy and ecological niche. In this exercise, students will learn about the external and internal anatomy of the Eastern oyster. https://www.mdseagrant.org/interactive_lessons/oysters/anatlab/index.htm

2. In this exercise, students will learn how filter feeders like oysters trap particulates in their gills and then transport materials to the mouth for sorting and/or consumption. https://www.mdseagrant.org/interactive_lessons/oysters/oysfilt.htm