Sentinels of the Centennial

Story and Images by Michael Flynn

Posted June 30, 2016
Summer is officially here. If you are still making summer plans, mark your calendars for Aug. 25 and celebrate the centennial of the National Park Service, or NPS. North Carolina boasts 10 national parks. But you do not have to wait until August to find your park and celebrate because July is Parks and Recreation Month.

In fact, one park already has the candles lit — three giant candles so big you need many stairs to get to the top. These candles, also known as the Sentinels of the Sea, are found on Cape Hatteras National Seashore, where the land meets the sea. 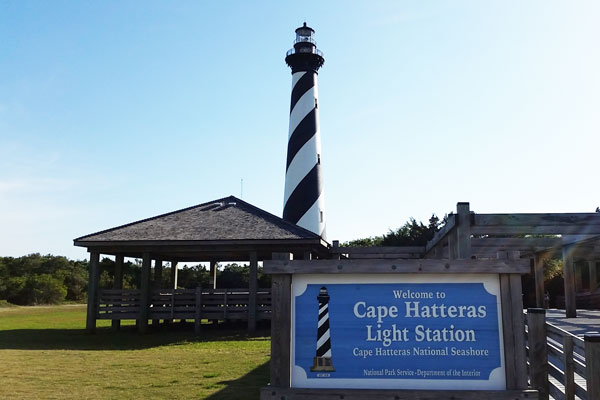 The Cape Hatteras Lighthouse on the central coast, Bodie Island Lighthouse to the north and Ocracoke Lighthouse to the south served as the primary aids to navigation during the 19th century and much of the 20th century before the advent of depth sounders and Global Positioning Systems. The lighthouses warned mariners of the hazardous shoals lying off the coast of Cape Hatteras and guided them to safe harbor through Oregon and Ocracoke inlets.

Although 21st-century sailors do not rely on these beacons with the same dependence as those of the past, the lighthouses still serve as active navigation aids. They also draw millions of visitors to our country’s first National Seashore each year.

The Cape Hatteras National Seashore, located along the Outer Banks, was established in 1937 to preserve cultural and natural resources of national significance. It is “a place to engage your senses,” says the seashore’s homepage. “Shaped by the forces of water, wind, and storms these islands are ever changing. The plants, wildlife, and people who live here adapt continually.”

Structures erected on dynamic barrier islands often do not have the same luxury of mobility. These islands’ shifting shorelines are predominately shaped by erosion, frequently experience flooding from storm surge caused by tropical and other storm events (e.g., nor’easters), and are highly vulnerable to sea-level rise.

You may recall efforts in 1999 to relocate the Cape Hatteras Light Station to its current location: 2,900 feet landward from where it was originally constructed and had been operating since 1870.

The NPS recognized the vulnerability of historic structures located within the seashore and sought to assess the park’s vulnerability to coastal hazards to assist park managers with long-term planning. It formed a cooperative agreement with East Carolina University to conduct this study.

My advisor, Dr. Tom Allen, is one of the principal investigators, which is how I found myself visiting these parks in the spring. Using GIS, I evaluated the susceptibility of historical structures located within the seashore to erosion, storm surge and sea-level rise.

My 2016 N.C. Coastal Resources Law, Planning and Policy Center fellowship enabled me to extend this study to examine the susceptibility of individual buildings located within the eight unincorporated communities along the Cape Hatteras Seashore to coastal hazards.

Natural processes change the shape and form of the barrier islands in the national seashore, which influences the plants and animals that inhabit them. These same natural processes also affect how people settled on and developed the sandy shores of the Outer Banks over the past century. When these natural processes interfere with or disrupt people’s use of the natural environment, or even destroy the human-built environment, they become natural hazards. 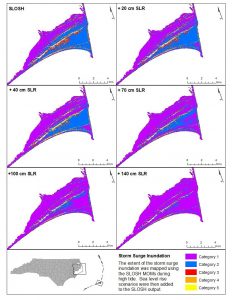 The map depicts the extent of storm-surge inundation from hurricanes of different strengths that occur during high tide. The model uses a method regarded by the National Hurricane Center as the best approach for determining storm-surge vulnerability. Using worst-case scenarios is generally accepted as a best-management practice for mitigation planning. Click picture for larger image.

For the NPS, I developed maps that illustrate how potential storm-surge inundation along the seashore, caused by increasingly powerful hurricanes, would be compounded by sea-level rise. The maps identify which landmarks and areas within the seashore are vulnerable to storm surge.

The maps are developed using the most recent data and methods available — Light Detection and Ranging (LiDAR) data from the U.S. Geological Survey for the North Carolina Flood Plain Management Program; storm surge inundation data from the Sea, Lake, and Overland Surges from Hurricanes (SLOSH) model developed by the National Weather Service; and the National Oceanic and Atmospheric Administration Coastal Inundation Mapping methodology.

I am still developing the final report for the NPS. The ECU/NPS study will provide park managers with vulnerability assessments for each structure, as well as estimated timelines and probabilities for potential impacts. The managers could use the information to identify mitigation measures that might reduce the vulnerability of a particular structure, as well as when the mitigation measure will need to be included in a future budget.

The U.S. Weather Bureau Station in Hatteras is another attraction included in the vulnerability assessment for the NPS. The station operated from 1902 to 1946, providing residents and other weather stations with forecasts and news of approaching storms. I think of the lighthouses and the weather station as the unofficial mascots of my research project. The objective of this research parallels the historical mission of those landmarks: providing a warning of approaching hazards. 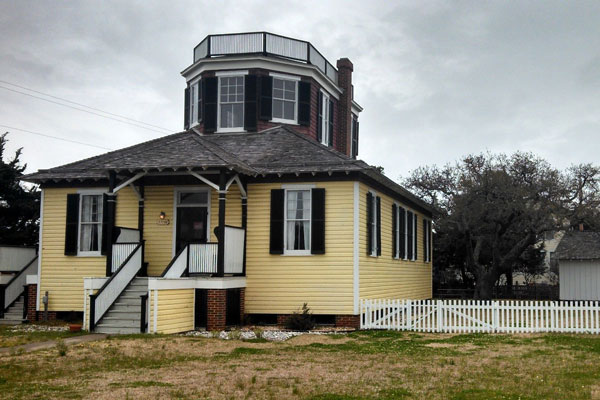 The cooperative agreement to perform the vulnerability assessment supports the NPS mission to preserve “unimpaired the natural and cultural resources and values of the National Park System for the enjoyment, education, and inspiration of this and future generations.”

The information and stories associated with these historical and cultural landmarks provide researchers with valuable insights to the past, assessments for the present, and plans for the future so that we can celebrate the Cape Hatteras National Seashore centennial in about two decades.

Don’t take my word for it though. Find out for yourself and plan to visit the national treasure that is the Cape Hatteras National Seashore. Be sure to shout out, “Happy 100th birthday!” to the NPS from the top of one of the three candles.

« Sharing Perspectives on Community Adaptations
Fun in the Sun »