Happy Independence Day to you and yours!

Rather than celebrating with a party this month, we instead offer you a trip — down memory lane. In 2001, we outlined a history of the program via a story in Coastwatch magazine. We draw from that story here and will share other memories in the coming weeks and months. 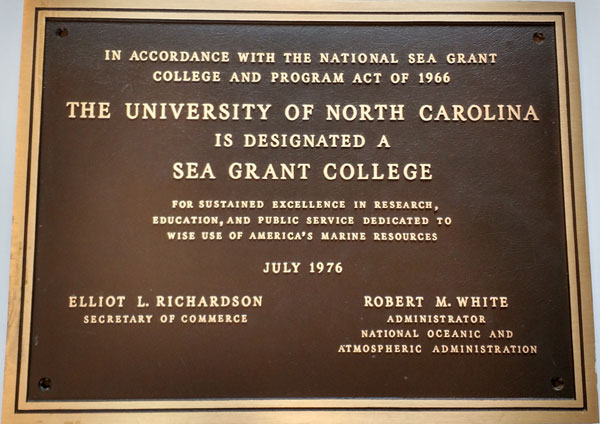 “To be accepted, Sea Grant would have to be relevant. We would have to deliver good information and do it when we said we would,” recalls B.J. Copeland, former director.

As the Sea Grant program grew, extension staff and researchers would stay on the lookout for new topics and issues, especially as sleepy fishing villages became tourist meccas, and as inland development surged in river basins that drain to the estuaries.

“Sea Grant provides a direct — and personal — link between the universities and the coastal communities,” adds Ronald G. Hodson, who succeeded Copeland as director.

“We have earned a reputation for being available to listen to coastal concerns and being alert to scientific and technological breakthroughs that could be potential solutions,” Hodson notes in the 2001 story — a sentiment that we think holds today. With the support of U.S. Rep. Alton Lennon from Wilmington, who chaired the House Merchant Marine and Fisheries Committee, the bill moved quickly. In less than a year, President Lyndon Johnson signed the National Sea Grant College and Program Act of 1966.

“In truth, if Sea Grant wasn’t invented in 1966, someone would invent it today. People depend on Sea Grant for good information and to help them survive,” Copeland says. “You can’t argue with priorities when they are to improve the quality of life and enhance economic opportunities. That’s what Sea Grant is all about.”

The national program — which focused on the coastal states, as well as the Great Lakes — awarded its first research grants in 1968. They included groundbreaking studies in ecology by University of North Carolina at Chapel Hill researcher Howard T. Odum.

At the same time, North Carolina officials had begun to focus on marine sciences as well. One of the last actions of Gov. Dan Moore was to create the N.C. Marine Science Council and a university-level marine science program coordinated by John Lyman at UNC-Chapel Hill. To solve the problem, the new governor, Bob Scott, took on dual roles — mediator and breakfast chef — in the winter of 1969. He invited representatives of the four universities, as well as state officials, to an early morning meeting at the Governor’s Mansion. The special guest was Bob Abel, the first National Sea Grant director.

“Part of our strategy was: Let’s do something for the state of North Carolina. Let’s forget about one institution,” Walton Jones recalls in the 2001 story. His marine science work included time as a top advisor to Gov. Moore, vice chancellor at NC State, and as vice president of research and public service for the UNC system. “We put the needs of the state ahead of any institution.”

Others attending the meeting included Lyman, Leigh Hammond who worked in the governor’s office and later served in NC State administration and led Sea Grant advisory services in North Carolina, C.Q. Brown from East Carolina, and Bruce Muga from Duke.

Strong support also came from Wayne Corpening, a former N.C. secretary of administration and mayor of Winston-Salem; and Addison Hewlitt, a former N.C. House speaker who served as the first chairman of the Marine Science Council.

Sea Grant’s on the Map Their efforts were successful. In 1970, North Carolina was granted a Sea Grant institutional program that worked with the various universities and was administered by Lyman’s office in Chapel Hill.

Copeland — whose first North Carolina Sea Grant research was a project with NC State colleague John Hobbie that looked at nutrients in the Pamlico estuary — was named program director in 1973. That meant the state’s Sea Grant headquarters moved to Raleigh.

His goal? Full Sea Grant College Program designation — based on a record of excellence in research, extension and communication — in the minimum time, just three years.

Copeland recalls July 1, 1973, when his staff included only Rickards, who later became director of the Virginia Sea Grant program, and Louise Bame as secretary. “I was told to write a proposal and submit it by Aug. 1. We had no extension advisors and no communicators. So we set about getting the word out that we were in business,” Copeland says.

Look for future posts on our early research and outreach efforts.