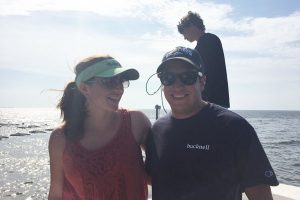 This summer, I am studying the regulations governing oyster aquaculture in North Carolina. My task is to identify requirements to obtain a shellfish aquaculture lease in this state that potentially could be streamlined and standardized based upon the practices in other mid-Atlantic and southern states.

A few weeks ago, I visited local oyster growers to weigh their perspectives on the challenges they face in establishing and expanding their aquaculture businesses.

I traveled with Jane Harrison, North Carolina Sea Grant coastal economics specialist, to Hatteras and Ocracoke islands, both on North Carolina’s Outer Banks. Along with Jane’s colleagues Chuck Weirich, marine aquaculture specialist, and Barry Nash, seafood technology and marketing specialist, we met three growers who are at different stages of scale and production for their operations.

Bill Belter and his son Ryan own Cape Hatteras Oyster Company in Buxton. The Belters started their oyster operation in October 2014 and already have seen success in the wholesale half-shell market. During our meeting, they took us out on their boat to see their lease in the Pamlico Sound.

The Belters showed us an impressive area of floating grow-out bags that are color coordinated to indicate the level of growth and maturity of the oysters inside. They explained how they rotate the bags and separate larger oysters to facilitate ideal growth conditions. 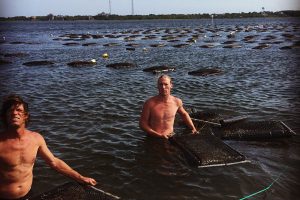 Bill and Ryan Belter own a Cape Hatteras Oyster Company in Buxton. Photo by Jane Harrison

Bill pointed out areas they would like to add to their lease. He also discussed a huge endeavor for their company: a proposal for a new hatchery so they can produce their own oyster seed.

Back on land, we met Bryan Dunn, co-founder of Rare Edibles, a wholesale distributor who works with Cape Hatteras Oyster Company. Based in Dallas, Texas, Dunn supplies high-quality food products to specialty markets and restaurants throughout the southeast.

Dunn gets the highest prices for the Belters’ oysters by selling straight to five-star restaurants. This strategy has enabled the Belters to expand their markets rapidly, selling more than ten thousand oysters per week. Cape Hatteras Oysters now are available in Atlanta, Nashville and Dallas.

Next, we met with Hatteras native Spurgeon Stowe and his wife, Katherine McGlade, at Oden’s Dock in Hatteras. They are in the charter boat industry, running pirate-themed and other cruises. McGlade sees aquaculture as a way to supplement the couple’s income beyond the existing tourism economy, which is popular in the summer. 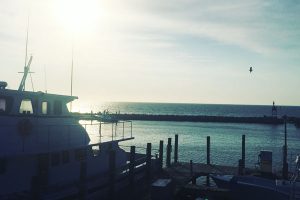 My work on shellfish aquaculture regulations in North Carolina took me to Oden’s Dock on the Outer Banks. Photo by Palmer Hilton

They are just starting their oyster operation, King’s Point Oyster LLC, and McGlade notes that getting an oyster lease can be time-consuming. Each application requires careful site selection and a survey of the location conducted by the state. She had been denied on multiple occasions due to the presence of submerged aquatic vegetation, or SAV, forcing her to start the process over each time.

The process raised some questions in McGlade’s mind about the effects of oyster leases on areas with SAV. She is conducting preliminary research on this topic as part of a team that received North Carolina Sea Grant funding to study estuarine habitats, led by Joel Fodrie at the University of North Carolina at Chapel Hill’s Institute of Marine Sciences.

The last grower we met was Arleen Burley, who also goes by the name of Clam Lady Jane. Burley, located in Ocracoke, is an experienced clam grower transitioning to oyster aquaculture because she can produce a harvestable product much faster. After Hurricane Arthur wiped out her clam harvest in 2014, she began to grow oysters, which reach market size much sooner than the four years required for clams.

What’s next for this project? Soon, I will meet with a panel of regulators, business representatives and members of the N.C. Coastal Federation at NC State University’s Center for Marine Sciences and Technology in Morehead City. We will discuss regulatory hurdles and opportunities facing North Carolina’s aquaculture industry.

Palmer Hilton is a research law fellow with the N.C. Coastal Resources Law, Planning and Policy Center. He is a second-year law student at the University of North Carolina School of Law, with an interest in water rights law and policy, and their application to coastal issues.