Mercury on the Rise

As sea levels continue to rise with each passing year, researchers focus their attention on how coastal wetlands may be impacted by the change. While there is an abundance of research on the impacts of sea level rise on various factors of the coast, few studies have addressed how rising sea levels may affect mercury deposits in the coastal region.

One researcher tackling the question of mercury’s impacts on freshwater coastal wetlands is Yener Ulus, a 4th year Ph.D. student in Environmental Health Sciences at University of North Carolina at Greensboro (UNCG). Using his joint North Carolina Sea Grant – Water Resources Research Institute (WRRI) graduate research fellowship award, he formulates his questions to investigate how mercury changes from its inorganic form, which is less likely to transfer into animals or people, to a more toxic methylated form, when saltwater begins invading freshwater wetlands.

“We already know there is mercury pollution,” Ulus states. “But, we don’t know what this perturbation would look like with sea level rise, hurricanes, storm surges and floods.”

Mercury is present in almost every waterbody and is one of the most common pollutants in North Carolina’s freshwater fish. It has the potential to threaten the health of people consuming those fish. However, the form of mercury dictates the level of threat that this pollutant poses for human and ecosystem health. As saltwater invades freshwater wetlands, it can carry abundant sulfate into these systems, which sets off a chain reaction in the wetland.

“There is sulfate-reducing bacteria that uses the sulfate,” Ulus explains. “As a byproduct it converts inorganic mercury into organic mercury – which we call methylmercury, the most toxic form. This methylmercury is in the water, sediment, the plankton, small insects, fish and eventually humans who eat the fish.” 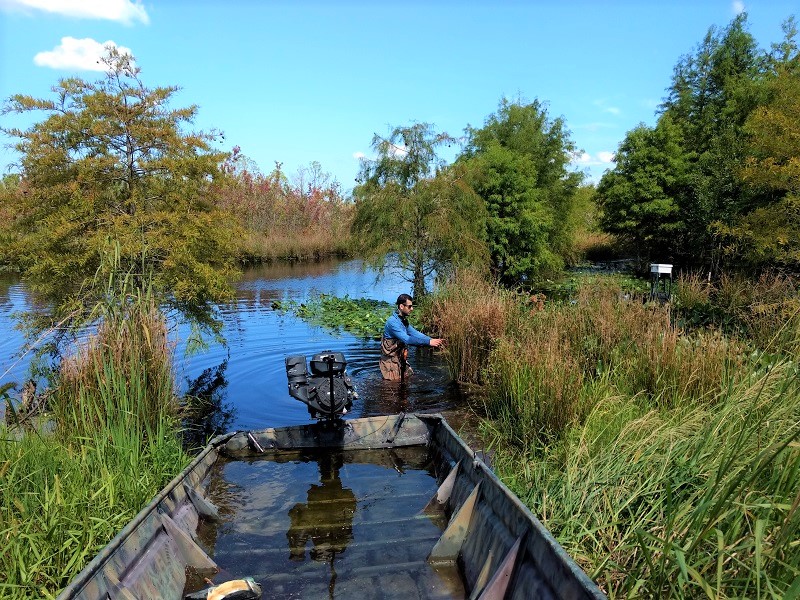 Yener Ulus, a UNC Greensboro Ph.D. student, takes samples from one of his field sites. 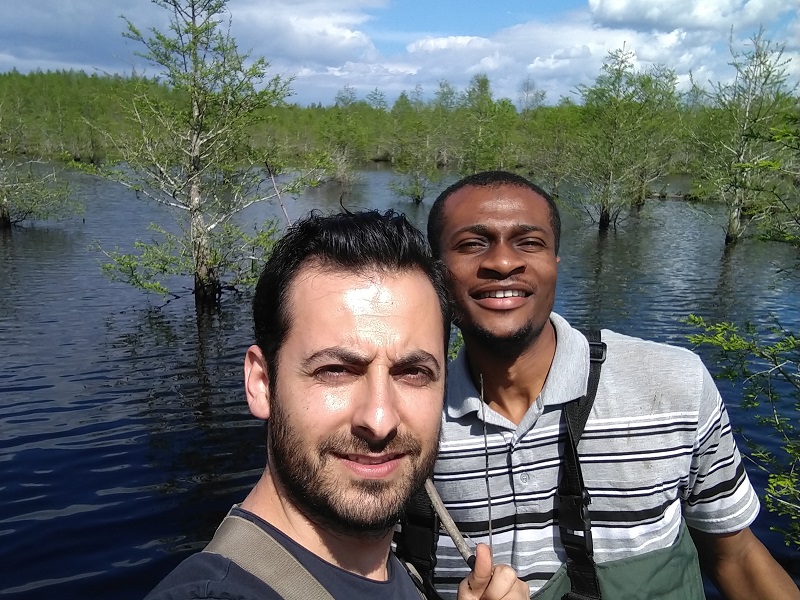 Ulus and his colleague prepare to work in the field.

When he gathers samples to study, Ulus must drive five hours with his crew from Greensboro to his wetland study sites in Dare and Tyrrell Counties. He dedicates up to five hours to collecting sediment, water and biota samples, then makes the five-hour drive back to his lab. Ulus does not hesitate to make the long trip even in the toughest weather situations. When Hurricane Dorian made its way to North Carolina’s coasts, he visited his sites for samples prior to the storm surge, even while the local towns were evacuating.

“The results are amazing,” Ulus says. “One week after the hurricane passed, we went back to collect samples. So, basically that gave me a chance to see how methylmercury will vary when you have excessive amounts of sea water intrusion from storm surge.” With the collected samples, Ulus and his crew managed to observe there was, indeed, an increase in methylmercury production.

Growing up in Arsuz, Turkey, a small green town near the Mediterranean Sea that relies on fishing and farming, Ulus understands the value of nature and realizes that it must be protected. Ulus states, “I wanted to be the person who saves the environment while also being a good influence to those around me”. This mentality is driving Ulus’ passion for his Ph.D. work and is motivating him to extend his findings outside of his lab.

Ulus extends his research outside of his lab and field site to make sure citizens are aware of mercury pollution in coastal areas. As a volunteer with UNCG’s Science Everywhere program, he teaches students from kindergarten up to high school about mercury as a pollutant.

In Tyrrell County, one of the poorest counties in North Carolina and the location of one of Ulus’ sites, Ulus finds that “many people actually don’t know about mercury…. So, one of my purposes is to explain what’s going on in their own community about mercury pollution, because most of them have no idea about that.” He has been in contact with the town manager at Columbia, N.C. to speak with the mayor about mercury and his research to help communities in the area understand mercury pollution in general.

Outside of the U.S., Ulus presented his research to experts in his field at the 14th International Conference on Mercury as a Global Pollutant in Poland. He even presented and discussed his research with government representatives and communities in his home country, Turkey.

While protecting human health is important, Ulus emphasizes that we have special areas in North Carolina that we should protect to preserve the wildlife and natural beauty.

“We should provide a good environment for any wildlife — for anything as a whole.” Ulus says, “We should not just think about ourselves. When I go [to my wetland sites] I see the blue herons, they are flying. Or I see the bears! This is our treasure, you know? We should keep them clean. We should not let them vanish.”

UPDATE 12/10: The town where Ulus spoke to the town manager about mercury pollution was incorrectly listed as Columbus, North Carolina. The town is actually Columbia, North Carolina, on the Albemarle-Pamlico Peninsula. 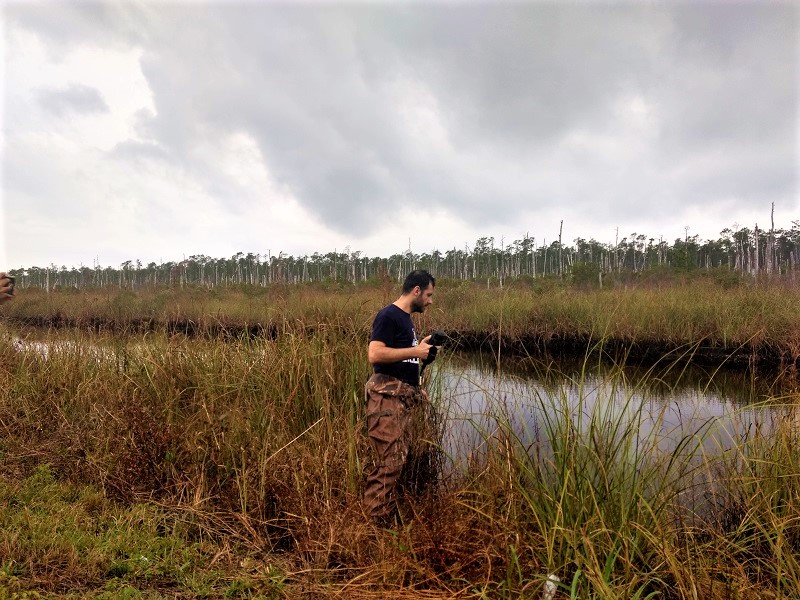 Traveling five hours to his field site, Ulus braves the weather to conduct his research.

Yener Ulus was recently selected as the second-place winner in the People’s Choice category in UNC Greensboro’s Three-Minute Thesis competition, during which he shared this work. Watch a recording of Ulus’ presentation on YouTube here. Congratulations to Yener!

This story was originally published on the N.C. Water Resources Research Institute website.

Catching Up With Daniel Obenour: Advancing the Hybrid Watershed Model

Reconstructing the Past to Understand Impacts on Water Quality

Lise Montefiore, a WRRI and North Carolina Sea Grant joint fellow, studies decades of satellite data to see where and how industrially-owned hog facilities may be impacting water quality.