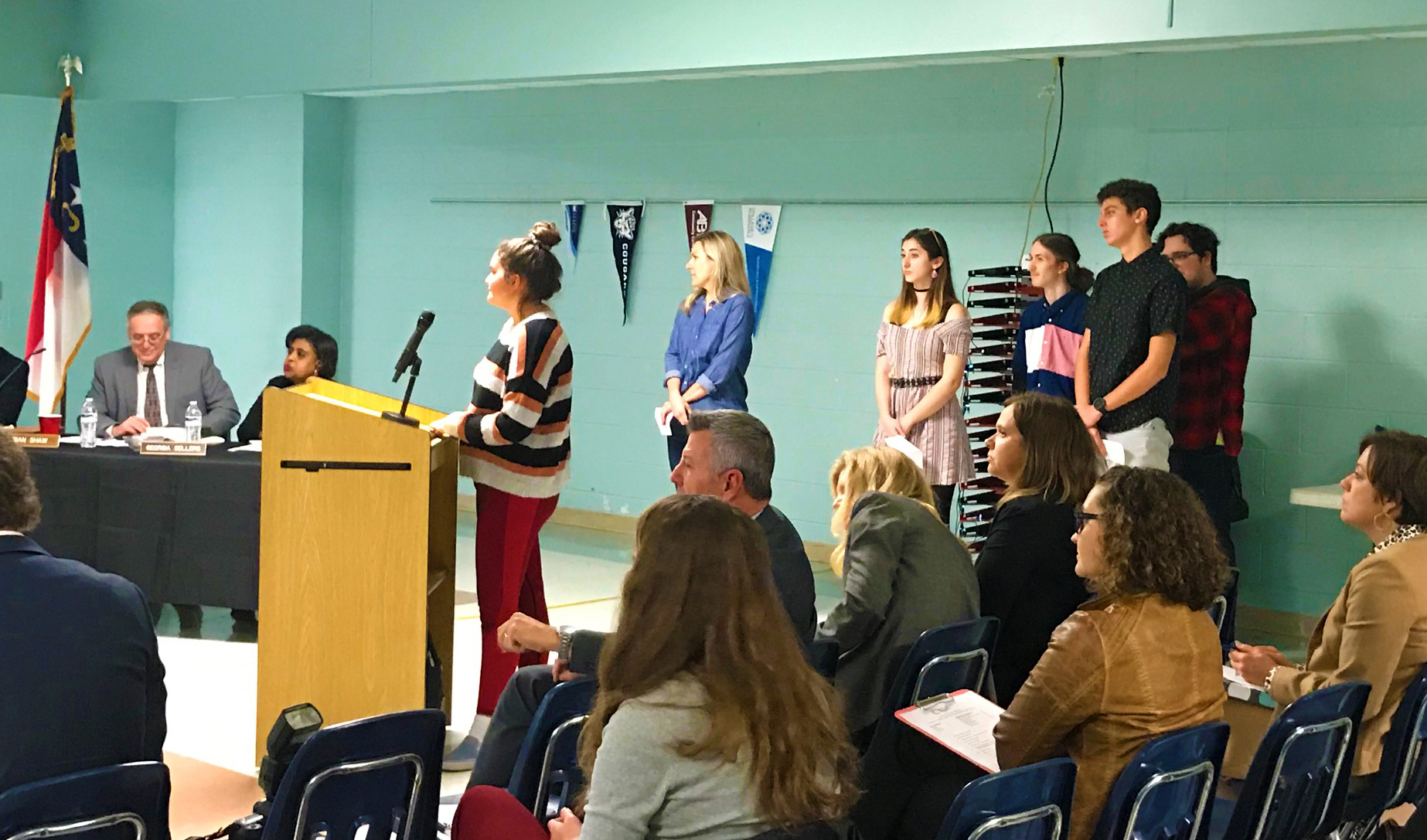 Students present their findings to the Dare County Board of Education.

Evan Ferguson is a 30-year resident of Cape Hatteras, where she teaches at Cape Hatteras Secondary School. She is a mother of two boys who love to fish, surf, and hunt with their father, a tugboat engineer. She worked with North Carolina Sea Grant on the Cape Shark Project and celebrates the state’s coast, fisheries and unique culture. Before the COVID-19 outbreak, her students conducted the “Student Perspectives on Coastal Change” study, which she discusses here.

Hatteras Island’s youth are strong and resilient. “Salty,” some might say. They have grown up on a 70-mile long barrier island on the Outer Banks with flooding, wind, power outages, and weather woes.

Students at Cape Hatteras Secondary School of Coastal Studies are noticing, in particular, that storms and weather are becoming more frequent and more intense. Hurricane Dorian, which hit in September, severely damaged parts of our island and one-third of our school. Students and staff missed nine days of instruction and then had to adapt to shared classrooms and no gymnasiums for months. Two additional unnamed storms battered our coast in October and November, stranding residents on and off the island, due to Highway 12’s closure from ocean tide over wash. Subsequently, students and staff were also unable to attend school during those weather events.

As a result, students at CHSSCS are organizing to understand these increased weather events and advocate for change. A group of 11th and 12th graders in Career and Technical Education Advanced Studies decided to conduct a study called “Student Perspectives on Coastal Change.” The group concluded that a paper survey and focus groups would be the most effective way to collect data from the student body — 358 students in grades 6 through 12. Almost 70% of the student body completed and returned the survey.

Perhaps most importantly, students stated that storms and weather events cause them significant stress and they worry about loss of home, money, or having to move away. Ninety-five percent of students believe that roads, bridges, and buildings will have to change in order for them to continue living here.

It is critical to understand how these weather events effect our students, because such concerns and stressors can impact attendance, behavior, and academic performance.

In the focus group, students talked about how to combat problems resulting from the increase in flooding. They mentioned stricter building codes, including hurricane proof dwellings, and added that they did not believe that anyone should be allowed to build on the ocean or sound fronts.

During the conversation, students indicated certain thin strips of the island that frequently wash over and passionately advocated for allowing the ocean and sound to flow over such places on the island. They appreciated the value of natural inlets, which permit this water flow and presumably relieve stress on other parts of the island, where land would thicken and grow. Over natural inlets, the state could build small bridges or causeways, similar to the Florida Keys.

Questions remain. However, students also realized that they have the power to advocate as the next generation of change-makers on our island. They met up with a local county commissioner to address concerns and brainstorm solutions, and they already have presented their findings to the Dare County Board of Education in February.

Evan Ferguson presented about this study at the 2019 North Carolina Coastal Conference.