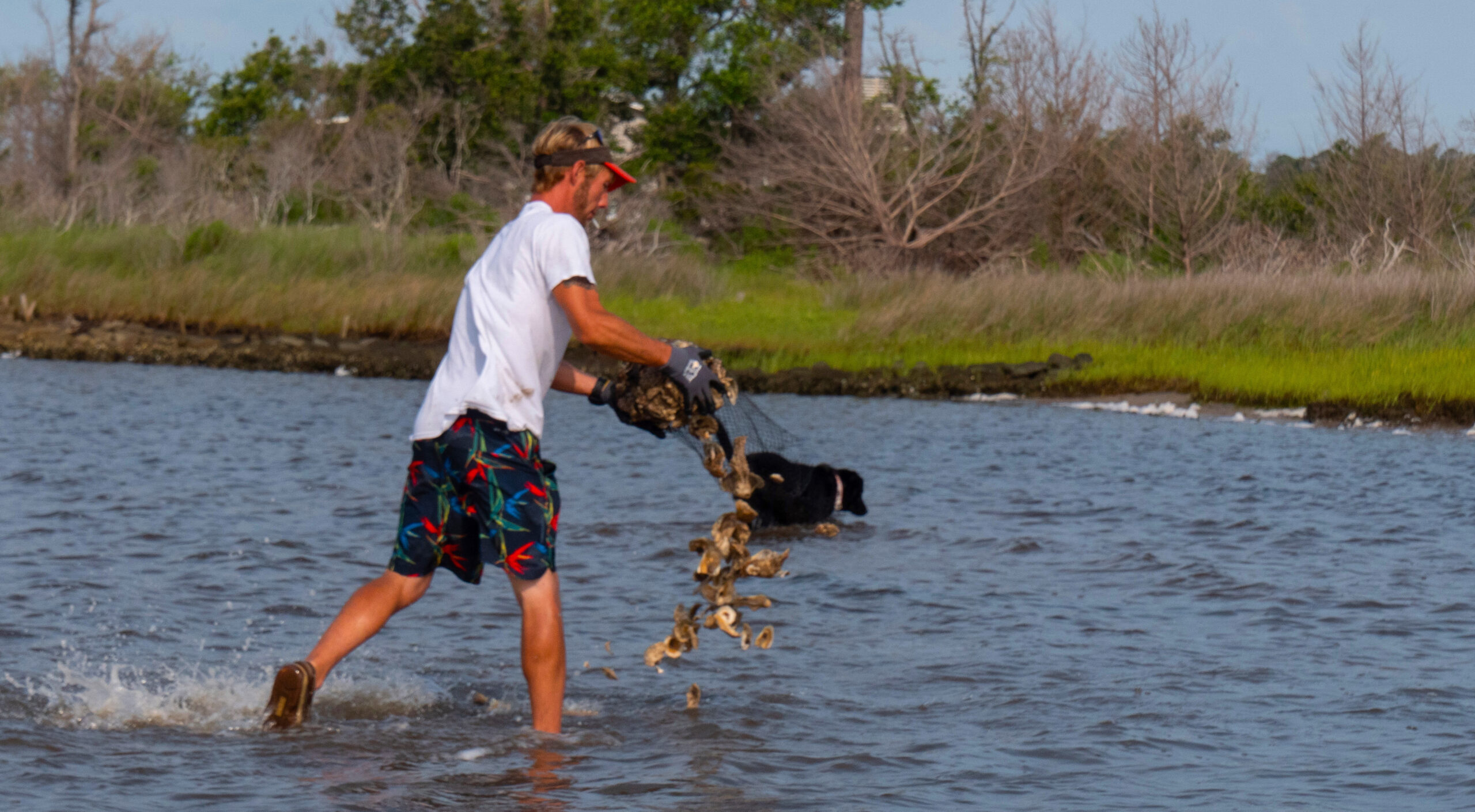 The project team has had two deployments this summer. Jarrett Bay, off the Core Sound, was the initial spat-on-shell deployment site, followed by a site in North River. A deployment also is scheduled for the Newport River in spring of 2021. 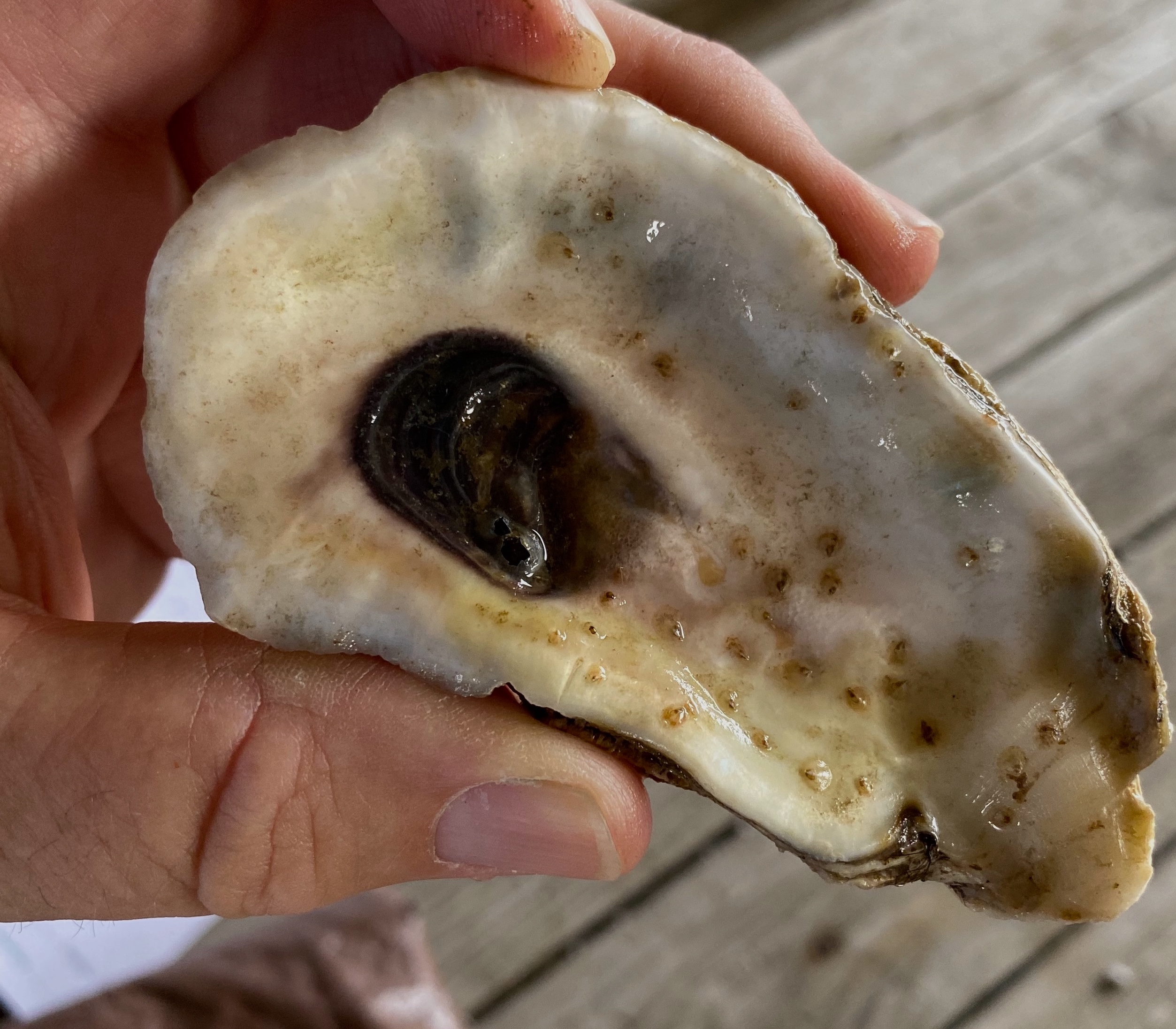 The project’s first deployments of “spat-on shell” was in mid-June. Small brown ovals are juvenile oysters that have set on an old oyster shell. All photos courtesy of John Lambeth (NCFBF).

“Recent storms like Hurricane Florence have impacted wild oyster populations,” says Frank López, extension director for North Carolina Sea Grant. “Spat-on-shell culturing allows oysters to be started as larvae in a nursery setting. As the larvae permanently attach to oyster shell in climate-controlled tanks, they are known as ‘spat.’ The spat-on-shell then can be deployed in sounds. The spat grow into adult oysters in this natural setting — and can form dense oyster beds over time.”

López credits Debbie Hamrick, director of specialty crops for the N.C. Farm Bureau Federation and an advisory board member for Sea Grant, with helping to initiate the collaborative demonstration project.

Susan Hill, owner of Down East Mariculture in Williston, is serving as the commercial nursery partner. “Susan is investing in the coastal economy by repurposing ‘Elmer’s Old Clamhouse’ in Williston as a commercial shellfish nursery,” Hamrick notes.

“It’s not every day that a native daughter returns home to give back to the community in a way that builds the economy for the future. She’s dedicated hours and days to ensure that the oysters we place in North Carolina’s waters are healthy, acclimatized, and have multiple spat attached. Her focus on the art and science of shellfish production and her dedication to assisting North Carolina’s commercial fishing community is unparalleled,” Hamrick adds.

“Not only do oysters provide economic benefits as an important fishery, they also provide many ecosystem services such as water filtration, shoreline stabilization, and habitat for different fish and other marine life,” says Jacob Boyd, habitat and enhancement section chief for the N.C. Division of Marine Fisheries.

The value of the project also includes the strong collaborations to complete each deployment.

“It’s been great to see the fishing industry, N.C. Division of Marine Fisheries, N.C. Farm Bureau, and N.C. Sea Grant working together on a project that has the potential to produce real economic and ecological benefits to eastern North Carolina,” says Glenn Skinner, executive director of the N.C. Fisheries Association. “I’m proud to say the fishermen have really stepped up to make this project a reality. Without their hard work, none of this would be possible.”

In addition to the project participants, community volunteers have been helping Hill in the oyster nursery located in Carteret County’s Down East region. 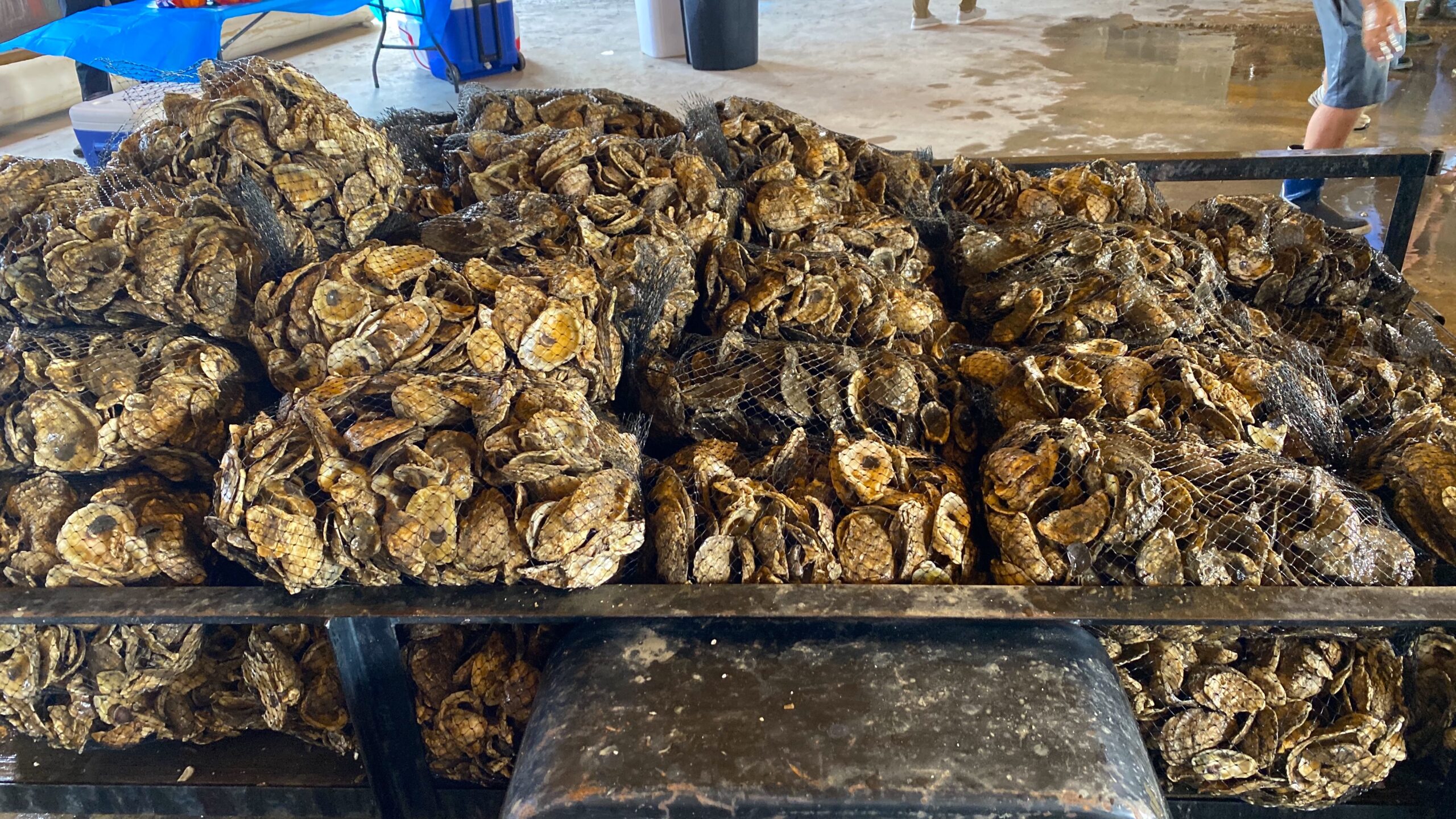 For more information about this project, contact Frank López: fmlopez@ncsu.edu