Under the most optimistic scenarios, seas will rise worldwide over the next 8 years to levels that are a foot higher than they were in 2000, according to the National Oceanic and Atmosphere Administration models. Not surprisingly, research predicts rising sea levels will continue to have significant impacts on low-lying coastal habitats. 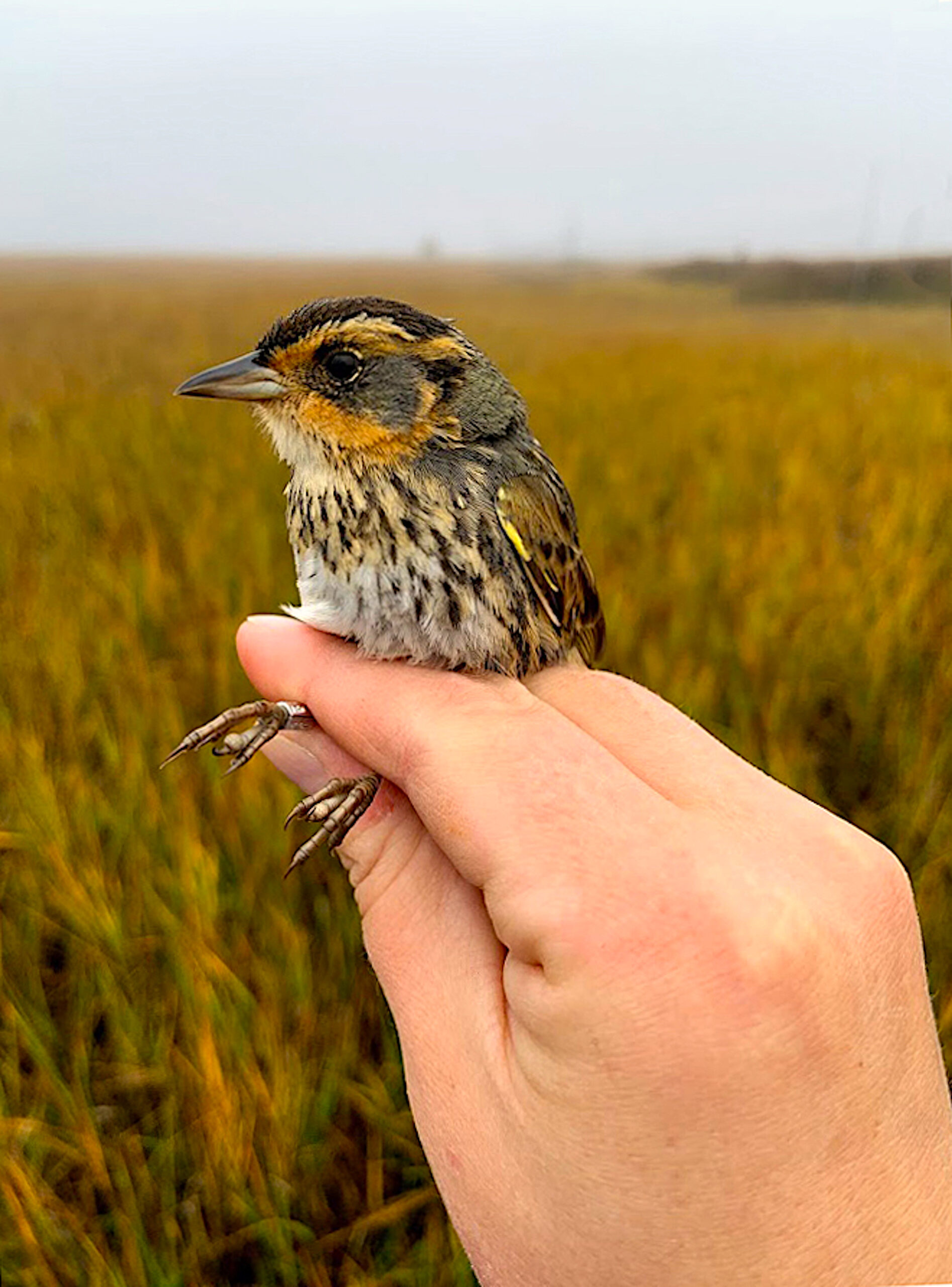 Salt marshes — coastal grasslands that flood — filter nutrients and reduce the impact of coastal storms by absorbing wave energy. They also serve as habitats for aquatic and avian species. Both the saltmarsh sparrow and seaside sparrow are “tidal marsh obligates,” meaning that they spend their entire lives in tidal marsh ecosystems.

Although sea level rise can cause salt marshes to increase in elevation, research has found that sea level rise and habitat loss across the expansive marsh habitat of coastal North Carolina potentially imperils marsh species.

“When the sea rises, the marsh and plants can drown because of the water inundation, which shifts marsh habitats into unstable habitat for our sparrows,” says Marae Lindquist (above), a doctoral student in biology and marine biology at the University of North Carolina Wilmington. “If habitat declines or is degraded, it can lead to population declines for the species that depend on that habitat, especially like saltmarsh and seaside sparrows.”

As a recipient of the 2019 North Carolina Sea Grant and N.C. Sentinel Site Cooperative Joint Fellowship, Lindquist is studying the effects of sea level rise on two areas in southeastern North Carolina — Masonboro Island and Bald Head State Natural Area — in order to help predict changes in the numbers of saltmarsh and seaside sparrows.

Under the direction of Raymond Danner at UNCW, Lindquist is modeling habitat changes at low, moderate, and high levels of sea level rise through the year 2060. Her research will help determine the future effects of sea level rise on habitats of both the saltmarsh and seaside sparrow. Her work will serve as a valuable tool for the U.S. Fish and Wildlife Service to inform upcoming decisions about whether to list the saltmarsh and seaside sparrows as endangered or threatened. 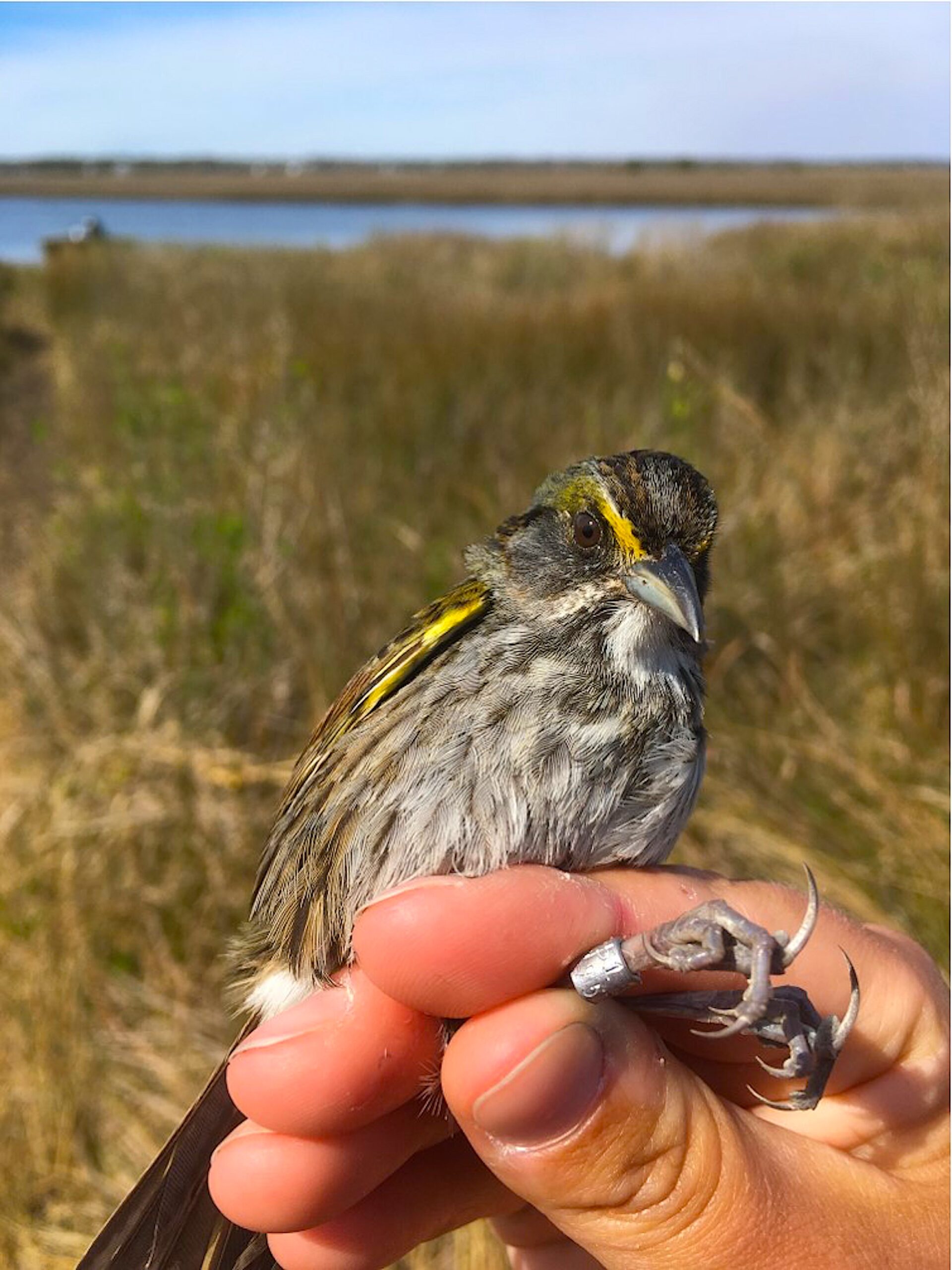 The saltmarsh sparrow lives along the East Coast of North America. As a result of climate change and other human-influenced impacts, saltmarsh sparrow breeding populations have declined by 9% annually since 1998; research predicts that without future conservation efforts, these sparrows will go extinct by mid-century.

The lives of saltmarsh and seaside sparrows are very secretive.

Both species spend most of their time on the ground, foraging at low tide under the cover of cordgrass found in coastal saltmarshes. When the tide rises, the sparrows will recede into higher marsh habitat. Once the marsh grass cover disappears, their habitat is no longer safe from flooding or predators.

Working in the Marsh

“A lot of wonderful research is being done on breeding grounds, but there is a gap in knowledge in the impacts of sea level rise in the wintering grounds,” Lindquist says.

“Although the marsh grass looks a bit drab in the winter, it really accentuates the beauty in and around the marsh, such as a flock of ibis foraging or a saltmarsh sparrow blending into the cordgrass after being released. It wasn’t uncommon when traveling to our field sites to come across beautiful nature, such as a pod of dolphins or large flocks of cormorants.”

Lindquist, her research partner, Evangelyn Buckland, and her undergraduate research technician, Sofia Campuzono, used the daily tide levels to determine whether they would be doing “mark-recapture,” “radio-telemetry,” or both. On mark-recapture days, the team set up nets in high marsh habitats above high-tide level, which allowed for the capture of more sparrows than at low or mid-tides. 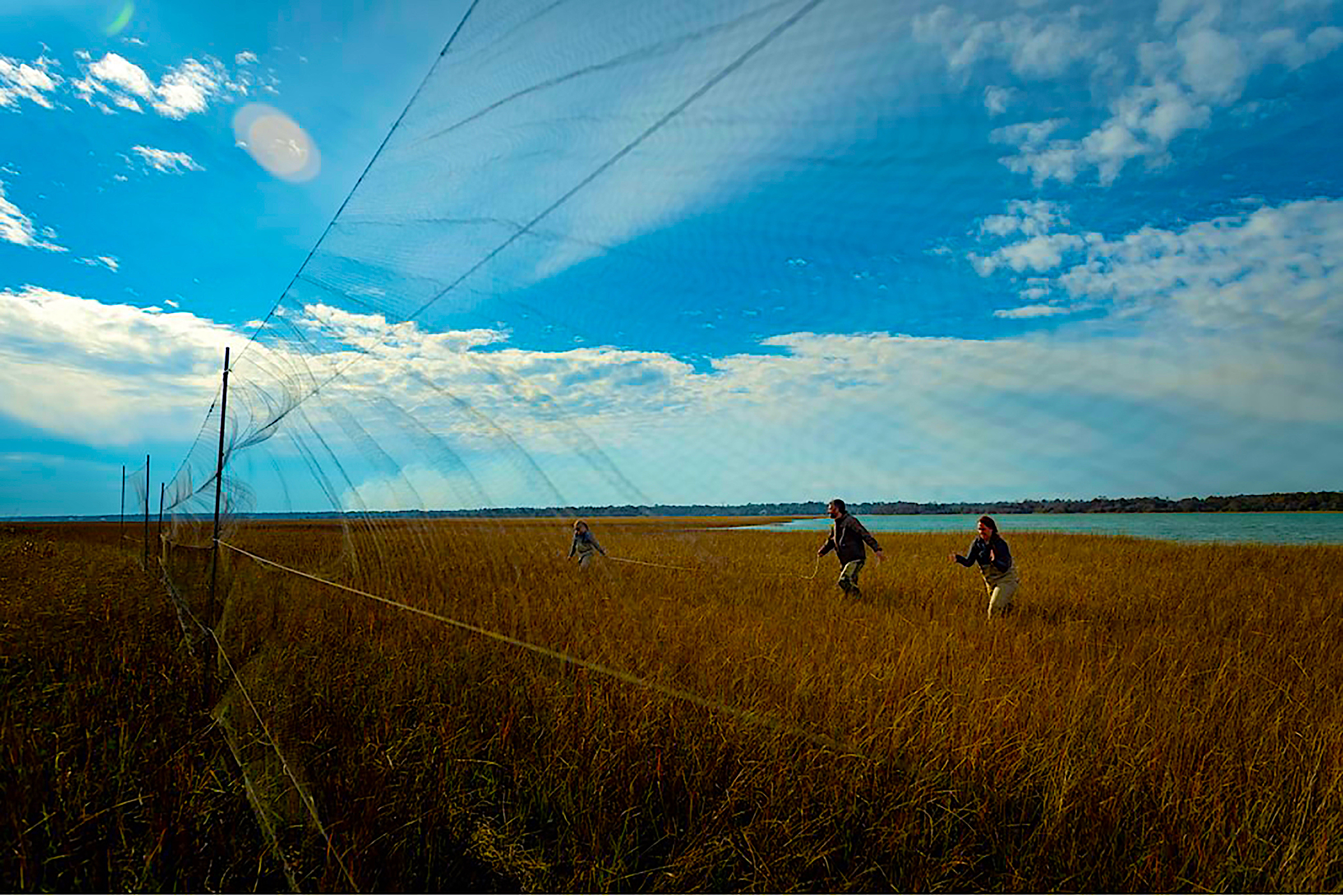 Lindquist and her team actively flushed the birds into the nets, extracted them, and took body measurements. The team also attached radio tags to a subset of sparrows in order to track their movements through the marsh, gathering data to help understand the sparrow’s territory and habitat use, as well as to determine the overall population density of the species.

“When you are going into the field almost every day, working around tides and weather is always the hardest part,” Lindquist says. “For one of our sites, we had to take a boat, and sometimes we could not get into the field on windy days, because we use a little jon boat to get into shallow creeks to get to our field sites.”

Although Lindquist, Campuzano, and Buckland spent days in the field collecting data, they completed most of their work in the lab. Undergraduate researcher Cassidy Mason helped with running sea level rise models, using existing spatial data from NOAA and habitat data from the U.S. Fish and Wildlife Service’s National Wetland Inventory.

“Cassidy did a great job,” says Lindquist. “Most of the research was computer-centric and modeling-centric.”

In combination with the data Lindquist’s team collected in the field, they now could predict the future populations of saltmarsh and seaside sparrows.

“These findings have major implications for the abundance of sparrows at both study sites,” Lindquist explains. “Our models show that without marsh mitigation, winter habitat will decrease a lot by 2060.”

In fact, she predicts marshland habitat in the two areas in her study that now support 305 saltmarsh and seaside sparrows will decrease so significantly that it will only support about 25 sparrows total.

Although Lindquist only has population estimates for a small area on each island, the predicted habitat changes were widespread across the Masonboro Island and Bald Head State Natural Area.

Lindquist’s new NOAA Margaret A. Davidson Fellowship will allow her to expand her research over the next few years. She plans to re-run all of her sea level rise configured models with added parameters and higher resolution data. These models, in turn, will provide a framework to address and conserve other species of concern. 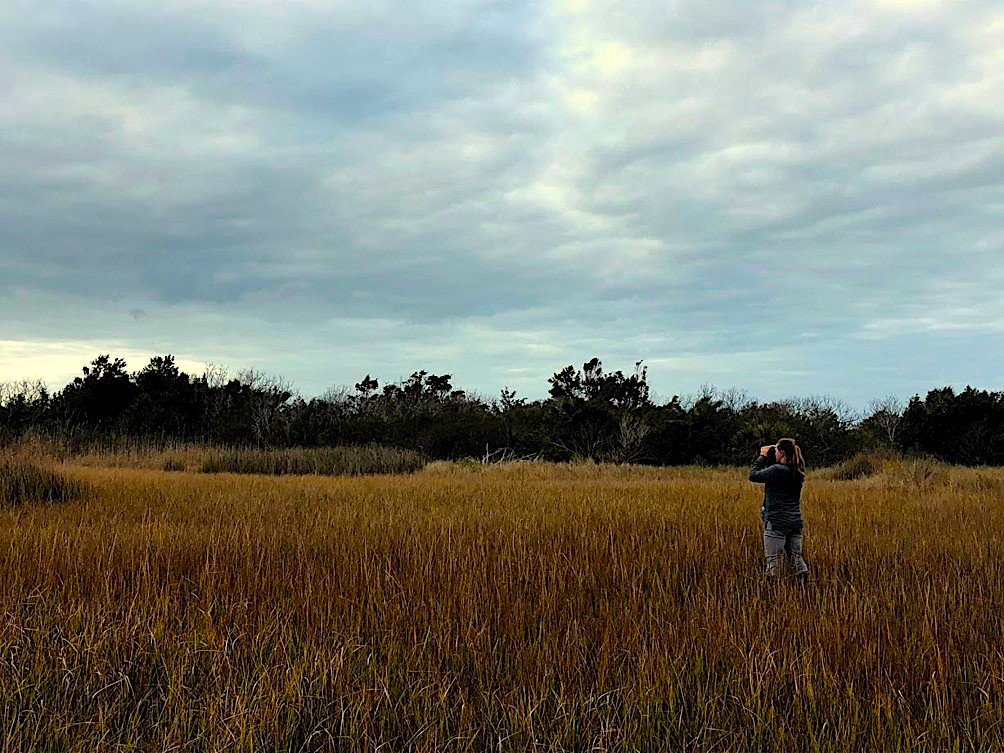 “I always love going into the field and really being in the place where these birds spend their whole lives,” she says. “The marsh in the winter is one of my favorite places to spend time.”