Summer and Fall Bring Bioluminescence to the Outer Banks 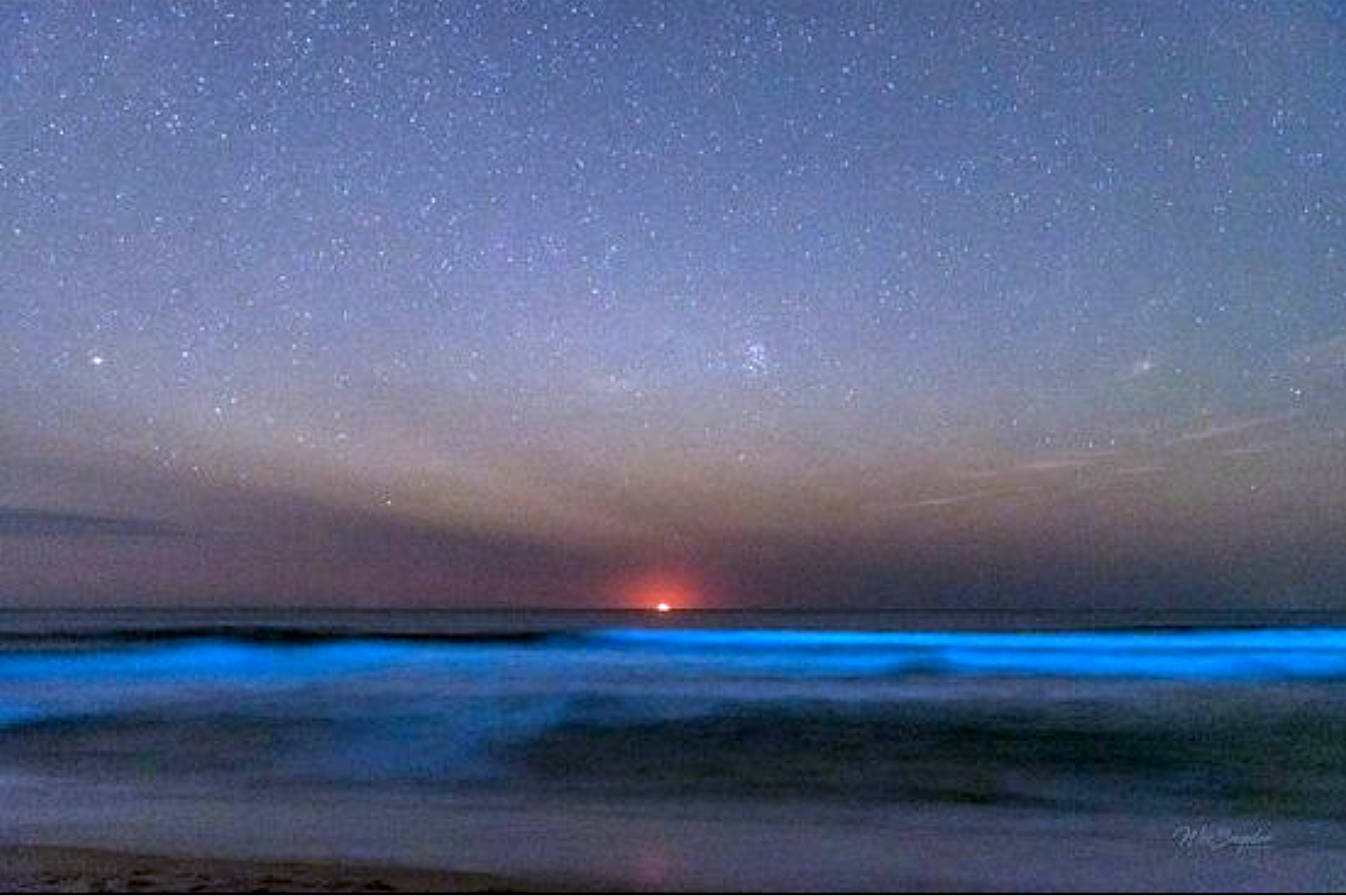 This article originally appeared in The News & Observer and is reprinted here with permission of McClatchy News. Photo courtesy of Wes Snyder: wes-snyder-photography-calendar.myshopify.com.

One of the Outer Banks least talked about phenomena has been brought to light by a photographer who spotted “glowing waves” off Cape Hatteras.

Wes Snyder’s description of the moment is eerie. He was standing on a pitch black beach, photographing the Milky Way, and looked down “to see nothing but beautiful blue waves.”

The fluorescence faded before he could get a good photo, but the haunting scene created an obsession for him. Snyder returned to the same beach — over and over and over — hoping the bioluminescent waves would return.

Last fall, after two years of failed attempts, Snyder got the photos he hoped for (including the one above), and they show the waves exactly as he described: Glowing and blue.

“I was definitely stunned. … It’s quite an amazing thing to witness,” Snyder said. “It appears that the crashing waves are extra white and glowing. It lights up as the waves crash. … It stopped me in my tracks, and I knew right then that I wanted to capture it.”

The photos were taken off Coquina Beach at Cape Hatteras National Seashore, and park officials told McClatchy News they were not aware bioluminescent waves were being reported in the area. Officials at nearby Cape Lookout National Seashore said they were also unaware of the waves.

National Park Service officials say the blue color is likely caused by microscopic dinoflagellate plankton floating in the water. The plankton “make their own food using photosynthesis,” and bioluminescence is a byproduct, the NPS says. The plankton is typically found in tropical waters, but can be swept farther north if the conditions are right, experts say.

“A common name for these organisms is sea sparkle. … When these organisms are moved by waves or the paddle of a kayak or canoe, the light becomes visible,” the National Park Service reports. “The best times for viewing bioluminescence is in the summer and fall on dark, cloudy nights before the moon has risen or after it sets.”

In 2016, multiple reports of “electric blue” waves were documented along the Outer Banks. The University of North Carolina’s Coastal Studies Institute credited the glow to a “southeasterly flow of wind and waves that pushed” the plankton out of the Caribbean, according to the OuterBanksVoice.com.

Snyder, who has a national following for his Outer Banks images, says the waves are “common knowledge” among locals, but even long-time residents say they can’t predict when and where they will appear. He eventually found photos other people had taken of the waves, adding fuel to his passion to get his own images.

“It seems to be at completely random times,” Snyder told McClatchy News. “To be able to actually get blue waves is quite rare. … I’ve only been able to capture blue waves a handful of times. The unpredictability of it really makes it hard and challenging. But to me as a photographer, that’s what I live for, and why I love being a photographer.”