Posts from a Facebook group revealed when and where anglers caught hickory shad and American shad  — and even how they did it.

Hickory shad and American shad are anadromous species, meaning they are born in freshwater, migrate to the ocean to grow and mature, and return to freshwater to spawn. They are also highly sought-after sport fish that recreational anglers target during the species’ spring spawning runs.

American shad populations along the East Coast are at all-time lows — and they do not seem to be recovering. Hickory shad, on the other hand, has an unknown coastwide population status.

I mined posts from a Facebook group, compiled information on fishing location, catch information, and angler demographics, and analyzed the data for trends. In particular, I focused on determining when and where anglers were catching hickory shad and American shad, as well as if the locations and catches changed over time.

Based on Facebook posts, anglers had more successful captures with pink, chartreuse, and silver grubs and spoons.

Posts also revealed that locks and dams blocked access to upstream historical spawning habitat. For instance, the Milburnie Dam of the Neuse River was removed during the study period, and anglers then caught more fish above the dam than in previous years.

Trends indicated an increase in American shad catch over time, suggesting that the Neuse River American shad stocking program that began in 2012 is benefiting the species.

Social media could be a cost effective and efficient avenue to collect large amounts of supplementary data on a relatively data-poor fishery. Sites such as Facebook increase the number of potential study participants and the likelihood of obtaining information on short-lived events, such as a spring spawning run. Facebook posts can also provide data about a larger geographical area, which in most cases would not be accessible with limited funding available.

With regard to American shad and hickory shad, a co-management approach that incorporates both knowledge from recreational fishermen, possibly by way of social media, with knowledge obtained through other forms of research would better inform natural resource management in the river systems of North Carolina. 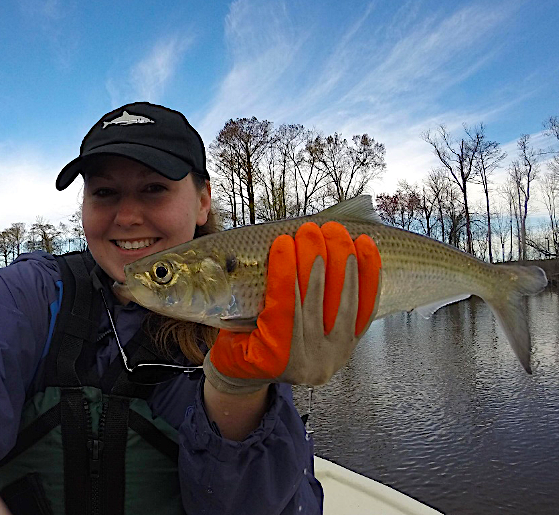 by Samantha Dowiarz (left), who graduated with an MS in biology from East Carolina University after completing the research presented here as part of a master’s thesis under Roger Rulifson

« Do Water Snakes Get Thirsty?
Where Are You Most Likely to Find Juvenile Atlantic Menhaden? »