Creating no-harvest zones on oyster reefs helps the fish and crustaceans living on the reefs, too.

In the 19th century, the Chesapeake oyster fishery was the largest in the world. However, due to habitat degradation, disease-causing parasites, and over-harvesting, the number of oysters in the bay has significantly decreased.

Oysters have been the subject of intensive management efforts, but there are many gaps in our understanding of oyster reef ecosystems. We know oysters provide many ecological services, such as water filtration, nitrogen removal, and habitat for other species.

At the Smithsonian Environmental Research Center, we were interested in seeing how protecting oyster reefs affects other species that live around them, specifically fish and crustaceans.

I was interested in seeing whether there was a higher abundance and diversity of fish and crustacean species on harvested or non-harvested oyster reefs.

To answer this question, I analyzed GoPro video footage of oyster reefs from three tributaries in the Chesapeake Bay: the James, Great Wicomico, and Choptank rivers. Each tributary had one reef that was actively harvested and a neighboring reef where harvesting was prohibited. After watching the videos, I compared the number and types of fish and crustaceans in oyster sanctuaries compared to harvested zones.

This study provides evidence that fish and crustacean species benefit from creating no-harvesting areas and highlights the importance of oyster reefs for healthy ecosystems. Expanding this study to more sites could provide new data to help guide oyster reef management in the future.

The James River had a higher abundance and diversity of organisms compared to the other two sites.

In addition, I was able to identify many different species of fish and crustaceans in the GoPro videos of the tributaries, including striped bass, summer flounder, and black sea bass, as well as blue crabs and grass shrimp. What’s more exciting is that some of these species, like striped bass and blue crabs, are federally managed. Spotting them in our videos is a good indicator that the species benefit from no-harvest zones.

Focusing our efforts on protecting valuable oyster reef habitat will not only benefit oysters but also the important fish and crab species that depend on them. As the demand for oysters increases and affects the oyster fishery, it is critical to understand how this might impact the broader ecosystem of the Chesapeake Bay. 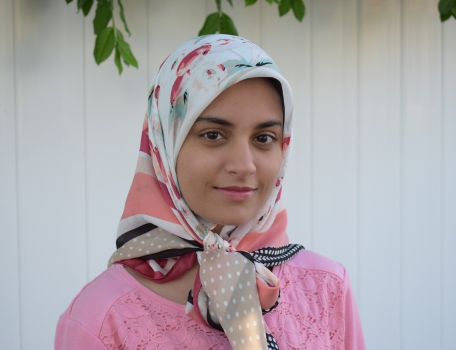 By Aiman Raza, an undergraduate at the University of Maryland, Baltimore County. She is a biology major and environmental science minor and plans to attend graduate school to become an ecologist. Last summer, she interned at the Smithsonian Environmental Research Center in the Fisheries Conservation Lab.

« Where Are You Most Likely to Find Juvenile Atlantic Menhaden?
Can Self-Releasing Hooks Minimize Fish Injuries During Catch-and-Release? »